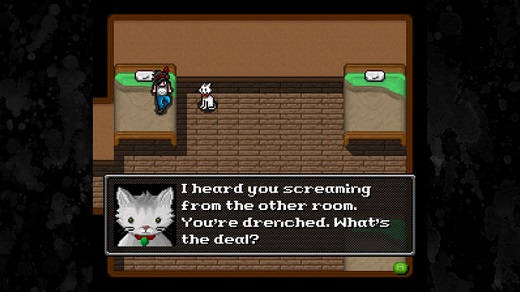 HIGH The final battle, which put together Boyd's powers in an interesting way.

"Gimmick" isn't necessarily a dirty word. Many good (even great) video games have been built to emphasize a single gameplay idea. To succeed at that tactic, though, requires the unique mechanic to be thoroughly explored and integrated completely on multiple levels. Unfortunately, that's not what happens with High Strangeness.

High Strangeness bills itself as a "12-bit RPG" because it allows the player to switch between 8-bit and 16-bit presentations. The crude graphics and reduced palette of the former look aren't the only change; characters and enemies become less nimble in the 8-bit view as well. This mechanic has some interesting ramifications. For instance, certain enemies can aim at the player precisely in 16-bit view, but can only fire in 8 directions in the more primitive view.

For the most part, however, the 8-bit view is used to grant the player more information. Hidden paths and additional information appear when the player downgrades. This is as it must be, because High Strangeness feels sluggish and kind of unpleasant to play in this mode, and this treatment ultimately neutered the mechanic because unless certain puzzles made it absolutely necessary, I wouldn't have used it.

Something clever could have been done with swapping between the two modes—the developers obviously had some ideas along these lines—but ultimately the mechanic never bears fruit. One kind of enemy becomes mildly easier to beat in 8-bit, but by and large the limitations of 8-bit motion don't produce any tactical advantages. As a result, 8-bit disappointingly turns into just another "secret glasses" mechanic, and most of the largely uninspired puzzles rest on more conventional tools.

The narrative mostly passes over the swapping, too, and instead centers itself on boring JRPG-inspired guff. I see from my notes that the main character's name is Boyd, but without this assistance, I wouldn't possibly remember anything about him.

The story he inhabits doesn't prove much better. There's something about an ancient conspiracy to do evil (or possibly good?) and crystal skulls are important. There's also a twist so inane it almost put me to sleep. The narrative moves quickly due to the game's brevity, and its characters are so rote and unmemorable that none of its events develop the slightest emotional impact. It's a shame, because the exposition dumps are accompanied by beautiful watercolor pictures, but the narrative doesn't do the art justice.

The plot gives Boyd an excuse to run around six or seven relatively small areas that tend towards the brown, whacking ghost-men and sundry other enemies with a flashlight. The action combat has a strange rhythm because Boyd's flashlight has such short range that actually executing a combo generally means getting hit. Combos aren't easy to execute with any regularity anyway, thanks to a punitive stamina system. These factors promote a silly-looking hit-and-run cycle. Or, because supplies are infinite, Boyd can just run around leaving sticks of dynamite for all his enemies to run into. This was how I dealt with most boss fights.

Despite failing its unique mechanic High Strangeness does occasionally do interesting things. Its final battle in particular is unusually satisfying for a puzzle-fight, and I also enjoyed a mid-game digression that required me to play as Boyd's cat. Those watercolors, too, I could look at for hours. These highlights, however, aren't enough to compensate for High Strangeness's barely-there story and threadbare mechanics. A gimmick can make for a classic game if done well, but High Strangeness doesn't develop its ideas enough to get there. Rating: 5 out of 10


Disclosures: This game was obtained via publisher and reviewed on a home-built Windows 7 PC equipped with an Intel i7 processor, 8 GB RAM, and a single Radeon R9 270X graphics card (game was played on default graphical settings). Approximately 3 hours of play was devoted to single-player modes (completed once).

Parents: According to the ESRB, this game contains violence. True enough, but this violence is limited to whacking ghost people with a flashlight so I don't think it's of any concern. The ESRB rating seems like a vast overestimate to me.

Deaf & Hard of Hearing: There's no voice acting nor are there any essential sound cues. Color-blind individuals may have trouble because the final boss requires correct matching between the color of its heads and a color associated with one of Boyd's powers. Because these colors include red, green, and yellow, many common forms of color-blindness may render this battle very frustrating.