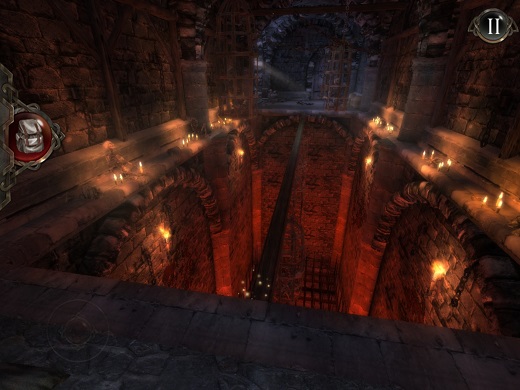 HIGH Defeating an enemy by dying with it.

WTF You guys do understand that an empty pot weighs just as much broken as it does intact, right?

Hellraid is a first-person melee game destined for PC and HD consoles in 2015, which has apparently already earned enough of a franchise push to get a mobile tie-in in the form of Hellraid: The Escape. The iOS title shares little beyond its setting and overall aesthetic with the flagship it's supporting. Hellraid will be a visceral brawler, but The Escape is a short and somewhat disappointing puzzle game.

As one might expect based on the name, The Escape is set in a drab medieval dungeon, liberally decorated with the skeletons of previous inhabitants. They must have been spectacularly unlucky fellows, because the player's character (an amnesiac, natch) wakes up in a tomb each time he gets roasted, spitted, or cleaved in twain by a giant axe. Death comes without much of a penalty—puzzles in the area keep their state of completion and the protagonist retains his inventory. This allows the game to get away with several cheap-trick deaths without becoming too annoying, and in fact, some of the puzzles can only be solved by leaning on the protagonist's ability to reincarnate.

Aside from an ability to pop out of a tomb each time he bites it, the protagonist's only advantage is a fellow prisoner who somehow manages to leave a few notes behind. This passes for the game's narrative, which has no remarkable features beyond a limp twist right at the end that is not really built up to by previous events.

The end arrives quickly. The Escape is not a long game, with only seven "chambers" full of puzzles for the player to surmount. Each area has 3-6 puzzles of various kinds, most of which pose more of a physical challenge than an intellectual one, yet it still includes plenty of tips.

The protagonist can do things like throw stones to turn levers, make alchemical potions to allow faster movement, take control of a rolling eyeball, or cast a spell to investigate the environment. Most of these end up being one-use abilities. Rather than building up a set of tools and letting the player use them in concert, The Escape doles them out one-by-one, giving it the feel of being an extended tutorial for itself.

The Escape does a passable job with what it has. I found the touch controls to be a bit twitchy, and the virtual joystick produced movement that was unaccountably sluggish at times. The forgiving mechanics of death stole most of the sting from those problems. More annoying were the tilt controls that showed up for walking along beams and solving some puzzles. I found these to be unpredictably skittish and unforgiving; failing at these tasks never taught me anything useful for passing them the next time.

It's tough to judge Hellraid: The Escape as a success. It's a decent introduction to the setting, but since it relies on light puzzle solving rather than brawling, The Escape seems disconnected from the game it's heralding. As a puzzle game in its own right it's mildly diverting, but doesn't hold up against the platform's best in any real way. Perhaps the additional levels the menu promises will improve the value, but as it is, The Escape is a macabre trifle one need not seek out. Rating: 5 out of 10


Disclosures: This game was obtained via publisher and reviewed on an iPad with Retina display. Approximately 4 hours of play was devoted to single-player mode.

Parents: As of press time this game has not been rated by the ESRB. The App store rates this game 12+, which seems like a fair assessment. There are some disturbing-looking monsters, rooms full of skeletons, bloodstains, and an occasional glimpse of the player-character's own dead body. There's nothing here worse than a run-of-the-mill horror movie, though.

Deaf & Hard of Hearing: Most of the story is conveyed through written letters and there are subtitles for everything else. However, the location and readiness to attack of the game's few enemies are conveyed by sound.