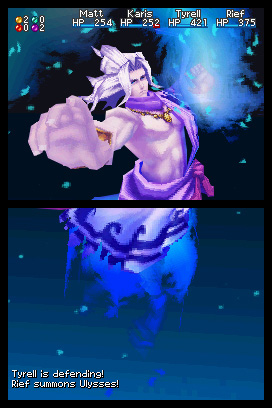 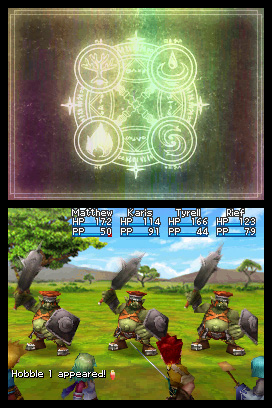 HIGH Going through the test area that recaps the previous games.

LOW Getting to the end of the game and realizing that it was the middle of the story.

WTF Why can't anyone just say what they think is happening?

is competent—perhaps even very competent. Its systems work well, most of the information players will need is fairly easy to access, and the pace of its progression has been tuned nicely. Unfortunately, that's the best that can be said about it. Beyond the sheer quality of its assembly, Dark Dawn has little to offer.

To begin with, it's difficult to say what Dark Dawn is about, exactly. It starts off as a light-hearted journey undertaken by the children of the preceding Golden Sun games' heroes, starts to engage one threat to the world, then busies itself worrying about a completely different apocalyptic danger. Certainly it isn't a story about how the characters change. Thanks to a flabby roster, the game barely has enough time to outline a group of static, stock party members. Even the putative protagonist doesn't speak, communicating exclusively in emoticons chosen by the player.

The story isn't helped by the fact that characters who clearly have an idea what's going on consistently refuse to explain what they know, even when it would make sense to do so. Within this game's narrative, this merely serves as an artless attempt to make the ordinary plot seem more mysterious and exciting than it actually is. When the cliffhanger ending rolls around and reveals that Dark Dawn is only half a story, it's clear that the reticence of these characters is also meant to preserve twists for the inevitable sequel.

It can be easy to overlook the shortcomings of the story, however, because Dark Dawn plays remarkably well. It's a puzzler as much as an RPG—the characters have "psynergy" powers that allow them to blow winds, grow vines, move rocks, and so on as a means of traversing the environment. Dungeons and towns are thick with points where these powers are needed, although only a few spots pose a real challenge in planning or execution. In recognition of this, the enemy encounter rate is fairly low overall, and usually drops to zero in rooms that have many interaction points. Fortunately the experience yields are relatively high, so that character progression is sustained despite the low number of battles. 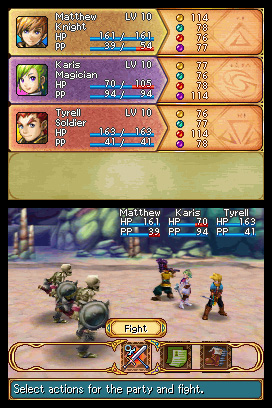 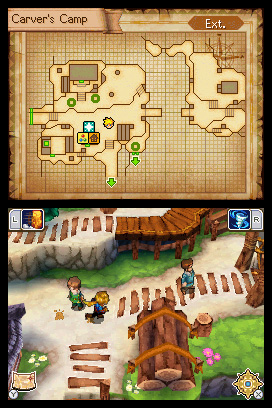 When a fight begins, however, Dark Dawn starts to show some weaknesses. This isn't a matter of fundamentally deficient design, although the game has the problematic stop-and-go pacing typical of round-based combat systems. The real issue is one of balance, and it's a matter I'm generally reluctant to raise because I know that players have different skill levels. This, however, is a case where the problem is undeniable.

The plain fact is that Dark Dawn is too easy. Every character has devastating spells available, and psynergy power recharges quickly, often refilling completely between the sparse battles. Unless the player wants to make the game more difficult than it has to be, every fight is simply a matter of dialing up the magic attacks and waiting for the experience points to roll in. No tactical considerations are necessary; one need not even take any real account of enemy elemental weaknesses. Occasionally a character levels up and learns a new spell, the elaborate animation of which is the only relief from the general boredom of fighting. Only the final boss, an absurdly difficult fight that feels totally out of place with the rest of the game, punctuates the triviality of combat.

An additional level of tactical diversity added to spice up the combat comes from the djinn, magical creatures that are attached to the characters. Outside of boss battles, however, they were completely superfluous, and I used them rarely. Their function is to dictate a character's class, and hence his statistics and available spells. While Dark Dawn made it easy to see the effect of a particular change to the djinn roster, the most beneficial combinations were almost completely unpredictable, making character optimization a tedious trial-and-error process.

One could make a few other quibbles, particularly with the unwieldy inventory system, but there's little else in the gameplay to criticize. Like much of Camelot's output, Dark Dawn has strikingly well-designed fundamentals and plays very smoothly. In every other way, however, the game is depressingly unambitious, contenting itself with tactically uninteresting combat, pedestrian world design, and an incomplete story with little emotional impact. It may be handsomely made, but that doesn't save Golden Sun: Dark Dawn

Disclosures: This game was obtained via retail store and reviewed on the DS Lite. Approximately 24 hours of play was devoted to single-player modes (completed once).

Parents: According to the ESRB, this game contains mild fantasy violence. A few characters die, but there's nothing that's really disturbing.

Deaf & Hard of Hearing: I played most of the game on mute without any problem. There is no voice acting and there are no important audio cues.

One thing I can say about this game is that it’s definitely for fans only. The easiness of its gameplay made me focus completely on the plot, which is awesome. Keep in mind that I’m a total Golden Sun fanboy, but the things I valued most in GS and GS:TLA were the plot and the music. In Dark Dawn they’re just great and it’s all I could ever ask for. And no, it’s not true that there’s just one tough battle in the whole game. If you care to do more than just get through the game in 24 hours… Read more »

I think it’s a good game.I like the ending very much (yeah i realize it’s only in middle of the story, but the first golden sun was like this, right??). This mean we can get a good sequel (hopefully, in 3DS or even NDS).

I believe the continuation of this game will better like GS:TLA>Golden sun.

The review makes the game sound like Wild arms 3. 0-o Only it plays better!!11

Dark Dawn‘s random battles would be too easy even if the intended audience was dachshunds. Being “just for kids” (and I’m not sure that Dark Dawn was intended that way, though it’s obviously light-hearted) is no excuse for serving up dull combat. Kids are inexperienced, but they’re not stupid, particularly when it comes to figuring out how to play games. I’m not asking for Shin Megami Tensei-level difficulty here, but combat should at least be tough enough that you can’t just roll out the exact same approach in every battle no matter what the enemy. That doesn’t happen in Dark… Read more »

I’m sure you’re right about the battles being too easy to be fun for grown-ups, but this looks like a game for kids, no?