But will they pay heed? 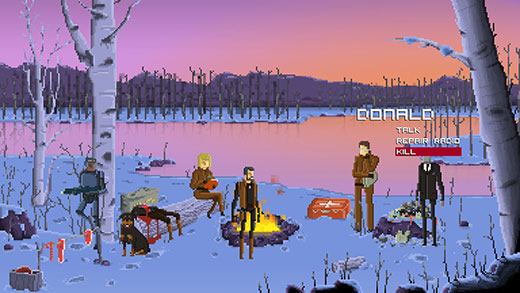 HIGH Getting all that help from the dog.

LOW Getting the last Xenolifer to give up his part of a four-part password, only for it to be a duplicate of a part I already had.

WTF This dead guy just popped up as a hologram for one line of dialogue?

Gods Will Be Watching is the follow-up to a flash game released last year out of a ludum dare competition, and a good demonstration of the axiom that more isn't always better. As a small, flat title, it was an interesting exercise in system dynamics. As a larger, linear one, Gods Will Be Watching becomes the ultra-punishing adventure that gaming never needed.

I've seen Gods Will Be Watching billed as a point-and-click adventure, but that's a poor description. It certainly has the veneer of an adventure game, but it's more of a turn-based strategic sim. In each round the player can take one action that has an effect on the world, and sometimes others that have no effect. The challenge lies in realizing how each action will alter the dynamics of the system, and understanding how to guide the world toward a desired outcome—how many turns will negotiating with the guards buy me? Who can stand to provoke the torturer? Is the water I'll gain from digging worth the time I'll lose doing that? Making the wrong choices leads to failure and restarting the chapter, which will happen a lot.

This balancing act made for an interesting experience in the game's initial incarnation, recapped here as one chapter of seven. The attraction then was exploring the dynamic space of the simulation and seeing how different choices would play out. The stakes of success were appropriately low as well, which prevented failure from feeling like a bad thing and made it more of an opportunity to see the different turns the story could take.

Gods Will Be Watching feels like a very different animal in its full release, in part because its linear structure raises the stakes. Failure, especially repeated failure, is no longer just a reset of a given system, but actually a door slamming shut on the rest of the game. These heightened stakes of success turn the "oh well" moment of failure into heightened frustration that's only amplified by the extreme number of failures one is likely to experience.

This is, of course, a sensation that's artificially intensified by a looming review deadline and my habit of marathoning games. The sporadic play schedule encouraged by an episodic release model might have done Gods wonders, but even then, I think the game might founder because of its arrangement.

The first chapter of Gods Will Be Watching is one of its most difficult, featuring many moving parts and complex, obscured dynamics. The second chapter, while not much easier, has much less to keep track of and might have served as a better introduction to the unique kind of game Gods is. Unfortunately, that chapter suffers from a lack of dialogue options and an extremely repetitive structure. This is one of several segments where the dynamic space isn't interesting enough to justify the many, many restarts needed to explore it.

The game makes itself absurdly difficult as a way of forcing the player to put innocents and "friends" at risk. It loses touch with this ethos, however, when it surprises the player with a new task at the last minute, or causes them to fail in ways that couldn't possibly be anticipated.

In one chapter, for instance, I was told I needed to research a drug, and I succeeded with just a little time left. Then, out of the blue, I was told that I needed to research another, much more difficult drug. These "gotcha!" moments feel less like an effort to establish a world of tough choices, and more like developers showing off their ability to make a tough game. Of course, it is no challenge to create a game that's almost too difficult to complete; in fact, this was one of the first things game developers managed to accomplish.

A greater problem is that Gods Will Be Watching never manages to establish the stakes that would give its "hard choices" real impact. Beyond what's imparted by the game's graphical style, almost none of the characters have any personality, and do little to forge the kind of connection that would make me regret executing them in order to save some supplies. The exception is Jack, the sidekick of main character Abraham Burden, who follows him through the whole story. Having seen (and likely caused) his suffering makes him a real presence. The other characters can become depressed or frightened, but Gods does too little to convince me that this is the product of an inner life, rather than an algorithm.

I respect what Gods Will Be Watching is trying to do and its efforts to work its mechanics (including failure) and difficulty into the framework of a larger theme. The game just sets up the wrong kind of stakes. The structure and lack of narrative depth force the player to view success rather than exploration as the goal of each chapter, and the difficulty means one can only win by reverse-engineering the algorithms that create the systems. When reduced to a puzzle to be solved rather than a world to be experienced, the emotional impact of Gods Will Be Watching evaporates, leaving the sense that it wasn't interesting enough to justify the amount of work that went into making or playing it. Rating: 5 out of 10


Disclosures: This game was obtained via publisher and reviewed on a home-built Windows 7 PC equipped with an Intel i7 processor, 8 GB RAM, and a single Radeon R9 270X graphics card. Approximately 6 hours of play was devoted to single-player modes and the game was completed.

Parents: At the time of writing, this game has not been rated by the ESRB. Gods Will be Watching contains some gruesome violence, including a man getting ripped in half, and it's very likely given the difficulty that a player will witness these bad endings. I recommend playing on easy, contra the developer's indications, because even in this mode a player is likely to experience many frustrating deaths. There is a somewhat reduced chance of experiencing too many, however.

Deaf & Hard of Hearing: The dialogue is all in text and there are no audio cues, so there should be no problem.

It’s only actually like 8 days of torture, but that being said, I encourage everyone to give up on GWBW early and often. My reasons for this will be made clear when my second opinion is posted in the near future.

Deconstructeam fell into the obvious trap of thinking that challenge comes from nothing more than trial and error. That, or someone on the dev team wanted to troll players, which all the unfair “gotcha” moments lends credence to.

One of the primary reasons I love Sparky’s reviews is that he does not talk down to his audience. Great informative review and your criticism skills are ever evolving good sir.

I gave up in the middle of the second chapter. I could not force myself to do 20+ days of the same crap with slightly different graphics. The biggest problem i have with this game is the absurd amount of RNG-based mechanics. I never had the feeling i could play to win a scenario, instead i could only stretch the flow of the game so far as to lower my chances of losing. Maybe this is the point, but honestly this sort of game design just plain sucks. There is no enjoyment to be found in playing the same stuff… Read more »