LOW Repeatedly failing part of chapter 16 because an object I needed was just slightly out of view.

WTF Why does everyone in this game like chicken so much?

Around 7 PM, Sissel gets murdered in a dump, but as you might guess from the title Ghost Trick: Phantom Detective

, that's not the end of his story. As a disembodied spirit, Sissel's ghostly ability to manipulate objects and move around in time offer him the chance to save the lives of people who can lead him to the motives behind his own murder and several others. Sissel has to solve the mystery by dawn, but Ghost Trick was so meticulously made and wonderful to play I wished the adventure would just keep going once the sun came up.

That description may not square with the first glimpse of the game in action. Ghost Trick's screens look almost overstuffed, and it can at times be difficult to make sense of them, given the game's shaded pastel art. The dozens of items littering the scene at any moment matter because Sissel can only move around and save lives by possessing objects, be they crossing gates or knit wool caps. When Sissel is on the go, however, a high-contrast view makes the game a snap to navigate. When he's acting, Ghost Trick's excellent animation makes events easy to interpret.

Possessing a new object allows Sissel to use a "ghost trick" to make it move or change its behavior. He's not a movie-style poltergeist, able to suck people into a television, however. Sissel can only do simple things, like causing carts to roll around, motorized Santas to move faster, or trash can lids to open, sometimes touching off chain reactions of events like an ectoplasmic Rube Goldberg.

Using this modest repertoire to cross areas and save lives poses a decent challenge. Unfortunately, Ghost Trick doesn't allow for a ton of creativity, and solving its puzzles is more a matter of finding the unique solution the developers imagined rather than coming up with your own. Fortunately, Sissel's ability to travel back in time until four minutes before a person's death means that the player gets unlimited attempts. 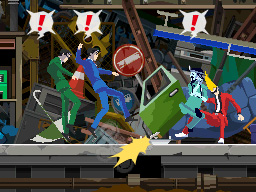 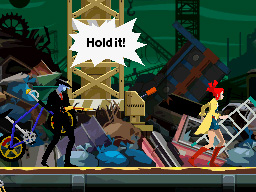 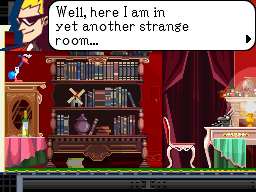 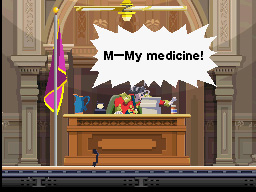 Despite their limitations, the puzzles are mostly entertaining and clever, and they become all the more interesting because Ghost Trick does an excellent job of investing the player in fully-realized characters. In part this is due to the absolutely magnificent writing (supported by a stellar localization effort). Unlike the inexplicably celebrated 999, Ghost Trick never bogs down—every bit of dialogue moves the story along, or provides an insight into the cast, and often both. Importantly, this almost never involves description; the characters reveal themselves with each line, so that even the ones who have almost no screen time express a recognizable personality. It's a mark of the quality of the writing that even gaming's most exhausted trope, amnesia, actually becomes interesting and lays the groundwork for a great twist.

The other way Ghost Trick creates its characters is through splendid animation work. Its cast members don't just look different from one another, they move differently, often in entertainingly exaggerated ways. A detective dances his way through the game; a soused writer of saucy novels offers a toast after every line; a government minister performs the most outrageous "heart attack" routine since Redd Foxx. These individual moves help to show off the characters in ways that the writing alone couldn't—no words could tell us as much about Missile the Pomeranian as the way he throws himself against a door in an early chapter, although his great lines do come close. Even the recycled animations (the chicken-eating, for instance) emphasize the relationships between the characters.

The additional benefit of these exaggerated motions is that they keep the action (and emotions) clear despite the soft-edged graphics and limited number of expression shots. This is characteristic of Ghost Trick's construction: every potential weakness is transformed into a strength through clever design, sharp writing, and intelligent artistic decisions.

Ghost Trick is a masterpiece, made by developers who thoroughly understand the medium they're working in and the hardware they're working with. Their expertise shows in the mechanics, the pacing, and the unequaled character work, both in writing and animation. Ghost Trick's qualities go beyond just technical proficiency, however. This is a game where characters die constantly, yet every scene thrums with a barely restrained exuberance for the way living things and their creations move. That delight in motion bears Ghost Trick up through its darkest, most stressful moments, so that it's a joy to experience from start to finish. The skillful production makes the game fun to play, but the wonderful personality it consistently displays makes Ghost Trick: Phantom Detective


Disclosures: This game was obtained via retail store and reviewed on the DS. Approximately 9 hours of play was devoted to single-player modes (completed once).

Parents: According to the ESRB, this game contains mild language and mild violence. Characters, including cute animals and children, die at several points during the game, but this is never presented in a gory way. The rating is probably an overestimate.

Deaf & Hard of Hearing: Absolutely no auditory information is needed to play the game. The buttons and stylus are never needed simultaneously, though it's easier to succeed at some of the timing if you use both. Single-handed play is possible.

Great review man! There isn’t enough talk about how brilliant this game is.

Heard nothing but good things about this game, and would put it in the camp of games that make me wish I had a DS. It’s hard to know if you’re enthusiasm is well founded though Sparky, after you were overly-enthusiastic about both AC: Brotherhood and BioShock 2, therefore it’s hard to tell if this game is actually a 9.5, or an 8. This is what happens when you overrate undeserving titles; scores become blurred and their actual intent is lost. For example, I hate that Shogun 2 is currently sat 90 on Metacritic since Dead Space 2 is also… Read more »