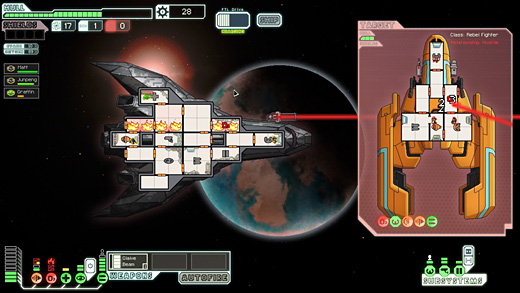 HIGH Reaching the Last Stand with a fully-upgraded, fully-staffed ship.

LOW Getting destroyed by already-fired weapons after accepting a lucrative surrender.

WTF I am pretty sure the whole thing with the Zoltan emissary was in a Star Trek episode once.

After about ten games of FTL: Faster Than Light I stopped playing to the end. I nurse each little ship along its perilous journey through unfriendly space, right up until I reach the Federation fleet. There's still a whole sector left to play, but I quit, go back to the hangar, and start over.

This behavior might seem crazy. FTL is an absurdly, cruelly difficult game. It gives the player a weak ship with a skeleton crew, then tells him to jump star to star in seven sectors of hostile space, never knowing whether the next system will hold a friendly merchant or a flaring star that will set his ship ablaze while a pirate bombards it with missiles. Oh, and this is a roguelike, so when that ship is gone, it's gone forever.

Scrap taken from defeated ships or given by helpful friendlies can be used to upgrade the ship or buy supplies and repairs for merchants, but there's no time to dawdle in each sector gathering resources. A vast armada of Rebels is searching for the ship, and once they have a sector under their thumb, each jump brings nothing but unavoidable, unproductive combat.

It isn't always possible to get through. FTL doesn't play fair, and its deaths don't always offer a useful lesson, which makes it easier to miss the ones that do. It takes only a few battles to realize how to prioritize targets and which weapons to use against them, but it can take several half-hour games and a fair bit of experimenting to realize how important it is to upgrade the doors. 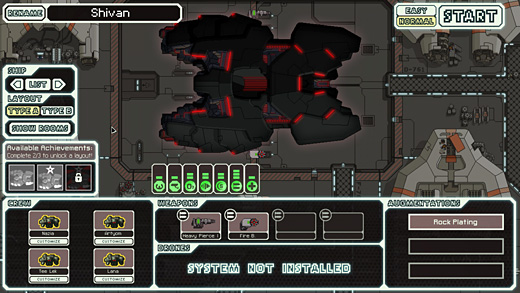 When each sector of progress is so hard-won, why abandon the game on the cusp of victory?

The sad truth is that FTL completely falls apart in the final sector. Now, instead of trying to elude the Rebel fleet, the player's small ship is sent to confront and destroy their flagship. That this becomes the mission even though the player has hooked up with a fleet of his own puts a pointless and absurd strain on what little fiction the game provides.

Yet, by allowing the player to confront and defeat the Rebels, it also diminishes the antagonists that imparted such a tense atmosphere to the earlier sector. Once an indefeasible peril to be avoided at all costs, the Rebels now must be sought out, replacing the game's measured, tactical aggression with all-out war.

This confrontation also shrinks the available spectrum of play. It's possible, even fun, to traverse FTL's galaxy in a ship built for evasion and quick escapes, but there's no reason to ever explore this and similar alternatives, because that build simply isn't viable against the game's final boss.

Worse, that boss violates the principles that the game teaches in every other combat encounter. Unlike every other ship, "destroying" the flagship merely starts a new phase of the battle. The later phases also include one-off tricks such as drones that operate when the ship's drone room has been destroyed, or boarders who teleport in even though the flagship has no more crew to spare. Approaching the final boss with the same tactical mindset that the rest of the game instills is likely to lead to defeat.

FTL: Faster Than Light's terminal turn towards space-opera bombast dramatically undercuts its story, its gameplay, and its atmosphere. That's a shame because, despite the game's fiendish difficulty, its core gameplay is incredibly compelling. For most of its length, FTL is good, bordering on great, but the end is so poor I'd rather quit than win the game. Rating: 7.5 out of 10.


Disclosures: This game was obtained via Steam purchase and reviewed on a Windows 7 PC equipped with an untweaked i7 processor, 8 GB RAM, and a single Radeon 6800-HD series graphic card. Approximately 10 hours of play was devoted to single-player mode.

Parents: This game has not been rated by the ESRB. Although FTL includes plenty of violence and death, it is presented without gore or viscera. This game is probably safe for all ages, although the significant frustration involved in its core gameplay may not be appropriate for your particular child.

Deaf & Hard of Hearing: There are no essential sound cues or dialogue, though you will miss out on a sweet soundtrack.

“I don’t like this red car because it isn’t blue.” A common flaw of criticism, but one endemic to Gamecritics reviews, and this review in particular. Rather than examine the game and critique it on its own merits — grading the experience it chooses to deliver — the critic either docks the game for failing to provide something it never sought to provide, or providing an experience the critic did not want. This is a score-based roguelike set aboard a starship. The object is to obtain the highest score possible. It is not intended to be an open-ended RPG, although… Read more »

The other thing I think the game could use is a free-roaming mode. The excitement of being pursued by rebels is all well and good, but sometimes you just want to explore the galaxy until you’re out of fuel or you get blown up.

Check out the “Infinite Space” mod. Its exactly what you’re looking for.

I’ve beaten the game with most of the ships now (can’d find Rockem, Slug, or the mystery craft), and you’re right about how frustrating the boss is. Oh, so you don’t have 4 shields, level 2 defense drones, and a 4-man boarding crew? Then why did you bother playing? Just a terrible ending to a great game.

“I don’t like this blue car because it isn’t red.”

A common flaw of criticism, but one endemic to anonymous posters, and this poster in particular.

Rather than examine the review and critique it on its own merits — grading the review the author chooses to deliver — the anonymous poster either docks the review for failing to provide something it never sought to provide, or providing a review the poster did not want.