You Talk too Much 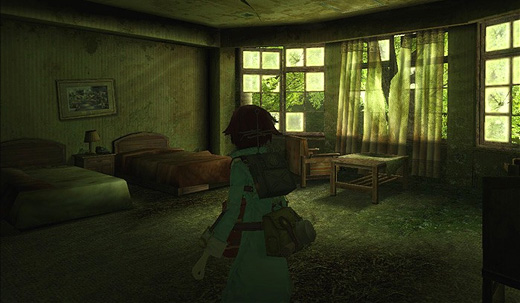 HIGH The desolate, yet familiar environments, although they're repeated.

LOW The constant tedium of the Inventory Tetris.

WTF "Friends give each other kisses, right? I read that somewhere."

The Apocalypse usually arrives with a bang and a flash in video games, a natural consequence of the combat motif that dominates their interactivity. In the radioactive haze of nuclear annihilation, or the privation that accompanies a massive natural disaster, we can find easy justification for the appearance of monsters and monstrous men. But we can instead imagine a quiet apocalypse, in which man disappears without violent incident, as if the whole species passed in its sleep. Our buildings and monuments would still stand. It would even take some time for the noisy machinery of our society to grind to a halt, so the first sign of our passing would be that there was no creature on earth that could speak. Fragile Dreams is about such a silent ending, and the value of what will be lost in it.

It's impossible to discuss what I liked about Fragile Dreams and why it didn't work without revealing some of the game's secrets, so spoilers will follow.

The event that destroyed almost all of humanity in Fragile Dreams resulted from an effort to abolish speech. The "Glass Cage" designed by the scientist Shin was supposed to give humans the power to sense each others' emotions, but instead sent nearly everyone into a sleep from which they did not wake. The game's protagonist, Seto, was an infant then, and after the death of his caretaker he ventures into the ruins humanity left behind. Some of these, like the cavernous storm sewer he explores, are everyday monuments, accentuating the absence of man with their vast emptiness. Others, like the train station and the mall, are ordinary spaces made mournful by silence.

Early in his journey, Seto encounters a mysterious girl named Ren, and spends the rest of the game pursuing her. He is helped and hindered on his way by a diverse group of characters, ultimately befriending almost all of them. Only Ren is human, however; the others are ghosts, or artificial intelligences. The first of these companions, Personal Frame, is little more than a backpack with a speaker and an antenna sticking out of it. She accompanies Seto through the early parts of his adventure, helping him through his awkward attempts to fight off the game's unfriendly ghosts. PF is living on borrowed time, however, and when her battery dies Seto tearfully buries her. His emotional attachment to a talking box is created and deepened through speech.

Seto's longing for human contact is in large part a desire to converse. When his dedication to the search is challenged by the ghostly Sai, Seto emphasizes that he wants to be with Ren, even if she hates him, so that she can respond to what he says. When he discovers the truth about his friend Crow, Seto makes it clear that humanity, in the biological sense, is not something he cares about. PF may have a flat voice and an obsession with dubiously-derived statistics, but she converses with Seto. For him that is enough to create a relationship, hence his joy when he hears voices from the radio. What separates Seto's friends from the sad little ghosts that populate most of the world is not their biology or even their friendliness, but rather their ability (and desire) to talk with him. Speech is at the core of all the game's emotional relationships. 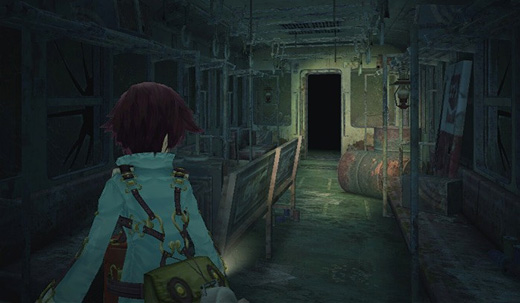 Fragile Dreams universalizes this idea when it reveals the cause of the Glass Cage disaster. Shin apparently had used the technology on himself initially and discovered that the friendly words of those around him masked their "jealousy and contempt." As is typical for a video game villain, he decided that since nobody loved him, the only thing to do was destroy mankind. As it turns out, Sai, who was being used to power Glass Cage, actually did love him. He was unable to sense this because, as Sai herself explains, "when it comes to the important things… you have to put them into words."

This is perhaps a worthy sentiment, but it's not one particularly well-adapted to America. The culture of Japan is sufficiently reserved that vocal expressions of love might realistically go without utterance for an entire lifetime. America, by contrast, is orally expulsive to the point of madness. Our problem isn't that we never say what we feel, it's that we never shut up about how we feel. Consequently, we value demonstration over vocalization: actions speak louder than words.

Cultural questions aside, Fragile Dreams has an unfortunate tendency to work against this theme. While the overall plot values speech, the side-stories collected in the form of various "memory items" tend to emphasize the inadequacy or needlessness of speech. The longest of these stories, involving nine different items, hinges on the unspoken feelings of its subjects, and the imperfection of the only manner of speech its protagonist possesses. A four-part story collected earlier describes a situation in which ill-spoken words ruin a relationship. These memories and others like them are arguing for Shin's point of view.

Moreover, the script of the game doesn't treat the characters' conversations as something to be valued. Since I do not speak Japanese I cannot attest to the quality of the dialogue as it was originally written. If the script was a work of poetry to rival Bashō, though, the translation did it no justice. This was a game that called for a free and artistic translation, one that put a higher priority on producing poetic and powerful dialogue than on preserving the literal meaning of each line.

Instead we have conversations that are prosaic and awkward, not only when it is appropriate (Seto spluttering after his kiss) but also at moments of critical emotion. Ideas and even particular lines are repeated, sometimes within the space of a few sentences, and most of those ideas aren't explored with any particular competence. This tendency pervades every aspect of the game; as Brad mentioned in his review, Fragile Dreams also has a tendency to revisit areas without engaging any new perspective on them. As much dialogue as the game has, a startlingly small amount of it is at all interesting, either on its own merits or for what it conveys. The speech that actually occurs in the game is almost uniformly disappointing.

Fragile Dreams convincingly depicts a world that has begun to crumble after most of mankind quietly passed away. In the silence of the surviving world, the last few humans desperately long for the sound of another person's voice. Seto's relationships and reactions make a compelling case that speech is an essential part of human nature. In contrast, the creators of the Glass Cage believed that humanity's problems existed because speech was a deficient way to convey emotions and ideas. The reason Fragile Dreams fails is that it does more to substantiate those claims than to refute them. Rating: 6.5 out of 10.

Disclosures: This game was obtained via retail store and reviewed on the Wii. The game was completed once.