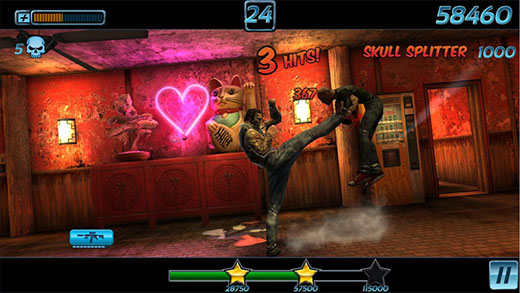 HIGH Perfectly dodging two samurai and taking them both down, then nailing a biker who tried to sneak in an attack while I was busy.

LOW Just as I cleared a difficult floor with a Perfect, the game crashed.

WTF The samurai helmets seem like they're pushing the themed-gang motif a little too far.

Fightback feels like a reaction against some of the better trends in gaming. The vibrant indie scene has been producing games that fuse modern and experimental concepts with minimalist and retro graphics. Here, as a response, we have a free-to-play brawler from a well-regarded AAA house with modern, Unity-powered 3D graphics and a completely retro concept. Fightback looks great and plays well, but feels a bit empty and disappointing nonetheless.

Fightback is a non-scrolling 2-D brawler in which the hero, Jack, moves from screen to screen and up to six baddies attack him from either side. The controls are simple – taps to punch or use melee weapons (dropped by some enemies), directional swipes to dodge, jump, or kick. Many enemies can only be hit with a specific kind of attack or a specific timing, but it never gets more complicated than a correctly-timed dodge followed by a specific kick angle. In a pinch, Jack can also pull out a gun and blow away the gang members he's fighting. Occasionally the game mistook an attempted dodge for a punch, but in general the controls worked quite well and made for some striking combos when the timing lined up.

One limitation of Fightback's system is that Jack has no real mobility. Certain kicks will shuffle him slowly in one direction or another, but in general he has to rely on enemies attacking him in order to reach them. The gun gives a way out of this, but it's slow to reload. This can be an issue, because some levels consist of floors that Jack must clear before a timer runs out. Waiting for enemies to attack while time trickles away is the game's main irritation (aside from its tendency to crash when two attacks land simultaneously) and the only remedy is to attack efficiently enough, or upgrade Jack enough, so that every time an enemy gets within striking distance, he'll go down.

Upgrading Jack costs cash (granted at the end of every floor) and occasionally gold bars that are provided as Jack completes towers or levels up. Certain weapons and upgrades also are unlocked by the stars that Jack earns for reaching a certain score, avoiding damage, or finishing early. The game comes with eight towers that have up to 25 levels, as well as a "streets" zone where Jack can fight for as many screens as the player can last.

The concept that Jack is clearing the streets of gangster trash is of a piece with the game's '80s vibe. Fightback's limp, worthless story is ripped straight from that decade's arcades—an evil man has kidnapped Jack's sister; is Jack a bad enough dude to etc. etc.

Even if someone found this story remotely interesting, it's not paid off by a boss fight against the main bad guy (perhaps this will happen in the area marked "coming soon"?) so it's a bore all around. The big bad has arranged for gangs to stand in Jack's way, so he's got to beat them to death in order to save his beloved sibling and win back the heart of the big-haired doctor who restores his stamina for a little gold.

This forms the basis of the free-to-play implementation, which isn't particularly annoying. Jack has six blocks of stamina that take 6 minutes to regenerate. Entering any level removes one block of stamina, but beating levels and gaining upgrades takes up enough time that at least one stamina block will regenerate before all of them have been used up. Unless the player is really dedicated to the idea of beating dozens of levels in a single sitting, the stamina system doesn't really get in the way.

Although the player can obtain gold by leveling up, in-app purchases are the only efficient way to obtain it. This hardly matters because the player will easily obtain all the gold and cash needed to finish the game for free with even a basic level of skill, and the special upgrades obtainable only with gold are too expensive and dull to bother purchasing. In fact, this speaks to a fundamental problem with the game's economy, which is that most upgrades are either absolutely necessary or totally worthless.

Before each level, Jack can purchase boosts that cause him to do more damage or have more life, but until the last tower or so the player is better off saving up for an upgrade instead. Jack can buy expensive tattoos that allow him to add up to three additional special boosts, but only one of the tattoo boosts is remotely useful, so even dealing with this system is a waste of time.

It may seem odd to complain that a game's in-app purchases are superfluous or irrelevant, but it points to a larger problem with Fightback in that it's really just not interesting. The artwork is quite good and the controls are smooth, but nothing about it ever made me feel compelled to purchase more stamina so I could fight through one more floor. Since stamina purchases were unnecessary and the optional buys weren't intriguing, I had no pull to pay for the game even though I liked it. Fightback is as straightforward as its name, and equally dull. Rating: 5 out of 10


Disclosures: This game was obtained via retail download and reviewed on an iPad with Retina display. Approximately 6 hours of play was devoted to single-player modes (completed once).

Parents: As of press time this game has not been rated by the ESRB. Fightback contains blood, suggestive themes, and violence. The enemies ragdoll in rather grotesque ways, but there's no overt gore. Tweens and up can probably play this with no problem, though it might bore them.

Deaf & Hard of Hearing: There's no real spoken dialogue-everything is in text. I didn't notice the game being any more difficult to play when I turned the sound off.