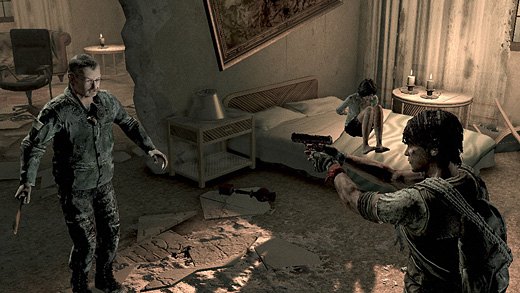 is a post-apocalyptic platforming and combat game that does a few things right and many things very poorly. My second opinion covers many of the mechanical and technical issues, but I didn't have enough space to address an additional, more subtle point about the story. I Am Alive clearly wants to be a serious, adult take on post-apocalyptic survival, and in some respects it is. Unfortunately, the game's treatment of women, among other things, seems to devolve back to the attitudes of a teenaged boy. In I Am Alive, women are helpless objects to be fought over and protected by men.

Part of the problem lies in the traditional "damsel in distress" architecture of the game. The unnamed protagonist starts off searching for his wife and daughter, then finds another little girl whom he must treat for a fever and then deliver to safety, then must save the girl's mother, then must save the girl again and get her and the mother to a safe haven. Almost all of the goals in the game are oriented directly or indirectly towards "saving" women. In isolation, this would be nothing remarkable, but it forms the nucleus of a more troubling pattern.

I Am Alive denies female characters agency throughout the game world. Within the main quest, a paraplegic man provides the protagonist weapons and frequent guidance, but the principal woman character gives no material aid. Very few characters outside this quest show any ability to help themselves or others, but in these rare cases—a person offering supplies in a wrecked ship, the captain who ultimately saves the woman and child—the roles are held by men. Women have no capacity to help the protagonist or themselves.

Negative NPCs are even more slanted. Many characters will threaten the protagonist, but only attack him if he gets too close. Only a few of these threatening figures are women, and all of the more aggressive thugs are men. It may seem strange to complain about that, but when the social contract breaks down, a person's ability to use force becomes an essential part of life. In this context, excluding women from the enemy list effectively makes them lesser people. Women can't take what they need, as men can.

I Am Alive goes even further than this in a segment where the protagonist rescues a woman from a hotel occupied by thugs. As it turns out, many women are kept in the hotel against their will, and the men running the place obviously intend to sexually assault their captives. None of the women seem able or willing to fight back, and once the protagonist rescues his target, she will not help him in combat, even though the men he's already killed were armed with machetes that she could use. In this part of the game, women are exclusively helpless victims who rely on the male protagonist for rescue and protection from other men.

Throughout, I Am Alive demonstrates that the women of its post-apocalyptic world are dependent on men for protection and survival. Implicitly, this argues that the equality and self-determination of women is an artifact of modern society, a nicety that came crashing down along with all the buildings. In the state of nature, the game seems to be saying, women must live in fear and need of men.

Even the purest Hobbesian ought to have some trouble with this proposition, not only because it undermines a principle of equality, but also because it ignores the fact that oppression thrives on, and usually requires, institutions. The subordinate status of women for much of Western history was not some tenet carried forth in pure form from deepest antiquity, it was a consequence of social, religious, and economic institutions designed to deny women independence and self-determination. The proposition that women would end up in a state of dependence so shortly after disaster ignores this history entirely.

Here I've been rather critical of I Am Alive

, but it's just a particularly striking example of an endemic problem. As I mentioned, the "damsel in distress" structure afflicts many games, due to unsupportable expectations about the audience and the limited creativity of both developers and the executives who fund them. Many commentators rightly get up in arms about the over-sexualized portrayal of women in games. The structural choices that depict women as helpless and needy, however, are an equal and in some ways a more insidious danger, because they inform and develop misogynist attitudes while making the player feel entirely like a hero.

Thank you for raising this issue so eloquently. I’m often disturbed by the portrayals of women not only in the realm of video games, but within the “post-apocalyptic” setting, be it in literature, film, or games. Too often, the post-apocalyptic world is viewed as the ultimate man’s world, and I feel that this may be a reaction against the growing awareness of oppression in our own world. As racism, sexism, homophobia et al are becoming targets of social criticism, it seems that those of the privileged classes–white, male, straight, cis–will occasionally lash back, and media like this is often the… Read more »

I hate to be that guy, but I disagree with the thrust of this article. While ‘the game denies female characters agency’ is technically true, I don’t feel that it is a firm foundation on which to base the rest of your argument. From what I remember, very few of the characters in the game have any real agency. Firstly, as regards characterisation, all the characters in the game are portrayed with the briefest of sketches, and it would *possibly* be a mistake to extrapolate any hypothesis from any individual’s existence or actions. I think the writing was decent, and… Read more »