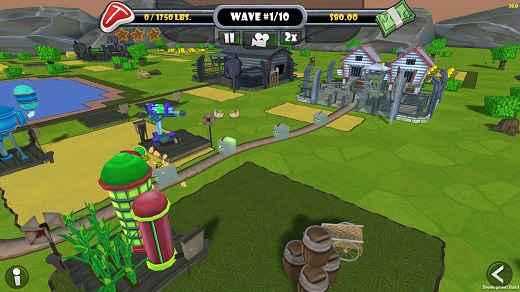 HIGH Happening on the right design and the right timing of early launches to get every animal to the goal in a huge level.

LOW Being so short of cash that I had to launch every wave early… before the first wave even reached the goal point.

WTF The ‘Mr. Creosote' bit in the final level.

The food systems of the United States have some problems. Not only is California facing the drought of the millennium, imperiling much of our produce, but it's increasingly clear that meat production is unsustainable. Meat-making causes maltreatment of animals, sucks away valuable feedstock, produces food that tends to have negative effects on health, and is a nexus of inappropriate antibiotic use that threatens to end to medicine as we know it.

On the other hand, bacon is very delicious.

A game may be an interesting way to explore these issues, but Fat Chicken, despite its apparent ambitions, is not that game.

Fat Chicken bills itself as a reverse tower defense game, by which it means that the player's goal is to keep creeps (chickens, pigs, and cows) alive from their launching spots (barns) to the goal point (a slaughterhouse). To do this the player can build towers at certain fixed points, either in a paused state before the waves of creeps start coming, or in real time while the waves are in progress.

The animals have fundamental needs such as food and water that must be met, and in certain circumstances they will also need antibiotics. Other towers can shoot the animals with hormones so they grow larger or mutate them to have more meat. Aside from just keeping the animals alive, the player has to fend off cow-abducting UFOs by using gun towers. Protestors may also interfere by shutting down towers, which can be counteracted by hiring security guards.

Winning a level by getting enough meat to the finish line nets the player stars and gold nuggets for purchasing upgrades and one-off items. In-level tower building uses something called murderbux. The player receives a small pool of these at the start of the level and subsequently must earn them, either by getting animals to the goal point or by launching waves early.

The problem here is that the design doesn't really account for its own differences from standard tower defense. In many tower defense games that allow for mid-wave construction, enemies give rewards for dying anywhere on the path, so it's easy to earn cash from the very start of a wave. In Fat Chicken, however, the wave of creeps must traverse the entire path before the player earns one cent. As a result, the player is absolutely committed to her initial tower placement. Even if every single wave is launched early for a little extra money (as this design essentially compels the player to do) it doesn't compensate for the early-round cash shortage.

Fat Chicken also feels like it lacks tower diversity. The library of six towers isn't that far off from other popular entries in the genre, but again this is an area where the unique mechanics of Fat Chicken work against it.

In standard tower defense games, all types of towers affect a single parameter (HP) for the creeps and therefore are distinguished by strategic characteristics like fire rate, damage per shot, and area of effect. In contrast, almost every tower in Fat Chicken feeds into a different parameter. Food towers satiate hunger, water towers quench thirst, and antibiotics cure illness, and all of these are different gauges on each animal. This one-to-one relationship produces a sense of boredom as there is no strategic variety to explore in any given parameter.

The need to satisfy all the different gauges and the serious shortage of early-round money dramatically constrains the tower arrangement at the start of a level. Because there's no strategic variety for satisfying any particular gauge, the rest of the level falls almost automatically out of the starting layout. As a result, the play on any given level is about satisfying a narrow optimum of early strategy, and because of this, Fat Chicken feels very much like a puzzle game.

I could defend much of this if the design sold the game's political angle, but it doesn't. By setting its assembly-line motif outdoors, Fat Chicken actually undersells the horrific aspects of factory farming. It also takes such an optimistic line on the effectiveness of organic and free-range meat production that it doesn't bother to argue for it with any kind of gameplay. The addition of fanciful elements like UFOs and the genetic modification tower adds some needed diversity to the tower types, but they make the game seem less political and more of a light-hearted satire in the vein of South Park's triangulations.

Fat Chicken doesn't really succeed either as a reverse tower-defense game or as a political statement. By clinging too tightly to a standard in-level economy that doesn't play well with its twist on the genre, Fat Chicken ends up with play that's overly constrained. Similarly, the relegation of political content to between-level vignettes and the choice of tower defense as a motif blunts its efforts at social commentary. The end product feels, dare I say, undercooked. Rating: 6 out of 10


Disclosures: This game was obtained via publisher and reviewed on a home-built Windows 7 PC equipped with an Intel i7 processor, 8 GB RAM, and a single Radeon R9 270X graphics card. Approximately 5 hours of play was devoted to single-player mode and the game was completed.

Parents: As of press time this game has not been rated by the ESRB. Although the game deals with the raising of animals for slaughter, the graphics are not realistic and the worst you'll see on screen is cartoon violence like animals exploding into hams. I would rate this E10.

Deaf & Hard of Hearing: There are no essential sound cues but some of the visual cues may be too subtle without sound to help.

I must disagree with you on one major point – bacon is overrated.

Credit where credit’s due, Fat Chicken has an impressive concept that could get people thinking, but it’s evident that the developers struggled when they tried to translate their message into game mechanics.