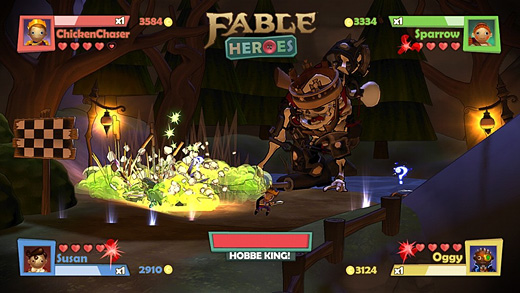 LOW Losing track of my character over and over.

seemed like a good idea. I've always felt the Fable games were at their best when they laid off their ponderous, self-important stories and played for laughs, so I welcomed the concept of a lighthearted, beat 'em up romp. Something went very wrong on the way from concept to game, however, and the result is an incoherent, poorly designed mess.

The trouble starts with the look. Characters from across the Fable series appear in Fable Heroes as puppets, but nothing else shares this motif. The cel-shaded landscape doesn't look like a set, and the enemies don't look like puppets themselves. For character progression, the puppets wander around a board game, but nothing on the board looks puppet-like or homemade, nor indeed very much like the rest of Fable Heroes. Each element looks fine individually, but they don't seem to belong to any coherent aesthetic.

Perhaps a story of some kind could have stitched all the disparate elements together, but Fable Heroes hasn't got a plot, or even dialogue. Instead, it presents a tour of locales that are Albion's greatest hits. True to the main games, these areas look expansive, but only provide a narrow scope for gameplay. This is just as well, as the characters move very sluggishly without a speed upgrade.

Each area serves up plenty of the series' traditional enemies that must be dispatched in minimalist beat 'em up style. The puppet heroes can perform a normal attack, a charged "flourish" strike, and an area blast. However, the balance between these is completely off. The extra time needed to fire off a flourish adds a degree of danger that isn't compensated by the additional damage, and the area attack drains health. As a result, the gameplay consists almost entirely of spamming the normal attack.

Even if the combat had some depth, it would be difficult to explore that, because awkward camera positions, muddy visuals, and hordes of enemies often conspire to make it difficult to parse the screen, or even locate one's character.

For a little variety, each stage ends with a choice between a boss and a mini-game of some kind. The bosses all play out more or less the same, sponging up enormous amounts of damage and unleashing dozens of minions. Even then, they're better than the boring, ill-handled mini-games.

The reward for success in every phase is coins, which are dropped by all enemies and awarded for mini-game performance. Of course, the coins enemies drop can be grabbed by any character, making freeloading a viable strategy. Gathering coins allows players to roll a die and move characters around a game board where they can buy upgrades. This adds nothing to the character improvement process other than the frustration of being unable to purchase an upgrade the character can afford.

Almost nothing in Fable Heroes

seems well-designed or carefully thought out. Its incoherent visual design is wrapped around a poorly-tuned beat 'em up with an obfuscated progression system, spiced with lousy mini-games. The total absence of story or even silly dialogue is likely to put off fans of the flagship Fable games, and without that draw it's difficult to see why anyone would bother. One or two interesting ideas poke through, but Fable Heroes is a failure. Rating: 3.0 out of 10.


Disclosures: This game was obtained via publisher and reviewed on the Xbox 360. Approximately 5 hours of play was devoted to single-player modes (completed 2 times) and 2 hours of play in multiplayer modes.

Parents: According to the ESRB, this game contains fantasy violence. The game doesn't have any really objectionable content that I could see, although some might not be entertained by all the chicken kicking.

Deaf & Hard of Hearing: There's no dialogue and no important sound cues.