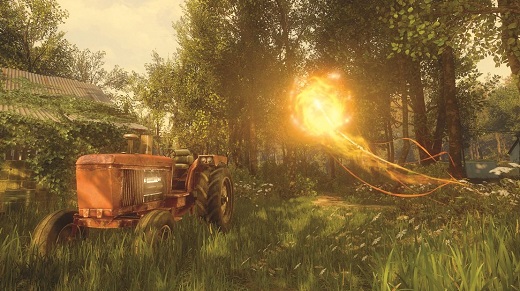 HIGH When I descended towards the farm with the tree and there was that song.

LOW Listening to the writers flail away at pretend science.

WTF These pubs all have the exact same specials?

I respect the confidence of developers that make "walking simulators", because the requirement for successful minimalism is absolute excellence. A game with lots of interactive bits and bobs can rely on them to distract players from shortcomings in story and setting, but in projects that have been stripped down to a very small set of verbs, it's essential that every element works individually, and as part of the whole. Limiting the player's abilities lays bare the shortcomings of world and narrative design, as Everybody's Gone to the Rapture makes clear.

As one might guess from its quaint countryside setting, Rapture belongs to the genre of "village secrets" stories, where the petty hatreds and moral misdeeds of small-town dwellers form a prurient backdrop that explodes in response to some crisis. The emergency in this case is precipitated by two astronomers, Steven and Kate. They turn their telescopes to a particular spot in the night sky, opening the door for a "Pattern" that causes nosebleeds and disappearances, and is also apparently fond of swirling paint about. Both the science and the way the astronomers talk about their science are absolute gibberish, but despite the fact that Kate jabbers at length about it through audio broadcasts, the science of this fiction isn't really the point.

All this business with the Pattern occurs and everybody perishes at some point before the player's avatar shows up on the scene. I have to use the awkward term ‘avatar' because Rapture doesn't make it clear who or what the player's viewpoint represents. Evidently it has a physical form similar to humans since it must open doors and climb ladders as it plods about the valley, but it's not clear how this could be the case given the premise.

Since everyone has already snuffed it when Rapture starts, there's nothing for the player to do but stroll leisurely through the countryside looking at all the places bodies should be—all of the corpses have vanished, whether or not the Pattern directly caused them to pop their clogs. This journey skillfully employs a beautiful choral score by Jessica Curry to tremendous emotional effect as the player runs into various forms of audio logs that explain the past.

Yes, Rapture is awash with recorded conversations. The aforementioned broadcasts from Kate provide some of them, as do ringing telephones throughout the valley that serve primarily to communicate the sequence of events in the village.

The remainder of the logs take the form of conversations (or occasionally monologues) between glowing silhouettes of people. No apparent logic guides what the avatar "sees" in these scenes beyond "what does the player need to understand the story?" Sometimes, the player witnesses conversations that explain the relationships in the game, even if they took place long before the pattern arrived. In other spots, Rapture displays vignettes that are completely utilitarian or emotionally irrelevant to the characters involved, so long as they shed light on the plot.

I'm aware that a lot of the above sounds dismissive, and in a way it is. I didn't care for this story and I didn't care for these people. Village stories like this one are born out of a combined fondness/revulsion for small-town lives and mores that I simply don't share. The personal conflicts here aren't unique enough to be interesting in their own right, and despite a few scenes of effective pathos, they don't interact fruitfully with Rapture's apocalyptic storyline. This might be tolerable if the game had a story for the player to participate in, but Rapture consists entirely of aftermath. The game lacks even something as modest as the sense of pilgrimage and destination that was the through-line for Dear Esther.

In a larger sense, though, I just don't buy what Rapture is selling. The game wants to emphasize spirituality, and the importance of connections between souls. That's everywhere in the story; even in the science-ish bits Kate keeps talking about. The pain and despair the characters experience are due to their inability to see beyond the physical implications of the Pattern's activities. Focused on the material world, they don't realize that a higher destination awaits them when they join the choir invisible.

In this light, The Chinese Room's choice to direct all their graphical energies towards depicting the landscape feels misguided. Rapture's world is beautifully and painstakingly rendered to be as visually immersive as it can possibly be, and the game even adopts a sluggish walking speed to force the player to soak it in. Thematically, though, this gloriously-depicted environment is meaningless. It's the people and their connections that matter, but Rapture shows them only as barely distinguishable shining blobs, the subtleties of their emotions lost in the yellow glow of silhouettes.

Everybody's Gone to the Rapture's photorealistic graphics obsess over the material and miss the spiritual, as if its creators couldn't embrace their own themes. This conflict leaves the game in an uncomfortable place. The beauty of its locations can't be denied, but it seems to be at odds with the game's core. The backstory didn't grab me, and the avatar's journey lacks internal logic or a narrative thrust of its own. Rapture coasts a long way on the strength of its visuals and score, but in a minimalistic game, production values can't mask the weak storytelling and thematic inconsistency. Rating: 4 out of 10


Disclosures: This game was obtained via retail purchase and reviewed on the PS4. Approximately 10 hours of play was devoted to single-player modes (completed 2 times).

Parents: According to the ESRB, this game contains violence, blood, suggestive themes, alcohol reference, and strong language. That strikes me as an ambitious characterization of what goes on here. Blood is definitely present, but because of the nature of the depiction one never sees violent episodes in any detail. There is no gore, and while the game deals in adult themes there's nothing salacious. The rating is too high and I would have no worries about allowing a teenager to play the game.

Deaf & Hard of Hearing: While subtitles are available for all dialogue, a great deal of the gameplay revolves around finding radios that are broadcasting an emergency message or phones that are ringing. Non-hearing players are bound to miss out on a great deal of the story. In addition, this game's emotional impact is heavily dependent on its soundtrack. In light of these facts I do not recommend this game for deaf or hard-of-hearing players.

This is the most boring game I have ever played, reviewers on various sites who waxed lyrical about this game when I was considering getting it must watch paint dry for a living before going home to tend to their animal dropping collections, this game redefines tedium.

My experience of the game was pretty much the same – a slow realisation that I was going to encounter absolutely nothing of interest. And when I did realise that, the game became utterly infuriating due to the slow pace. Seeing a branching path was akin to encountering the north face of the Eiger, because I knew I had to endure a hard slog just to assure myself that there was nothing interesting at the end of the path. It’s a pity; as mentioned, there were some moments of pathos, but these were few and far between. The story, and… Read more »