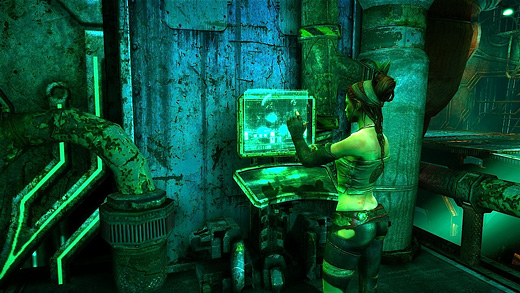 During the "Females on Female Characters" panel at PAX East 2011, Susan Arendt argued briefly in support of Tripitaka (Trip), a character from Enslaved: Odyssey to the West. This appreciation seemed bizarre to me, so the moment stuck in my mind. Enslaved was a gorgeous game with phenomenal voice acting, decently expressive gameplay, and very bad writing, of which I thought Trip was a prime example. The game apparently wants us to like and sympathize with Trip, but she struck me as a perfectly reprehensible person in general, and seemed to represent patriarchal stereotypes more than she undermined them.

We first meet Trip on a slave ship, where she kills dozens of people to save her own skin. She escapes from her prison pod without serious incident, then goes over to a control panel and, rather than opening all the other pods and freeing her fellow human beings, causes an explosion that kills some of them instantly and dooms most of the rest to a fiery death. The player, as Monkey, survives the explosion and follows Trip through the ship, during which he hears the other prisoners' pleas for help as they watch the fires approach and await their inevitable demise from immolation or impact. At several points during this sequence, Trip chooses to flee further or lock doors behind her rather than wait for Monkey or help him. Given that Monkey is a large, frightening, unfriendly stranger, her actions are justifiable, but the player is bound to Monkey's viewpoint and therefore likely to find him the more sympathetic character. In the finale of this sequence, Monkey climbs onto the outside of an escape pod that Trip is in, and she launches it anyway, an act that can fairly be described as murder unless she was aware that Monkey was the main character in a cinematic action game and therefore immortal.

After this we are treated to the scene where Trip reveals that she has put one of the (potentially fatal) slave headbands on Monkey. As a way of explaining why the player must go certain places and do certain things, this is reasonably clever. It's quite similar—and in some ways superior—to BioShock's way of explaining the limits of the player in the game world, although it's far less subtle. Enslaved also inverts conventional power dynamics, placing authority and decision-making with the female character. For a sexist person, that may well be sufficient reason to be angry at Trip and to hate this sequence. I feel compelled to note, however, that enslaving another human being for any reason is thoroughly awful, and that anyone who does it is evil even if she doesn't warm up for it by murdering dozens of people, and regardless of whether it results in an interesting inversion of patriarchal values. By which I mean, I think that a person can legitimately hate Trip for doing this without being a sexist ass.

Arendt, for her part, appreciated that Trip understood where her weaknesses lay and took steps to overcome them, which is a legitimate way of looking at this sequence. Yet, this interpretation paints Trip as scatterbrained at best. For one thing, since both Trip's home and the Pyramid are to the west of New York, she might have just waited a bit before murdering everybody on the ship, and thus crash-landed closer to home. Additionally, a coherent plan to use Monkey to get her back to her village is somewhat at odds with the multiple decisions she makes on the ship that she should reasonably believe will result in his death. 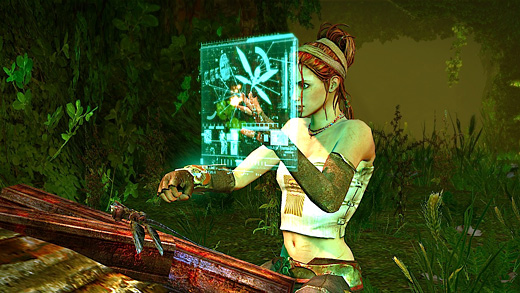 The ultimate reason Trip enslaves Monkey is so that he can ferry her to a sequence of increasingly grotesque father figures. To the game's credit, this isn't as passive as it sounds—although Trip can't physically fight the bloodthirsty robots inhabiting every corner of the game world, her technical knowledge is essential for getting through the ruins and scouting out upcoming areas. Ultimately, though, she needs Monkey's muscle to help her across the rubble, and she needs his motorcycle to transport them back to her home.

This journey ends unhappily, as the robots have already invaded the town. Trip runs into the enemy-infested village on her own, endangering herself. Of course, this also endangers Monkey, because the slave headband will kill him if she dies. Her decision to enter the town is foolish and irresponsible, and if that were all, then she would just be a lousy person. However, the foolish, irresponsible young woman who must be rescued by her man after her emotions cause her to rush into danger isn't exactly a new or progressive plot element. Monkey has merely been re-imagined as Mario, with Trip playing a Princess Peach who actively tries to get kidnapped by Bowser.

Although she had promised to release Monkey once he returned her to her home, Trip reneges when she finds her father dead, forcing Monkey to join her for an attack on Pyramid, the organization behind the robots. In order to do this, they need the help of Pigsy, a creepy friend of her father's. She enlists this fellow in her vendetta, too, an action almost certain to be fatal since he's not the main character. As it turns out, that's precisely what ends up happening: Pigsy sacrifices himself so that Trip and Monkey can break into the Pyramid.

There they find a room full of people being kept in a kind of VR haze by a man-machine hybrid. In a fit of rage, Trip kills the fellow with her bare hands, an action that is morally defensible, or at least would be if the episode made any damn sense. That issue aside, the immediate effect of her action is for the power in the Pyramid to go out, leaving hundreds of people stranded in the middle of the desert with no apparent means of escape. Perhaps she hasn't condemned everyone in the building to death, but there's no particular reason to feel hopeful.

In light of this story, it's difficult for me to see how Trip could be seen as a positive kind of female character. Although she holds the power in her relationship with Monkey, she gets in that position by doing something that's openly evil. In her use of that power she is selfish, dishonest and irresponsible, often in ways that adhere to patriarchal tropes about overly emotional women making rash decisions. I won't deny that there are some aspects to Trip's story and character that are interesting. From the opening moments of the game, however, Trip comes across as a tremendously awful person, and at no point does she really do anything to redeem herself. If she represents one of the better female characters to appear in games in recent years, the situation is more dire than anyone has acknowledged.

I think suggesting Trip’s lack of empathy for the enslaved aboard the ship at the beginning as homicidal malice is misconstruing what isn’t made clear. Is the ship full of slaves? Is Trip’s use of a computer to open a door what causes it the ship to explode? For someone who questions all of her motives during the game, why doesn’t Monkey call her on it? To me, those are relevant questions. Most of the machines that Pyramid uses seem to be in little better shape than the rest of the world we see. I don’t find it hard to… Read more »

I’ll be honest and say I never played Enslaved. It sounded like a pretty looking but flawed game that would be relegated to the discount bin where I could pick it up for a song. But I always read about the teamwork in the game and how these two disparate people were “forced” to work together. They way I heard it sounded like something closer to Logan’s Run or something. 🙂 After reading your blog it sounds like there was another angle that should have been talked about and its that Trip is both a monster and a woman that… Read more »