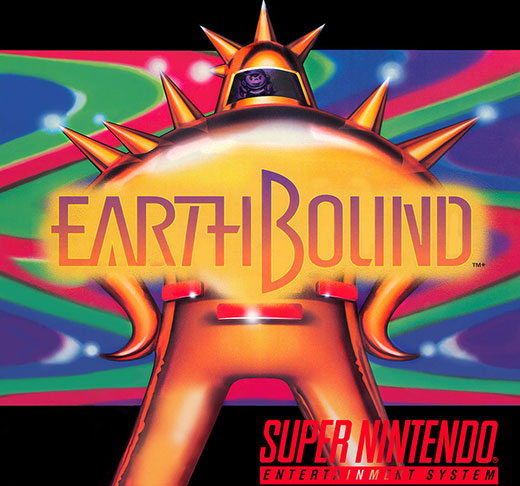 1995's EarthBound (SNES) is a widely known and beloved game, but one that sold so poorly upon release that it's probably beloved by significantly more people now than ever bought the original cartridges.

Even today it remains unique, thanks to its simultaneously mundane and bizarre modern-day setting and philosophical strangeness. More than a decade since its launch, it still inspires a vibrant fan community that has so thoroughly gone over the material that it may seem there's little else to say about it. Author Ken Baumann seems to have felt this way too, because his book rarely delves deeply into it. On the cover, "EarthBound" is in large letters and the author's name in small ones, but judging from the contents this should have been reversed.

EarthBound (the book) is the first title from Boss Fight Books—I should point out that I contributed to the project's Kickstarter—and feels somewhat like a shakedown cruise. The basic work of proofreading has obviously been done, but the book's meandering structure and strange digressions, like the inexplicable inclusion of an extended quote from a Donald Rumsfeld press conference, suggest that it has been edited with too light a touch.

Near the start of the book Baumann writes about calling his brother for the first time in a year, which is an indication where EarthBound is going. Baumann, a star of The Secret Life of the American Teenager, puts almost as much effort into relating his life story as he does into describing the game and the circumstances surrounding it.

That's not intrinsically a bad thing, but I felt a bit disappointed by EarthBound's approach. The best examples of personal games writing—e.g. Ashton Raze's recent essay on his reaction to Octodad—draw clear, specific relationships between the writer's life experience and the mechanics or themes of a game. Baumann, however, seems content to restrict his discussion of the game to reportage. He does a decent job describing what the game is, but with few exceptions he never really gets into why it is what it is. He again prefers the details of his own life.

This is a shame because when he does go deeply into a topic—the cultural context of the game's disastrous publicity campaign, for instance—he proves to be an able and engaging writer. Similarly, the passage where he relates the mechanics of the final boss fight to a crisis in his own life is quite effective.

On the whole, however, the focus is too shallow and the connections too lightly drawn. EarthBound just flops an autobiography down next to a game summary, and looks at the reader expectantly. It's a reasonably interesting life story and I liked the book's anecdotes and digressions just fine, but I rarely felt EarthBound delivered much insight into its subject or its author. Rating: 5 out of 10

Disclosures: This book was obtained as a Kickstarter backer reward.

Parents: This book contains some references to drug and alcohol use and abuse, but is suitable for all ages.