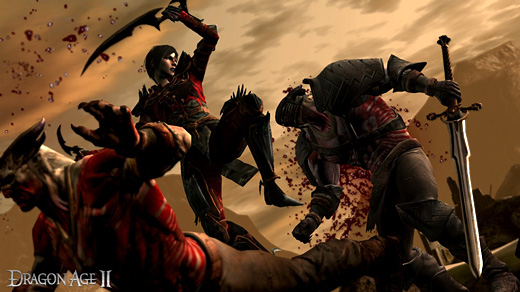 I think I should start with the reason I placed the pre-order in the first place, which is that I enjoyed Dragon Age: Origins a great deal. I didn't particularly care for the combat, which suffered from having continuous time and lousy AI. I also thought that much of what BioWare did to make the game seem gritty, especially the blood spattering, was unintentionally comical. However, I thought the game had some interesting ideas hiding behind its surface pageantry of turgid Tolkienism, and the writing for some of the characters (Shale!) was really great. So, when I heard Dragon Age II

was coming out I placed an order, and when I heard there was a demo, I downloaded it. Having thoroughly gone through the demo, however, I decided to cancel the pre-order.

That's not because I thought everything about the demo was terrible. Varric, at least, seemed like an interesting character, and I thought the overall plan of the frame story was highly effective, at least on this timescale. Introducing the character as a great hero before kicking him back to level 1 was a sharp idea, and though I didn't like Flemeth's new look, it invited interesting questions about unreliable narration (or unreliable ideation). I still hold out hope that the story and characters will be interesting. However, I could already tell that I would never be able to enjoy them, because I utterly despised everything else.

Do not take this as some snoot dismissing action-RPG combat a priori. I am, after all, a fan of the Tales series, and there are many respects in which Dragon Age II's combat is quite similar. An example from Tales is actually instructive. In the worst game of the series (Tales of Legendia) I had an encounter quite late in the game with some kind of massive worm thing, which had an absolutely tremendous number of hit points. It took poor Senel almost ten minutes to punch the thing to death, and he received a very paltry experience reward. Afterwards, my thumb ached and I wondered why I'd even bothered.

Every battle in the Dragon Age II demo was like that. As a rogue or a warrior, your job is to bang away on the A button, whittling one or two pixels at a time off the end of your opponent's life bar until one of your special abilities cools down. Then you execute it, taking almost four pixels off the life bar, and go back to wailing on the A button. For a mage, the process is quite similar, except that the ordinary whittling is slower and the specials do more damage. The whole thing was boring, pointless, and endless, especially in the second fight against the ogre. Even if the retail version has an option to let the player attack continuously instead of using a 1:1 approach, the battles promise to be death by a thousand paper cuts, a far cry from the awesome things the character is doing in the cinematics. 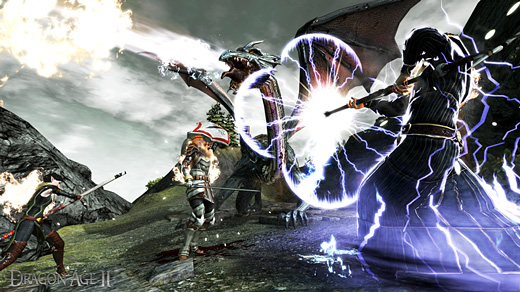 Speaking of cinematics, I have already compared Dragon Age II to one Japanese role-playing game series, and now I will mention another, because the opening level's structure and pacing took much from Final Fantasy. As the hero and his family flee from Lothering they are running down what is essentially a corridor, and we get to experience a rhythm of cutscene – battle – cutscene. While there are dialogue choices available, they have no serious impact or effect as you roll down the predetermined course. Will the whole game be like this? The level design in Origins was already constricted, so I do not have high hopes. Representative or not, to offer this as a demo after the widespread excoriation of Final Fantasy XIII seems the work of a saboteur or an idiot.

I didn't even enjoy what I was looking at. Of course, the (I admit, optional) blood spatter still looks completely silly, and made the come-on at the end of the demo seem ridiculous. The levels were worse—the first one was an eyesore in every respect, a blasted hellscape thoroughly unhinged from the reality the first game created. The second level looked a bit better, but it felt quite sterile. This was a surprise, because the cityscapes of Origins were so engagingly dirty.

The character designs were fine, if unremarkable, but the animation in combat was very strange. The motion of the character seemed extremely unnatural, as if the battle movements had been created by stringing a few poses together with low-grade kinematics. For the rogue this looked a little odd, but for the two-handed warrior it looked positively bizarre, with a giant sword swinging around as if it had the relative mass of a whiffle bat. There was no impression of heft or strength at all, which I suppose is actually in keeping with the paltry damage output.

I am likely to give Dragon Age II a go at some point, either as a rental or a purchase after the inevitable series of price drops. And I'm sure that even if I don't, EA and BioWare won't be pining for my cash. I hope I'm wrong about Dragon Age II

, that the combat is awesome, the levels are fun to explore, and the storyline is compelling. After the demo, however, I'm not going to wager $60 on that. I've played unimpressive demos before, of course, but never any that made me do such a complete 180 on a game.

FYI you can turn on auto attack, I think they over simplified combat to much, the AI seems as wonky. The only real change in the horrable skill trees is most of the characters get a specialization 2ndary class right off the bat.

All in all it will be worth mabye 20-30 once all the DLC comes out but for now its just not worth the time/effort/money.

PS:ME3 will suck. ME2/DA:0 was the end of bioware as a solid RPG maker they now make action games that may or may not be half assed.

You admit that you didn’t care for the combat of Origins. The combat of DA2 is largely the same, simply swap auto-attack for manual attack. You also complain about the linear level design. The Origin path story lines were also incredibly linear much like the beginning of Dragon Age 2. Note, both sections take place in the beginning of the game. You have several niggling issues with the graphics. The graphics and animation of DA1 were subpar by 2009 standards. the party members largely looked like animatronic puppets during dialogue sequences. DA2, by comparison, looks only slightly dated. The only… Read more »

As I said, I thought some of the characters seemed reasonably interesting and I like the idea of the frame story. That’s enough to at least give the game a shot if I can pick it up on the cheap at some point down the line. Even games I think are horrible often contain ideas I find valuable, and they’re often worth playing just for those. And hey, maybe the battle system transforms from an ugly duckling into a beautiful swan at some point. Hopefully Brad will let us know.

“I am likely to give Dragon Age II a go at some point, either as a rental or a purchase after the inevitable series of price drops. And I’m sure that even if I don’t, EA and BioWare won’t be pining for my cash. I hope I’m wrong about Dragon Age II, that the combat is awesome, the levels are fun to explore, and the storyline is compelling. After the demo, however, I’m not going to wager $60 on that. I’ve played unimpressive demos before, of course, but never any that made me do such a complete 180 on a… Read more »

Were you the only person that played the demo? Because everyone seems to be caught unaware of how much of a letdown Dragon Age 2 would be.