Time's not on your side 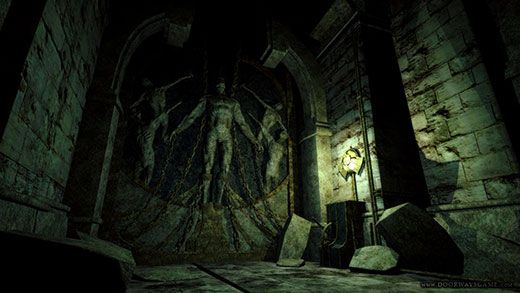 HIGH The first time seeing subject 1201 loom out of the darkness.

WTF Man, the story going on in these notes sure seems interesting. Wish I was playing it.

The first two chapters of Doorways weren't good, but the game showed notable improvement from the first chapter to the second. For reasons that aren't clear (and apparently some early access purchasers are dismayed) the game's third chapter is a separate purchase.

The good news is that this latest installment shows substantial creative and technical improvement over the previous parts, and is a meatier offering than either. The bad news is that it has many of the same issues, and adds a few new ones. Returning problems include iffy graphics (especially when the game tries to depict a living enemy), wobbly storytelling, and a continuing lack of clarity about who protagonist Thomas Foster is, what exactly he's doing, or why he sounds like he's on break from announcing for Jeopardy.

On the other hand, The Underworld looks much better than anything Doorways has shown before. The textures are crisper, the lighting is more effective and dynamic, and the game shows off a diverse set of locales that largely work together. The level design, however, feels much less organic. The Underworld consists entirely of unnatural spaces, all straight lines and right angles. This design quirk is acutely obvious in the mazelike final segment, which sports essentially blank white walls and abandons all pretense of representing some kind of functional space.

Unfortunately, the upgraded graphics have not been matched by improved storytelling. In this chapter, Foster again finds notes that relate events and ideas that don't seem to be present in the world the player experiences. This disconnect is especially true in the first segment, a sort of underground prison where Foster seems to be freaking out at literally nothing. Considering that he saw rooms full of people impaled on spikes and spears in the previous chapters, it's odd for him to shout in terror at the sight of a stained mattress. The notes seem to explain why, but the player doesn't get to see much of what Foster sees.

The part of the game world that the player can see at least works. Doorways is not a combat game, but in this third chapter Foster regularly runs into enemies that are out to kill him. All he can do in these cases is run and hide, guided along by helpful messages that appear on the walls as in Splinter Cell: Conviction. The game's efforts in this regard are weak, thanks to the lack of true stealth mechanics and its willingness to grind good ideas into paste through repetition. At their best, though, these scenes produce some genuinely frantic moments.

The Underworld also has some puzzle segments that would be unremarkable except for the use of a "flashback" mechanic that allows Foster to slow time and access a past version of the world. This leads to some satisfying solutions and relatively thoughtful platforming. The flashbacks also provide the best parts of the game's final segment, where Foster has to throw levers and run through a maze. Some levers can only be seen using the flashback, but doing this also summons the game's final boss to stalk Foster.

While this segment shows the best of The Underworld, it's also dragged under by the game's worst aspects. The setting of these puzzles is the blandest possible maze, and the challenges posed drift from entertaining to annoying through excessive repetition. As the segment goes on, it demands tighter and tighter timing (something no previous part of the game asked for) and offers the player too few ways to help herself. Besides all that, this was the only segment with serious bugs, which were bad enough that I had to kill the program from the OS twice.

It's a pity that Doorways: The Underworld ends on a low note, because it does have some neat concepts and gameplay. The flashback mechanic's transformation of levels is a cool idea and the way it summons the big bad in the final section creates interesting tension. Unfortunately, The Underworld knocks itself down with repetition and occasionally infuriating design. This third chapter shows more promise than both of its predecessors combined, but serious flaws still make it hard to endorse. Rating: 5 out of 10


Disclosures: This game was obtained via publisher and reviewed on a home-built Windows 7 PC equipped with an Intel i7 processor, 8 GB RAM, and a single Radeon R9 270X video card. Approximately 4 hours of play was devoted to single-player mode and the game was completed.

Parents: As of press time this game has not been rated by the ESRB. The game contains several instances of body horror including amputations and other extreme modifications, scenes of torture, and a scene where the protagonist rummages in a person's organs. For this content I would rate it M.

Deaf & Hard of Hearing: Most of the story is conveyed through text notes and the voiceover that goes with them won't be missed. There are a few voiced lines that have no subtitles, including some interesting explanatory stuff at the beginning. Some of the stealth-lite bits near the beginning may also be easier for those who can hear.