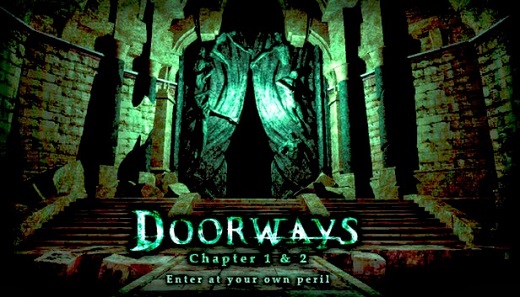 HIGH An unexpected reaction when I tried to grab a key out of a statue's hand.

LOW Ending chapter one without confronting its villain.

WTF What is actually going on in this game?

Serial killers, at least the "gimmick killer" variety that dominates popular fiction, must be the most overrated horror story fodder in existence.

Decades of books, movies, and procedural dramas have used up whatever potential they had to be truly frightening, and games can't do much to revive the subgenre's desiccated corpse. Doorways tries, but can't quite succeed even though it sends protagonist Thomas Foster into killers' minds. Or, maybe the killers go into his mind? It's not entirely clear, because the storytelling, like the rest of the game, is kind of a mess.

Doorways does not get off to a promising start. Its brief, playable tutorial is a nice touch, but one that prevents the game from establishing context. Who Foster is, what he's actually doing, and why he sounds like a game-show announcer are left unexplained, and the game dumps the player immediately into a dark forest.

"Dark" is the adjective of the chapter, which was so damn dark I could hardly see anything. This lack of lighting treads the line between frightening and annoying in games where the shadows hide something that can actually hurt the protagonist. Doorways is not such a game.

The action, especially in the first chapter, is built around choosing routes and finding items. It is possible to die by triggering a trap or blundering straight into one of the ghosts that occasionally blocks Foster's way, but the player doesn't need to dodge anything that's moving. This is just as well, since Foster's movement speed seems to vary randomly.

In fact, the first chapter is so devoid of physical conflict it seems to end without Foster ever confronting the serial killer he's chasing. The guy showed up for a second as a harmless phantom, I put the last few puzzle widgets in the right place, and then the chapter ended. As the next chapter began, I was assured that I had somehow gotten him.

This speaks to a problem that is especially present in the first chapter—much of the story transpires in notes Foster finds rather than in any actions the player performs. The connection between Foster's visions, the killer's actions, and witches and POWs (for instance) is actually interesting, and I would have loved to contribute something to that discovery besides jumping over some spike traps.

The second chapter is more of a success. Set in some kind of monumental building, the case concerns a sculptor who seems just a bit too interested in realism. The psychological direction of the horror in this chapter is a welcome change from the splatter of the first, and because Foster's detective work here is basically just looking at art and thinking about it, the constraints of the gameplay didn't feel like such a limitation on the story. It certainly helped that it wasn't as dark, so it was possible to see everything.

Unfortunately, a significant portion of this chapter is jumping puzzles, and Doorways is not very good at first-person platforming. Two major challenges also involve dodging the attacks of colossal statues. The final one is reasonably clever and provides the kind of closure the previous chapter notably lacked, but the first is marred by the involvement of the game's unwieldy inventory system, which pauses the player but not the world. Though I found some of these challenges irritating, they did more to engage me than the simplistic meanderings of the first.

Doorways is not a polished title. It possesses a tired concept, sloppy storytelling, and horrible lighting in the opening chapter. However, the second chapter is at least interesting, and manages to warrant a playthrough for horror fans. Rating: 4 out of 10


Disclosures: This game was obtained via publisher and reviewed on a home-built Windows 7 PC equipped with an Intel i7 processor, 8 GB RAM, and a single Radeon R9 270X video card. Approximately 3 hours of play was devoted to single-player modes and the game was completed.

Parents: As of press time this game has not been rated by the ESRB. The game contains scenes of torture and a fair amount of nudity, including a brief scene combining these themes where many naked women are tied to posts. It is obviously not appropriate for children and I would rate it M.

Deaf & Hard of Hearing: Most of the narrative is contained in notes the player can read, to which the accompanying voiceover adds little. In chapter two there are a couple of encounters that may be playable without hearing, but I used sound to guide me through both. So there may be some extra challenge involved there.