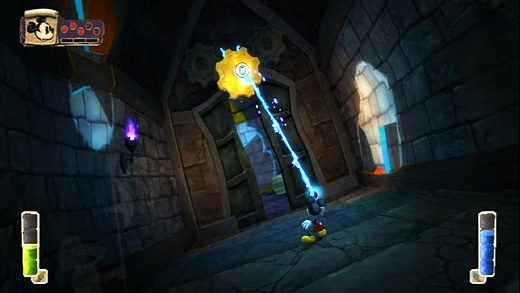 into the Wii and I played a bit of it. I got past the first, easy battle and entered the hallway, where a cutscene began. My mother, who mostly plays Snood, wanted to know why Mickey wasn't speaking. "He's always talked," she noted, and for almost anyone alive that's true. Mickey started talking in 1929, just a year after his famous appearance in the sound-synched Steamboat Willie. Sound has been a famous part of Mickey's history, so it's alienating, especially to non-gamers, to run into an essentially silent version of the Mouse in Epic Mickey. I think the decision to eschew spoken dialogue is defensible, and even clever. However, I also feel that the way dialogue was handled didn't serve the game's aesthetic, because it replaced speech with text.

One can make a positive argument against spoken dialogue because so many of the characters come from the early era of Disney animation, when voice work, while not absent, was used sparingly. Everyone knows what Mickey, Donald, and Goofy sound like, but few players of the game would recognize Pete's voice, much less the voices of Oswald, Clarabelle, or Horace. Although these characters did speak in cartoons, their era was quite long ago and they are, as a general rule, poorly remembered. Indeed, that's part of the point of the game. Silence, or minimal speech, can be seen as a way of situating these characters in some kind of context. Mickey's silence is somewhat alienating, but he's only a visitor in the Wasteland, which one might expect to conform to the cartoons that inhabit it.

I think, then, that there are good aesthetic reasons to skip spoken dialogue, though of course practical considerations may also have contributed. My problem with Epic Mickey is that it deals with this limitation by throwing text onto the screen over and over again. Early cartoons, with limited or nonexistent dialogue, dealt with these limitations through the use of highly expressive drawings. Epic Mickey, however, seemingly lacks the firepower in its graphical engine to make the 3-D models expressive in play, and chooses to use rather limited animations for most of its cutscenes. Consequently, the game has dialogue without speech, and that means text. Although Epic Mickey is a game that is, to a large extent, about cartoons, it solves its communication problem using a conventional "game" approach rather a cartoon-style approach. This breaks the association that the silence is trying to create, making it seem more of an affectation than a considered choice. 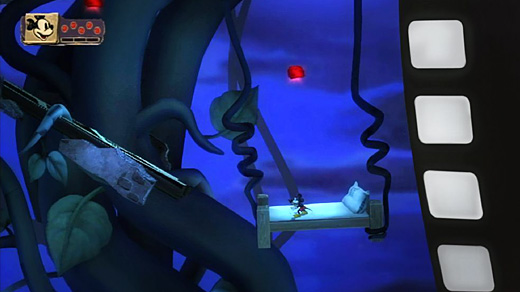 One could of course object that Epic Mickey's plot is a lot more complex than that of say, "Thru the Mirror", and that's true, but very little of what shows up in the dialogue is useful complexity. The game expends a lot of words on unnecessary explanations: concepts that are irrelevant, or ideas that could be conveyed at least as efficiently without words. If Oswald needs to tell Mickey to go to the rocket in Tomorrow City, that can be conveyed with just a voice bubble containing an image of the rocket  behind a "Tomorrow City" sign. If it needs to be made clear that this is an escape route, the voice bubble can show Mickey riding the rocket up into the sky. If words of explanation are needed, the quest screen could always serve as the supplement.

Transforming the words of the characters into images and animations would have relieved the tension of having all that dialogue without speech, and it would have brought the game further into the cartoon motif. We know Junction Point could have pulled this off because the Shadow Blot's trade of the gremlin for the heart operates in a way that's similar to what I've described.

But, what about that heart? The importance of the heart and its usefulness to the inhabitants of the Wasteland would probably be pretty complicated to explain without using words. That's no loss, as the heart subplot only makes the game worse. In Epic Mickey the heart is symbolically inert; if it represents anything it's impossible to figure out what. Mickey certainly doesn't seem to suffer any from its removal, nor does the Shadow Blot seem to benefit from gaining it. The personal qualities attributed to heart are all evidenced by the Wasteland inhabitants just as much as Mickey himself, so the game unintentionally suggests that heart is meaningless. If the heart were anything other than a MacGuffin its significance could be easily explained. Since it is just a MacGuffin, the explanations about it are a bunch of show-stopping blather, and the game would probably have been better off eliminating or revising the whole subplot. It would also have avoided reminding me of Kingdom Hearts, an RPG that in many ways is a better platformer than Epic Mickey (although, in fairness, by Western standards Epic Mickey is arguably a better RPG than Kingdom Hearts).

The problem with the use of text in Epic Mickey isn't that it supersedes spoken dialogue, or at least it isn't just that. If Epic Mickey really is, as it appears to be, a game about cartoons, attempting to communicate with its audience in the way early cartoons communicated, then the extensive text presence interferes with the aesthetic goals that the absence of dialogue is trying to achieve. It seems like Junction Point asked themselves "How can we convey this without speech?" when they should have asked, "How can we convey this without words?" Most of Disney Epic Mickey

's text is superfluous, and it would have been a stronger and more coherent experience had its developers eschewed dialogue altogether.