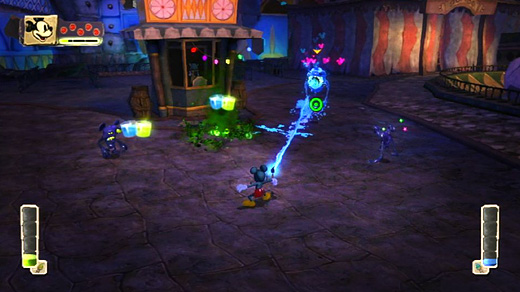 For a mouse, Mickey has a pretty clean image. When he pops up these days, it's to save the world as a brave ruler in Kingdom Hearts, or to help out his pals at the Mickey Mouse Clubhouse. It's easy to forget his mischievous past as a slacker crewman on Steamboat Willie, or the lazy apprentice nicking his master's magic cap in Fantasia. Disney Epic Mickey

owes much to this older characterization, drawing on it to initiate its plot and using it to offer a choice—the player decides which side of the famous mouse's personality to emphasize, Unfortunately, the game never fully succeeds at making that choice compelling.

Epic Mickey begins with the hero making a mess in the sorcerer's workshop again. While fiddling with a magic brush, Mickey accidentally spills a bottle of thinner onto a painted wonderland for forgotten characters.  This "Thinner Disaster" transforms that place into a Wasteland, and creates an evil ink creature called the Shadow Blot. Mickey's predecessor Oswald the Lucky Rabbit manages to mostly contain the blot, making the Wasteland safe for other faded characters like Horace, Clarabelle, and the less-obscure Pete. However, Mickey gets sucked into the Wasteland himself as part of the Blot's ongoing efforts to escape.

Mickey can use a magic brush to spray his surroundings with paint (representing his friendly and helpful side) or thinner (which represents his naughty aspects.) Creating and destroying the environment with these liquids is an integral part of the game's platforming, as the areas of the Wasteland have been badly damaged by the thinner. To cross them he must repair parts of the landscape, or erase and recreate various bits of machinery. 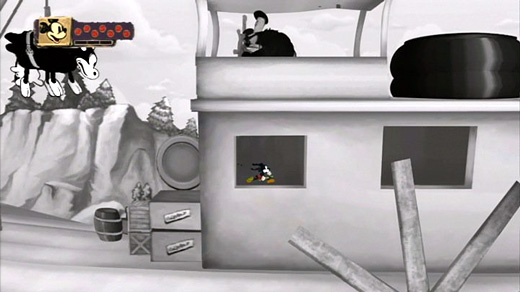 Even when Mickey uses these abilities proficiently, it can be difficult to traverse areas because it was just plain hard to see what I was doing. The camera tends to be uncooperative, often defaulting to a poor position or moving unexpectedly during play.

Those problems are exacerbated by the game's levels, which tend to be close, dark and oppressive. Although the various areas of the Wasteland are thematically inspired by parts of the Disney theme parks, the design inspiration seems to have come almost exclusively from the interiors of the rides, leading to tight areas and a shortage of vistas. When the world does open up, the lack of a lock-on feature often complicates the game's combat.

These hemmed-in zones are connected by 2-D platforming levels related to early Disney cartoons. I hesitate to say they are "inspired" by the animated shorts, because with few exceptions (for instance, the levels based on Fantasia) these don't feel like the gameplay motif grew out of the cartoon. Rather, these levels feel like cartoon visuals plastered onto platforming gameplay whether it belongs there or not. Kingdom Hearts II had greater success with a similar task because its role-playing game (RPG) motif was a better representation of the conflict inherent to many of the animated shorts, which Epic Mickey's platforming fails to capture.

Unfortunately, these 2-D sequences can never be bypassed. The ones players will cross repeatedly are thankfully short and not very difficult, but the downside is that they're not very interesting. I was heartily tired of the "Thru the Mirror" level by my third trip, wishing I could just skip the whole thing. However, this construction does create stakes for the game's numerous and otherwise inconsequential fetch quests, thereby defining a "paint" path in which Mickey inconveniences himself to help others, as opposed to a "thinner" path in which he takes the easy way out. These kinds of choices are omnipresent in the game, including in boss fights and intermediate objectives.

Creating stakes through inconvenience is an impoverished approach, though. Contrast this with the more successful tasks involving Mickey's efforts to retrieve the stolen parts of (exceedingly creepy) animatronic versions of his better-known friends Daisy, Donald, and Goofy. These are also fetch quests, but the wide scattering of the parts through the game zones and the pathos of these characters creates physical and emotional stakes that make the effort seem compelling in a way that repeating "Thru the Mirror" three times in order to bring Horace Horsecollar an ice-cream cake does not. 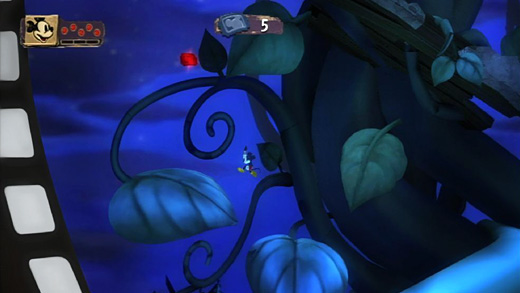 The paint/thinner dichotomy falters in one other important respect; Epic Mickey wants you to believe that Mickey's choices matter, and that they have a strong effect on the Wasteland, yet the player is carefully insulated from consequences.

For example, Mickey can deal with most bosses using paint or thinner, but the only real effect of this is to change a few scenes in the ending cinematic. And, probably because a happy ending was mandated, choosing to use thinner more often doesn't change the most emotionally-charged aspects of that closing. No matter what you choose, restoration is the order of the day. Other choices in play are also robbed of relevance—whether the player restores every last inch of OsTown or transforms Clarabelle's garden into a vast, gaping pit, everything is reset to the beginning state when the player leaves and returns. Epic Mickey actively argues that choices are irrelevant, seriously undercutting the core ideas of its narrative.

The main boss of the game represents a similar dead end. The Shadow Blot came into being as a distorted caricature of Mickey himself, and at the close of the game it attempts to steal and use his heart. The symbolic potential of this subplot is ignored. Although the fight against the Blot itself occupies almost a quarter of the game, it is taken up with platforming and zapping fluorescent green pustules off the surface of tentacles. I never felt like I was really coming to grips with the Blot and what it represented, not even when I was literally inside the thing.

This is the essence of Epic Mickey's problem—it is a game that is wealthy in ideas and middle-class in execution. Considering that it's essentially a playable version of a theme park, it has a startling depth of concept, making it the best of Disney's adaptations of its physical properties. Its vision, however, is incompletely, and sometimes incompetently, expressed.

That said, nostalgia and familiarity will probably sustain players, especially Disney fans, through Epic Mickey's errors and inconveniences, and the game benefits tremendously from its emotionally satisfying story arc of redemption and reconciliation for Mickey and Oswald. Its reach exceeds its grasp, but at least Disney Epic Mickey

is reaching. Occasionally it brushes its fingertips up against something amazing that might have been. Rating: 7.5 out of 10.


Disclosures: This game was obtained via retail store and reviewed on the Wii. Approximately 16 hours of play was devoted to single-player modes (completed once).

Parents: According to the ESRB, this game contains cartoon violence. Young children may not appreciate the exceptionally creepy take on beloved characters like Goofy, or the disturbing fate of Ortensia. There's little real violence, although there are some harrowing sequences.

Deaf & Hard of Hearing: Most dialogue takes the form of text, but the opening and closing movies are narrated and lack subtitles. Many enemies can be heard before they are seen, so deaf players may have more trouble in certain areas. This game requires two hands to play, and Mickey's primary attack is carried out by shaking the remote. A left-handed control scheme is available.