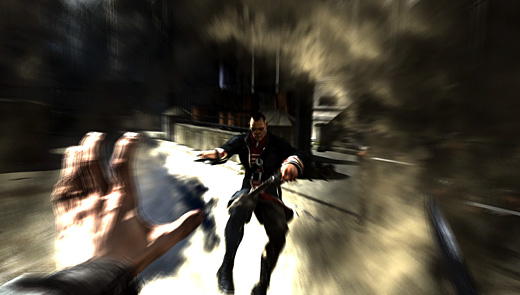 WTF Sending a woman off to a life of imprisonment and rape is the positive, "low chaos" option?

In the modern petrochemical era, whaling seems like a quaint activity, confined to musty Yankee literature and modern Japanese pet-food manufacturing, yet it's really quite a disturbing concept. From anatomical studies, we know that whales have the appropriate neural equipment to not only feel pain, but also to experience real suffering on account of it. Cetaceans have exhibited both self-awareness and behaviors reminiscent of human culture. All of this suggests that the whale-oil prosperity of Dishonored's fictional city of Dunwall depends on the murder of sentient beings. Yet Dishonored

has no interest in exploring this or any other interesting idea suggested by its setting or scenario.

In many respects, it's almost impossible to overpraise Dishonored. My colleague Daniel Weissenberger has laid out many of its virtues, and yet it's hardly enough. The painterly beauty of the levels and characters strikingly refutes the argument for photorealism. The level design ranges from merely good to transcendent, creating challenge and opportunity from spaces that succeed not only as fields of play but also as depictions of the places they purport to be. The Golden Cat is as entertaining to navigate as it is convincing as a representation of a brothel.

Despite all those positives, I initially found it quite difficult to interest myself in playing the game. Dishonored presents the player with a thoroughly conventional scenario that almost immediately turns the setting into window-dressing. Rather than engaging with Dunwall's stratification of wealth or economy of murder in any serious way, we get treated to a simple tale of revenge.

For the bulk of the game, the protagonist Corvo takes orders from a group of colorless, expository characters to traverse Dishonored's magnificent levels to murder people that he does not know. The dullards who are nominally on Corvo's side will supply a perfunctory justification for the killing, but in general the game supplies little reason to feel anything about the targets at all. Much the same can be said for the rest of the cast. 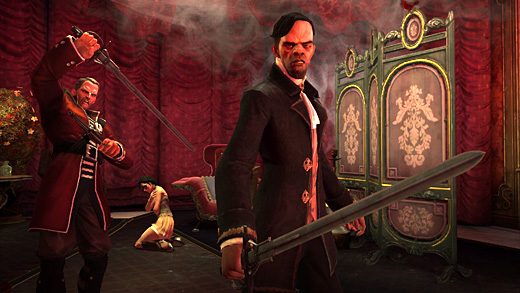 With the lone exception of Susan Sarandon's deliciously batty Granny Rags, Dishonored contains almost no characters worth remembering, or even talking to. The greatest offender is the Outisder, an ominous spirit feared by Dunwall's citizens who grants Corvo magic powers. He manifests as a bland dude in a leather jacket voiced by a somnolescent Billy Lush. Dishonored's most dubious achievement is that it makes the Devil seem boring.

Dishonored occasionally flirts with saying something about the division of wealth, most notably in the opulence of Lady Boyle's party, and the Lord Regent's explanation for his misdeeds—which, alas, exposes the game's positively sinful use of audio logs. Any hope of following this angle, however, is undercut by the fact that the game constantly makes adversaries out of the poor.

This gives us an interesting tally.

If a person or creature lives within the boundaries of Dunwall, chances are it is horrible and it wants Corvo dead, so pacifism seems like a bizarre response. Dishonored, however, actually hands out a judgment in this regard, offering the player a happy ending in exchange for sparing this sea of scumbags. 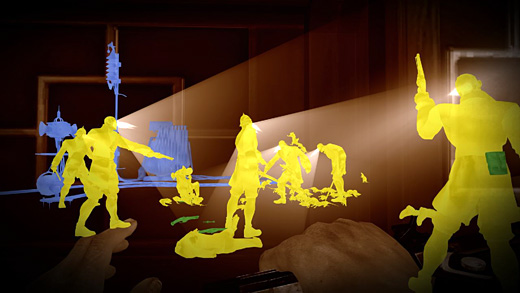 The less murderous path, however, feels hacked-in, almost like a last-minute addition. Abilities and buffs that specifically benefit a non-violent approach are few, and equipment and upgrades are almost entirely irrelevant to a pacifist run. On a narrative level, the non-violent options seem ad hoc, and manifest as a parade of absurdities ranging from the mild (a back-alley cutthroat spontaneously offers to take two targets off Corvo's hands without killing them) to the sickening (giving an unconscious woman to a jilted lover who promises to imprison her forever).

Even on the strategic level that Daniel found so interesting, the dichotomy seems weak. The increase in Weepers and rats poses only a minor additional challenge, even if Corvo murders his way through the game from the beginning.

Dishonored can't draw a motivation for a peaceful playthrough from its main character, either, because Corvo is a complete blank. He has no backstory of emotional significance, no adversarial relationship with most of his targets, and neither says nor can be made to say anything important through the entire duration of the game. Corvo cannot have any motivation one way or another.

Nor can the player, at least not as part of the world, because Dishonored offers no convincing point of sympathy, nor even any real point of antagonism. As striking and original as its concepts are, the world and characters become a great blandness. Only the metagame offers any kind of motivation. Pacifism and violence simply become ways to get this achievement, see that ending, explore this self-imposed challenge.

When a player comes at the game this way, Dishonored truly shines, showing off the depth of its levels and the flexibility of its mechanics. It's just a shame that these motivations don't flow organically out of an emotional or intellectual engagement with its world. Arkane is content to let its concepts lay flat against the wall, and engage the player only on the level of stabbings and chokeholds.

is the better part of a great game. And what a magnificent part! I could play with it for years, and probably will. But I will only be playing with it, poking and prodding its systems to see what happens, completely detached from its thin plot and cast of bores. Dishonored is a wonderful toy, with beautiful art and a fascinating setting, but like its protagonist, it has nothing interesting to say. Rating: 7.5 out of 10.


Disclosures: This game was obtained via Steam purchase and reviewed on a Windows 7 PC equipped with an untweaked Intel i7 processor, 8 GB RAM, and a single Radeon 6800-HD series graphics card. Approximately 50 hours of play was devoted to single-player modes (completed 3 times).

Parents: According to the ESRB, this game contains blood and gore, intense violence, sexual themes, and strong language. All of that is true, and to it I might add that there is constant use of alcohol and tobacco, NPCs urinate on screen, one level is set in a brothel, and one target is disposed of "non-violently" by sending her off to be locked away and raped for the rest of her life. So. Not for kids.

Deaf & Hard of Hearing: Most spoken lines have subtitles, but they can flash off screen rapidly or become difficult to follow when multiple voice tracks are triggered simultaneously. I have seen some complaints about the readability of the subtitles, although I personally had no problem. In addition, a piano flourish sounds when you're detected, and is a much more effective warning than the visual counterpart (lightning bolts around an NPCs head) you might not see. The resulting increase in difficulty is minor unless you are attempting to ghost the levels.

All of that nit picking on the games better designs but nothing on the atrocious AI?

For me the characters and settings are fine its not great but at least what you can expect from an average game. The AI is so bad its game breaking bad.

I was having the same thoughts when going through Dishonored. The world looks so nice and has so many interesting ideas, but absolutely none of them are explored in any meaningful manner. Pushed from mission to mission by shallow stock-characters I was more often than not wondering why I should show restraint with my powers. I mainly did it because I was aiming for a “low chaos” playthrough, but there was no in-game motivation for doing so. Most powers favor the guns-blazing-approach and almost everything that wasn’t a building was hostile. It reminded me more on Bioshock than anything else,… Read more »

Like most modern games it goes through the motions but once you get skin deep it turns into a lump of pretty but boring gray goo.

The AI was not toned down for console players it would have been great IMO.

I think part of our disagreement stems from what we view as harm. You seem to see knocking the guards out or killing them as a difference in kind. I see it as a difference in degree. Choking someone to unconsciousness is not so very far from choking them to death, as a physical matter, and while Corvo is restraining himself from lethal force, he is still hurting people. That said, I think the idea of restraint is an interesting one, and Rowan Kaiser’s article on this angle is a great read. The thing is, I don’t feel like the… Read more »

Hmm… I agree that at face value most of the characters have little of interest to them. I didn’t actually like Granny Rags as a character even when I knew more about her but I think that’s a matter of taste. I sought out additional information because it was there to be found, though after reading a few pieces I got the sense there was more to these people than they were showing on the surface and so actively looked for information about specific people. This led to an increased use of the Heart for example. With regards to The… Read more »

A lot of these are fair points, Justin. I think my response boils down to a couple of ideas. 1) The characters have no hook for further exploration. Obviously, Dishonored gives you the opportunity to look into the characters’ backstory, but when I did this it was only because of completionist tendencies. That is, I grabbed audio logs and read diaries because this is the sort of game where you do that sort of thing. But I didn’t do it out of a desire to learn more about any of the characters. I think it’s a major failing of the… Read more »

There must be something in the way I approached Dishonored, or the way I read between the lines but I found enough characterisation and motivation for the characters to keep me interested. One example I found particularly noteworthy, was the ambiguous nature of Pendleton’s motivations. Initially he seems to be involved because it’s “all a bit if a lark”, he doesn’t take things as seriously as the others. It’s clear he stood to gain from the removal of his brothers but the depth of that is revealed when you explore his room between missions and hear of the ways in… Read more »