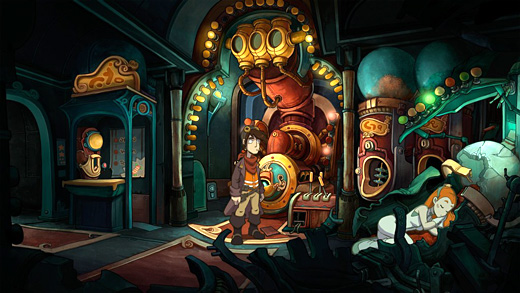 LOW Basically every moment that Rufus opened his mouth.

WTF So we're just not bothering to resolve any of these dangling plot threads, then?

I suppose if you lived in a world made of trash you'd be desperate to escape. Rufus certainly is, and he doesn't seem to care what he has to do to the citizens of Deponia in order to reach the floating land of Elysium. Despite the damage, all of his efforts have been for naught, and much the same could be said of Deponia itself.

For a world made of trash, Deponia certainly looks gorgeous. The hand-drawn world bristles with lovely details, though perhaps not enough for their appreciation to fill the time as Rufus plods to and fro between puzzles. The art successfully sells the idea of a world that has been built from recycled junk and spare parts, from the jumbled construction of Toni's house to the mismatched chairs in the town hall.

If ever there were a setting that would justify the crazy, jury-rigged contraptions adventure games are famous for, this would be it, but Deponia feels strangely short of madcap machines. Of course, the concepts behind some of the puzzle solutions remain as bizarre and frustrating as in any classic adventure game, but one almost never constructs a unique tool from the junk laying around on the planet. It feels strange to have such tame puzzles in a game where the main character builds a space capsule out of junk he found in a planet-scale dump.

Despite this feat, we are supposed to believe that Rufus is an idiot. In a genre well-known for its stupid, self-centered characters, Rufus nonetheless comes across as especially moronic and selfish, to the point of being repulsive. It's genuinely unpleasant to help him succeed, most of the time, and his contempt for the people around him puts a nasty edge on the nimble-fingered nabbing of items that's core to the adventure gameplay. Of course, the folks he's stealing from are pretty wretched themselves, which blunts the pain a bit. Surprisingly, on a planet full of trash, the most noxious garbage is humanity.

Nowhere does this become more obvious than in the treatment of Goal, the story's damsel in distress. Naming a beautiful woman "Goal" has some strange implications in its own right, but the game turns completely creepy when the townsfolk start competing for ownership of her unconscious body, and the men in her life rewrite her memories for their convenience. To its detriment, Deponia plays all of this completely straight, with nary a hint that its developers recognized how deeply screwed up this story is.

The rest of Deponia's plot is serviceable, but no more, plagued by a simplistic core quest and mustache-twirling villains. It sets up a few interesting questions, but punts all of them in an abrupt, vague ending. Presumably this is an attempt to set up a sequel, but I simply can't see why I would bother. Deponia looks lovely, but it squanders its wonderfully screwball setting on unremarkable puzzles and unlikable characters. In the end, that all adds up to a game that's completely disposable. Rating: 6.0 out of 10.


Disclosures: This game was obtained via publisher via Steam and reviewed on a PC running Windows 7, equipped with Intel i7 processor, 8 GB RAM, and a single Radeon 6800 HD-series graphics card. Approximately 6 hours of play was devoted to single-player mode (completed once).

Parents: This game has not been rated by the ESRB. It contains several episodes of alcohol use, as well as a few incidents of mild violence. One character moons another. The game's attitude towards its few female characters is kind of disturbing. One character is a painfully unfunny transgender stereotype.

Deaf & Hard of Hearing: All voiced dialogue also appears in text boxes, and there are no essential sound cues.