I Liked Him Better as a Pirate 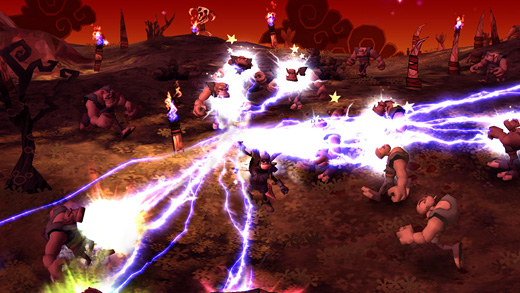 HIGH The orphan Annie quest, which is humorously referential and also cute.

It's only appropriate that DeathSpank is named after its hero, DeathSpank, a pea-brained child in the body of a very violent man. DeathSpank is a very coherent game built around the idea of this person, reflecting his personality in its aesthetics, its combat mechanics, and its structure. That's a great achievement, but it comes with an intrinsic weakness: you can only enjoy this game as much as you enjoy this character. I regret to say I didn't find it very interesting.

The world of DeathSpank looks like a child's drawing, with bright colors and designs that are often very stripped down. The constrained viewpoint allows the 3-D landscape to be filled with buildings and decorations that are essentially 2-D, creating a pop-up book feel to the whole thing. The enemy designs are universally goofy rather than threatening, even for the demons, and often consist of whimsical creature combinations like butterpigs and kangamoos. Even their inevitable gory demise never seems awful or threatening.

A gory demise is a certainty because the game's combat displays the exuberant violence of a boy who decides that if one sword is good, two swords are better, three swords are best, and four swords are bestest. DeathSpank goes into battle heavily armed, never to use a shield or even a spell, and can easily win almost every battle in the game through raw, unchecked aggression. Hitting and killing enemies charges up a "Justice Meter" that allows DeathSpank to deliver even more powerful attacks, not that he typically needs them. Healing items are expensive to buy and DeathSpank can only carry a limited number. If he takes too much damage, though, the penalty for death is very modest. This system consistently encourages the player to eschew strategy and simply hack away at foes until a potion is needed.

Killing enemies, however, does little to increase DeathSpank's level. Role-playing games tend to focus on wiping out mobs, but DeathSpank perceives himself to be an epic hero. Their stories are about fulfilling quests, and he has bought into this in his long search for an obvious MacGuffin. Because leveling up is about fulfilling DeathSpank's picture of himself, most monsters yield an insignificant amount of experience, while main and side quests give a ton.

The quests conform to familiar archetypes: fetch this thing, solve this puzzle, defeat this many chickens, etc. They're usually meant to be funny, and they often are, in a rather juvenile way. DeathSpank is rich with jokes about poop and underpants, from the first moment when DeathSpank mentions he can magically transport himself between outhouses. Sometimes a little sharper satire creeps in, but there are only so many ways to demonstrate the vapidity of the fetch quest and DeathSpank uses all of them a few too many times. For the most part, though, poop jokes and junior-high level double entendres are the order of the day.

As a consequence of all of this, DeathSpank is very coherently built around its childish, brutal central character. Unfortunately, DeathSpank doesn't take a new angle on this archetype or express anything about its constituent genres that you haven't already seen recited in a dozen webcomics and a hundred online screeds by black-hearted gripers like myself. I've had good times with the moron-hero, in no small part thanks to Ron Gilbert's previous Monkey Island games, but I've had my fill. I don't particularly want to watch or read about a guy like this anymore, much less play a game that requires me to inhabit his worldview.

That's why, although DeathSpank does everything right, I couldn't love it. The art direction, the approach to combat, and the writing create an ideal presentation for a character that I just didn't care about. If you're in a similar boat, then DeathSpank will provide little more than several hours of basic hack-and-slash gameplay in a uniquely whimsical setting. If you find yourself genuinely laughing at this character, however, then DeathSpank will be a wonderful comic fantasy romp. Rating: 7.0 out of 10.


Disclosures: This game was obtained via retail purchase and reviewed on the PS3. Approximately 14 hours of play was devoted to single-player modes (completed 1 time). The author of the review corresponds occasionally with an employee of Hothead Games who worked on DeathSpank.

Parents: According to the ESRB, this game contains blood, cartoon violence, crude humor, mild language, mild sexual themes. All of that is true, but it's also generally presented in a pretty innocuous fashion. One quest involves some jokes about a young girl taking candy from strangers that are in poorer taste than the rest.

Deaf & Hard of Hearing: Subtitles are available and there are few sound-only cues. Most creatures will make a noise before attacking, sometimes from off-screen, but this isn't much of a disadvantage.