My Coffee Warned Me About It 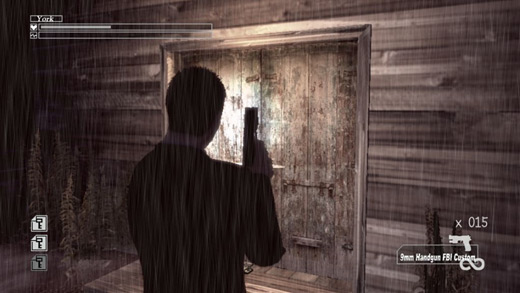 LOW Driving around town with my car constantly trying to take off to the left.

In a recent presentation at DICE, Jesse Schell envisioned a future in which our everyday activities would be tracked and rewarded by game-like systems. Your toothbrush, for example, could award you points for brushing, with bonuses for going a full three minutes or brushing every day of the week. Deadly Premonition is a window into that future, explicitly rewarding the player for making its protagonist shave, call home, or put on a clean shirt. Mentioning this in the lede may be foolish, for now you know the most interesting feature of Deadly Premonition, and I am obligated to forgive you if you skip the rest of the review.

Deadly Premonition puts the player in the role of Zach, the second personality of an FBI agent named York who desperately needs psychiatric help but is instead sent alone to help the sheriff's department in the rural town of Greenvale solve the gruesome murder of a young woman. Agent York constantly talks out loud to Zach and mentions him to others, yet the people around him view this as merely odd behavior rather than a serious derangement. York's weirdness doesn't end there: he investigates using an erratic, even irrational approach, and sometimes looks for clues in the shapes his milk makes as it swirls into his coffee.

Greenvale exists in the game as a fairly large open world that must be navigated using the worst driving simulation of this console generation (I hope), and possibly the worst of the last one, too. The boxy cars cheerfully disregard all notions of momentum and have hopelessly twitchy steering. The small charm of being unable to exceed the speed limit in a police car (only in games and film do police cars obey this maxim) or having the option to use your turn signal and wipers does not compensate for the misery of actually directing the vehicle from one place to another. The scenery, too, is cheerless; the town offers little to look at, the other vehicles on the road are sparse and annoying, and almost nobody is outside.

When he gets to his destination, York usually must chat up some of the locals in an almost completely non-interactive fashion, or investigate a crime scene using his psychic profiling powers (or are they Zach's?). In the latter case, the reality of his location warps into a decrepit otherworld inhabited by clown-faced monstrosities that want to shove a hand in York's mouth. York moves and aims his weapons using the over-the-shoulder look made popular in the genre by Resident Evil 4, but Deadly Premonition's combat doesn't measure up to that standard at all. The aim is simultaneously too twitchy and too slow, and the enemies move either by plodding or teleporting, mitigating the importance of tactics and positioning. Particularly later in the game, these weird creatures are also absurd bullet sponges. Fortunately, it's not too difficult to find weapons with unlimited ammo, a welcome help given the too-frequent locations that have unlimited respawning monsters. 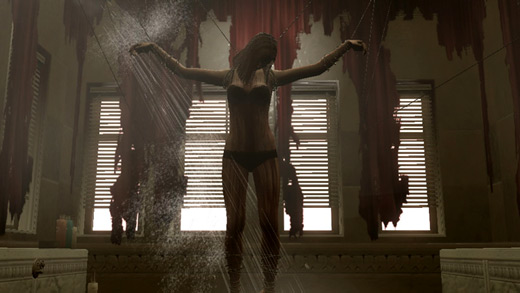 During these otherworld segments, the game's central antagonist, dubbed The Raincoat Killer, occasionally puts in an appearance. No matter how well-armed he is, York usually must either hide from the murderer or run from him. The former encounters are perfunctory and uninteresting, but the scenes where York flees would probably work quite well except that the game requires awkward, pace-killing interactions at almost every obstacle. It seems York is the least fit agent in the FBI, unable to leap even low benches in a single bound.

As genre conventions dictate, York's psychic profiling powers will not allow him to catch the perpetrator before a substantial pile of bodies has accumulated and somebody has turned out to be a pathetic, lovelorn cross-dresser. An important clue turns out to be a red herring, and the murderer's identity is an implausible twist. The townsfolk, however, generally just go about their daily lives, and despite the mounting body count, nobody seems to be alarmed that the only experienced detective on the scene talks to an imaginary friend and uses his morning coffee as a horoscope. Perhaps they have become acclimated to oddity thanks to the rich man in a skull-shaped gas mask who communicates through a rhyming assistant.

Survival horror can be played off as comedy quite effectively; House of the Dead: Overkill is a masterful example. York's outlandish behavior, the bizarre supporting cast, and the absurdities of the plot provide more than sufficient fodder for laughs, but they become less entertaining than they could be because the game is constantly winking at the player. The reaction shots and musical cues constantly oversell the humor, like a vaudeville drummer hitting a rimshot for each phrase of the setup and two on the punchline. I got the impression Deadly Premonition was trying too hard, a sin which prevents it from even being good camp. Overkill also maintained a similar tone throughout, something Deadly Premonition can't do without turning the rape and murder of young women into a joke. At the crime scene and in the investigations the tone must therefore shift dramatically, a transition that the game navigates with the effortless grace of a man falling off a cliff.

It is no surprise, then, that the endgame lands with an almighty thud. Deadly Premonition closes with a series of multi-stage boss fights based on precision shooting, leavened with enough inane cut-scene chatter to make a Final Fantasy game blush. What little tension is not ruined by the banter dies in the fights themselves—slow-paced affairs that compensate for their poor legibility with ponderous pattern repetitions that drain them of all risk. These are chores rather than battles, and the escalating grotesquerie of the bosses contrasts so brutally with the game's otherwise muted spookiness that I wondered if they might have been tacked on by another developer.

I'm inclined to make allowances for a budget title, and the quantity of content here goes far beyond what one might expect for a cheap game. A larger budget might have saved the driving physics and improved the experience of the town, but no amount of money could repair the terrible writing and wrong-headed design that really sink Deadly Premonition. If your wallet is light, I note that for the same price, you could instead buy Overkill, a game of admittedly lesser ambition that must console itself with merely being well-paced, funny, and fun. Rating: 4.0 out of 10.

Disclosures: This game was obtained via retail store and reviewed on the Xbox 360. Approximately 24 hours of play was devoted to single-player mode (completed 1 times).

Parents: According to the ESRB, this game contains blood, intense violence, partial nudity, and suggestive themes. The crimes in the game are the violent murders of young women; some of them have also been sexually assaulted. Many of the in-game deaths are quite gruesome. One character extensively describes physical abuse he suffered as a child. York smokes regularly and several characters consume alcohol in the course of the game.

Deaf & Hard of Hearing: All dialogue is subtitled, but sound cues are very helpful in alerting the player to the presence of enemies. The difficulty of the combat segments will be increased for those who are hard of hearing.

Sparky, I think you are over-reading the intentionality of the “humor” in Deadly Premonition. I don’t find it to be nearly as telegraphed and obvious as you seem to. Rather I find the game genuinely idiosyncratic and ambiguous… unlike Overkill. Honestly, your review of Deadly Premonition reads like my thoughts on Overkill. Overkill is the sort of thing I find telegraphed, calculated, and hokey. Its mock b-movie aesthetic is utterly perfunctory, and the way it expects me to be impressed by tits and bad language feels juvenile. It’s the videogame equivalent of Snakes on a Plane. I’ve played Deadly Premonition… Read more »

Only Bruce Campbell could save Deadly Premonition.

Yeah, I love to laugh at the movie Battlefield Earth but I’m not sure I’d enjoy a 20-hour version of it. Not even Scientology could save Deadly Premonition.

Any game that doesn’t give a damn about its graphics and shows itself inspired by Twin Peaks and the Silent Hill/Resident Evil power duo is obligatory in my book. Every cutscene and gameplay video I see intrigues me more and more. In a dump of highly polished formulaic third person something, this looks like an iconoclastic blessing. And its world seems massive. It looks so positively offbeat and wacko that I can’t help wanting to play it. I love how you write, Sparky, but giving a 9 to Bioshock 2, a game I finished, yawning during 80% of its playtime… Read more »

I know that there’s a part of the critical landscape, obviously championed by Jim Sterling, that thinks this game is a backwards masterpiece, so bad it’s amazing. Of course, that kind of humor is pretty hit-and-miss, and I felt the lousy gameplay (and the labored switches in tone) got in the way. There’s so bad it’s good, and there’s so bad its terrible, and for me Deadly Premonition ended up being the latter. But hey, it’s just $20 and maybe 20 hours of your time, and at that price maybe it’s worth the risk. As for the PS3 version, I’m… Read more »

For every negative review I read about this game, I’m one step closer to buying it. Let’s hope they release it soon for the PS3.

But… but… Destructoid gave this game a 10! I expect nothing short of a self-aware work of macabre genius.

Yeah, it’s a shame. Even the PS3 version, called Red Seeds Profile, can’t be shipped to Europe through play-asia.

As far as I know, Ignition hasn’t announced any plans for a release of Deadly Premonition in Europe, and I don’t think Access Games has cut a deal with any other publishers.

Do you know if the game will be released in Europe?

[quote=ckzatwork]Yeah, it’s a shame. Even the PS3 version, called Red Seeds Profile, can’t be shipped to Europe through play-asia. [/quote]

There are some copies on Ebay but these are Japanese. Hoping for a region free 360 copy.

too conservative to be reviewing any M rated games… Especially campy B-rated syle survival horror games targeted at old school gamers… It is not for the faint of heart, or the fanboys that believe every game should be the same (which most seem to be these days) UUGGGHHH ALL I WANT IS GRAPHICS AND FAST PACED SHOOTING BLAH BLAH BLAH….. I have actually been going back to older systems because I am sick of all of the new games these days being based solely on graphics and pulling the triggers (or L2 R2)… No good story lines or delivery thereof,… Read more »

[quote=Zolos]Do you know if the game will be released in Europe?[/quote]

Rumors say that Rising Star Games will bring the game to Europe, but it isn’t confirmed yet. Go to Rising Star boards (http://www.risingstargames.com/forum/viewtopic.php?f=27&t=62&start=280) and post asking for a PAL verison!!