In Space, No One Can Hear Your Strings 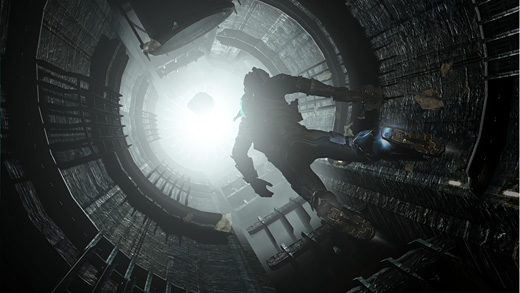 HIGH The desperate and well-conceived opening moments of the game.

WTF Why don't they just lock Clarke out of the maintenance tunnels?

Three years after his harrowing experience with the necromorphs aboard the starship Ishimura in the original Dead Space, Isaac Clarke awakens on Titan Station just in time to experience another outbreak. Dead Space 2

begins in desperate flight from these monsters, but to its detriment it becomes a game where the player eventually dominates them.

The game kicks off strongly, with Isaac trapped in a straitjacket and forced to run from a sudden attack of necromorphs. He stumbles through a medical section, jury-rigging his basic tools from components of the medical equipment around him. It's a near-perfect way to (re)introduce the character and his primary capabilities. Isaac Clarke isn't a space marine; he's an engineer, and it feels right to have him MacGyver a gun out of a flashlight and a surgical tool.

This matters because, despite his silence and seeming lack of personality, Isaac Clarke defined Dead Space. Both it and its sequel owe a large and obvious debt to Resident Evil 4—too obvious, in some places. What separated Dead Space from its influences, aside from the space setting, was that it was informed by an engineer's values. Resident Evil 4's relative abundance of ammo and powerful weapons turned it into less of a horror game than a horror-themed take on a traditional ammo-spewing shooter.

The necromorphs of Dead Space, unimpressed by headshots and practically immune to body blows, could only be injured by accurate shots on the limbs, however, and the game's restrictive inventory system put ammo at a premium. Combat in Dead Space therefore demanded great precision under pressure. That emphasis was complemented by Isaac's physics-based abilities, his arsenal built from repurposed futuristic power tools, and a storyline that required him to fix the badly-damaged Ishimura in order to progress. The adventure was strongly tailored for the character, even though it didn't provide much insight into him.

Although Isaac speaks now, Dead Space 2 retreats from those values. Careful aiming is still important, but a proliferation of explosive weapons and area-of-effect options means it's no longer essential. Some of the new enemies, especially the swarming Pack, outright encourage the player to approach the game as a traditional shooter. The most tactically demanding necromorphs are either neutered by the new weapons or, like the Divider, are largely absent. The solid controls allow for a great deal of precision, but the design doesn't always demand that anymore.

The relative strength of the weapons and reduced demand for precision makes the player more powerful in the context of the game, diminishing its ability to inspire fear in combat. Dead Space 2 exacerbates the problem by being too long and too full of encounters. Players get so much practice at the combat that by the end of the game they are too competent for the game's enemies to inspire any fear. Also, because the number of enemy encounters exceeds Visceral's creative capacity, Dead Space 2 constantly repeats itself, contributing to the player's sense of mastery and empowerment.

I learned early on to look for the enemy behind me or even lay traps against that inevitable attack. An occasional, but painful, tendency to telegraph upcoming fights (including the old groaner, creepy violin music) only adds to the sense of environmental mastery. The repetition and failure to allow enough time between encounters also tends to nullify the cheap scares that are the bread and butter of the Dead Space games.

Dead Space 2 repeats itself outside of battle as well. In an early sequence, Isaac crawls through a narrow tunnel, unable to defend himself, and it's stressful and threatening. By the end of the game, however, Isaac will have wriggled through dozens of these tubes almost without incident, making the trips mere first-person annoyances.

This transition from fear to confidence is the main feature of the Dead Space 2's emotional trajectory. That's not a total disaster, because the game's narrative is about Isaac coming to terms with the loss of his girlfriend. This story works reasonably well, but the arc tends to suffer at the hands of the design. Dead Space 2 thoroughly trains players to seek out items and then foolishly places them in areas where exposition occurs. No matter what Isaac's glowy-eyed ex is saying, it won't have much impact if the player is distracted by the nearby twinkle of a power node. 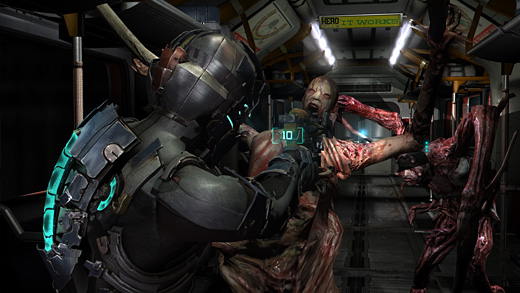 The game could have solved this problem the same way as Silent Hill 2 did, by putting the exposition in a long hallway, because Dead Space 2 has its share of those. Titan Station is also called the Sprawl, a name that makes no sense in play because Dead Space 2 is not as careful as its predecessor about placing Isaac's explorations in a larger physical context. At least when it shows off its open, livable areas, the game includes some convincing and memorable spaces, but too much of it reprises the stale crate factories we've been exploring since the 90s.

Dead Space 2's endgame feels like a culmination of its problems. Coming off one of the most openly copied sequences in the game, Isaac commits a supremely destructive act and enters a generic-looking research area of indifferent design. He is then pursued by a regenerating necromorph until he reaches the site of the final battle.

This is, of course, a repeat of something Visceral did in the first game, but at least then the creature was a major threat throughout much of the ordeal in the Ishimura. Here, the regenerating foe appears and vanishes without even a word from a mad scientist, nothing more than a 10-minute bogeyman to make a confusing little chase seem more harrowing. It's creatively bankrupt, and reads like an admission that Visceral had run out of ideas for challenging the too-powerful player. A simplistic final battle filled with a cheap, inexhaustible stream of the bullet-fodder Pack enemies only reinforces this impression, even as it encourages a spray-and-pray attitude that is antithetical to the series' core ideas.

When Dead Space 2 stops copycatting itself and other games, though, it manages to shine. That opening sequence, a disorienting upside-down fight against a wave of necromorphs, and a few other moments show that Visceral have some real talent for creating interesting new experiences. Yet, that ability is all too rarely indulged, and by its end Dead Space 2 has transformed completely from a precision-focused horror game about a man who fixes things into an empowering shooter about a destructive dudebro with a kinesis module. Dead Space 2

is pretty good at that, and the technical work is almost unimpeachable, but something essential has been lost. Rating: 7.5 out of 10.

Parents: According to the ESRB, this game contains blood and gore, intense violence, and strong language. Players will be cutting apart dead bodies regularly and stomping defeated enemies to pieces in a shower of blood. The enemy monsters include transformed children and babies. Parents from cultures where dead bodies are treated reverently may find the game especially disturbing. Particularly in the early going, the game can be very intense and frightening. There is some swearing.

Deaf & Hard of Hearing: All dialogue is subtitled, but sound is a critical part of gameplay. An audio cue is often your only indication that enemies are nearby, so hard of hearing players may find the difficulty is increased substantially.

I enjoy reading a review of this type from Gamecritics.com, not because it appears to stand biased against a critically acclaimed game, but because it is the type of review that addresses a game’s structure beyond the standard bells-and-whistles, and to flesh out the flaws (that other reviewers seem to miss…) For the $60 retail price that Dead Space 2 came with, there were only a few redeeming qualities that could be mentioned. The addition of the stalker enemy type was especially an interesting use of the Dead Space atmosphere, even though they could be counted on to engage in… Read more »

So it never crossed your mind to turn up the difficulty?…