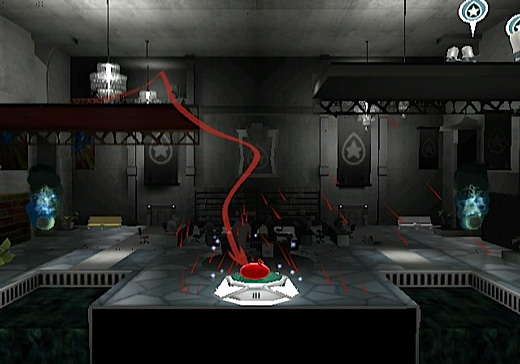 HIGH Rolling through a completed level with the music blaring and a colorful party going on all around.

LOW The bosses feel totally out of place.

WTF Why have a timer?

Traditional games, from chess to basketball, reward skillful play; they are designed to challenge the player to master a set of mechanics and reward him for doing so. Play, be it climbing a tree or coloring in a book, is more open-ended and experiential. Mastery, even if possible, is irrelevant. Video games started out being most like traditional games, but have begun to make themselves more like free play. de Blob 2

straddles this divide uncomfortably. Fundamentally it resembles a moving coloring book, but the fun is mitigated by the developer's attempts to force it into a goal-oriented approach.

The mostly disposable story of de Blob 2, depicted in skillfully animated cut-scenes and short comics, once again concerns the efforts of Comrade Black, a conformist ink creature bent on world domination. As before, he takes over a city, draining it of color so he can imprison the vibrant Raydians who inhabit it and capture the physical manifestation of their misery in the form of toxic ink. This seems like a job for the Blob, an amorphous creature that paints anything it touches.

As Blob returns color to each area of the city, the Raydians are set free, the plants come back to life, and raucous music starts to fill the air, making each level feel like a slow-starting party. An area with a college-campus theme fits the mood perfectly, capturing the party atmosphere as well as the game's lightly political posture. That college level also shows off design decisions that conflict with the game's spirit. Too often the levels feature neatly-divided areas that are spread out, creating zones of sterile, empty space. de Blob 2 is at its best when its levels are dense, with well-networked zones, and vertical, so that Blob is never far from the celebration.

Verticality would have been a nightmare with the original game's control scheme, but de Blob 2 takes an important step forward by almost entirely eliminating motion control. Jumping is now accomplished with a button press rather than by shaking the remote, allowing for much more precise (and less tiring) platforming. That's not to say that the action is crisp—the jumps are floaty and Blob tends to slide around on surfaces. The heightened emphasis on platforming also manifests in the 2-D segments Blob can squeeze himself into, which allow our hero to do more interesting things with the game's buildings than just slosh paint onto them. 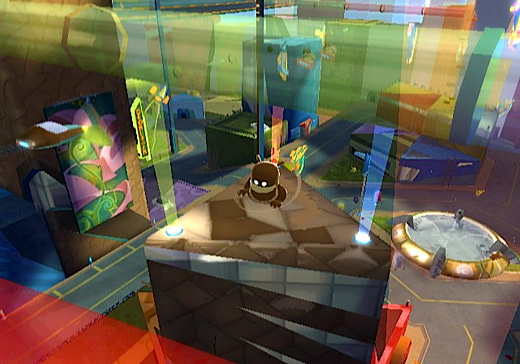 Almost nothing in the game requires precise jumping, however, and even when it does the game's jump-targeting simplifies things enormously. As a result, de Blob 2 is a very easy game, and one that lacks higher-level incentives for perfecting play (such as the beads of Kirby's Epic Yarn). A score is given at the end of the level, and there are some collectibles, but these reward thoroughness more than skill.

Failing a level is pretty difficult in its own right, although technically still possible. Blob can die from a few hazards, but with healing paint and water always nearby the danger is minimal. The fact that the levels are timed could in principle provide additional challenge, but that's not how things play out in practice. Even when I was intentionally screwing up, I finished every level with minutes to spare. The initial allotment of time isn't always enough to finish the level, but each level has copious sources of extra seconds.

Except for the final level there are no side-challenges during normal play. Otherwise, once Blob has reached the end of a level, extra challenges become available. At this point there's no timer, though, so the player is never forced to choose between these extras and the main mission. While this makes for less pressure, it also minimizes replay, as there's no reason for a player to miss any of a level's content on the first visit.

The timer also produces incentives that make the overall experience less fun. The extra time awarded for freeing Graydians from their monochrome buildings encourages players to paint everything in sight on their first run through the level. As a result, many of the post-level challenges will be completed before they're even received. The process of rolling up to an indicator, being told you've already completed the challenge, and receiving a free reward, at times makes the post-level content feel more like a collection chore than a chance to explore each area's nooks and crannies.

towards skillful play don't produce a robust experience of this kind, and undermine the game's better qualities. de Blob 2 is at its best when it discards high-pressure play in favor of chilling out and partying down. By simplifying the platforming and shifting the extra objectives to post-level content, Blue Tongue has substantially improved on the first game's formula. If they'd eliminated the timer and bosses entirely and focused on creativity and exploration, they might have elevated de Blob 2 from being very good to being great. Rating: 7.5 out of 10.

Disclosures: This game was obtained via retail store and reviewed on the Wii. Approximately 14 hours of play was devoted to single-player modes (completed once) and 0 hours of play in multiplayer modes.

Parents: According to the ESRB, this game contains comic mischief, mild cartoon violence, and mild language. Only the most uptight of parents will find anything to complain about here. However, your children may ask to repaint their rooms.

Deaf & Hard of Hearing and Accessibility Info: None of the game's dialogue is really voiced, and there are no audio cues, so players with difficulty hearing should have no problem. However, the music contributes a lot to the atmosphere, so the game may feel a little less fun. The game uses the Wiimote and nunchuck and must be played two-handed. Colorblind players are likely to have trouble. While the game makes some effort to be accessible to them, in that there is an option to turn on words for the colors, those words only show up in a few places. Significantly, there is no real assistance when buildings need to be painted specific colors. Trial-and-error may work, but when there's real time pressure (for instance in the last level) things will likely get very frustrating.