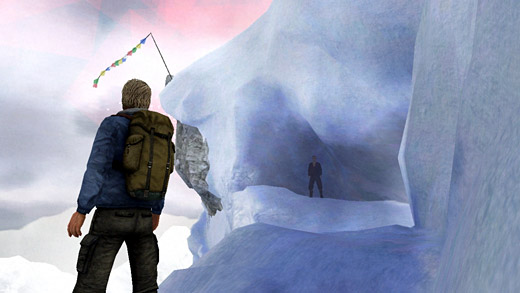 HIGH The moody and atmospheric section in the ice caves, featuring a perfect use of the Wii remote.

LOW The meditation sequences, which feature a painfully imperfect use of the Wii remote.

WTF Am I seriously smashing pots for loot at the top of a mountain?

In a curious way, maybe the climber stops living when he begins to climb. He steps out of the living world of anxiety into a world where there is no room, no time, for such distractions. All that concerns him is surviving the present… He leads a separate life of uncomplicated black and white decisions—stay warm, feed yourself, be careful, take proper rest, look after yourself and your partner, be aware. Be aware of everything until there is nothing but the present and there are no corrosive fears to eat away at confidence.

— Joe Simpson, This Game of Ghosts

Eric Simmons must climb a mountain. Not because it is there, not because it will bring him glory, but because up there in the snow and mist of Chomolonzo, something has gone terribly wrong. His brother Frank, sent to retrieve a sacred Buddhist object (called a terma) from the peak, has gone missing. Angry and murderous ghosts have covered the slopes, somehow released from the "bardo"—a time between death and nirvana or rebirth. Equipped only with Buddhist implements he barely understands, Eric must reach the summit to find his brother and end the curse he unleashed.

Like climbing, Cursed Mountain requires the player to understand and manipulate the surrounding landscape. Survival horror games use atmosphere and resource scarcity to create tension and fear in the player. In Cursed Mountain, as in Resident Evil 4, the scarce resource is the space between Eric, whose best attacks require him to be motionless, and the enemies who are out to kill him. The awareness of space manifests in the player's tactical response to the ghosts: those that move rapidly or can deal damage from across open ground will receive priority, because Eric moves so slowly and has no effective dodge capability. Spatial exploration and management are also key in the life-draining "ghost khorlo" segments, where the player must find and eliminate sigils while avoiding aggressive ghosts. Moreover, the healing incense sticks that can be used to replenish Eric's life are quite plentiful, but can only be used in specific places that are fairly rare. With even modest exploration of the game's world, Eric will always have plenty of healing items and unlimited "ammo"; what he lacks is open ground.

Although the areas the game requires the player to traverse are very linear and generally require very little skill to cross, these features are disguised by their considerable verticality and mazelike design. There is only one way through, but that path is usually not obvious from a distance. Unfortunately the areas where Eric must actually climb the mountain are much less creative. Cursed Mountain is merely the best climbing game one could make based on walking. In the game, Eric uses his feet almost exclusively, except for some wall-climbing segments that differ little from those in Ocarina of Time. For the most part the mountain itself doesn't seem particularly devious: only a few spots require the player to do anything more than barrel straight ahead along an obvious linear path. 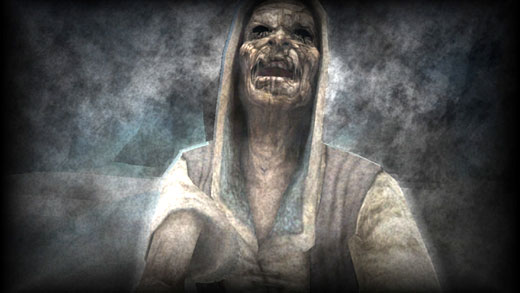 The gameplay also disagrees with the characterization when it comes to item discovery. Cursed Mountain depicts Eric as disbelieving, but respecting, the religion and culture of the Sherpas, as opposed to his brother who is openly contemptuous of them. Yet the game asks the player very early on to smash pots to gain incense sticks, keys, and diaries that explain the events on Chomolonzo. This mechanic feels tired and stilted, of course, but more than that it is difficult to reconcile Eric's supposed uprightness with this degree of property destruction. The level design also fights against the character's central conceit: it's difficult to believe that an experienced, well-equipped mountain climber will be stopped by a relatively gentle slope or a low wall. Even the blocking potential of steep-walled chasms falters when Eric will be climbing sheer vertical rock faces in short order.

I feel such concern for the way the fiction plays because Cursed Mountain's narrative otherwise works quite well. It has rough and awkward moments, like any script, but the principal characters are convincingly drawn, and it efficiently juxtaposes several sets of interesting and compelling ideas. As a big brother myself, I felt empathy for Eric's conflicting feelings towards younger Frank and self-doubt of his own worth as a sibling. The script also sketches out a parallel between another character's quest for literal immortality through the terma with the desire for figurative immortality through mountaineering history. A single, well-depicted near-erotic scene sets up a compelling and troubling connection between Frank's desire to summit the peak and sexual violence against the mountain, which the game's Sherpas see as a female goddess.

Yet the design constantly sells this narrative short, as best illustrated by its dull, prosaic depiction of the bardo as a darker rehash of an immediately preceding area, a sin compounded by the powerful explanation of this spiritual realm delivered immediately beforehand by a Lama. The level offers nothing resembling the test of enlightenment and understanding the Lama describes, just a simplistic prelude to a boss that doesn't seem to symbolize anything.

I cannot chalk this up to a general lack of ability, however, because some levels are masterful, including a maze of ice tunnels that can only be escaped with the help of radio direction from a man who may already be dead. Cursed Mountain shines when it uses isolation, a genuine uncertainty about where to go next, and hints delivered in ways that make the player question whether Eric is even sane anymore. Part of the power of these sequences comes from the fact that Cursed Mountain merely makes one ask about sanity, and resists the temptation to provide an answer. Did Eric really hear Paul Ward? Did he ever really speak to Edward Bennett? Even the game's final moments concern an act of survival at once so implausible and believable a player won't be sure of anything other than the scene's emotional authenticity.

Sadly, Cursed Mountain never embraces its core ideas fully enough to really succeed as a whole game. Greatness always seems just within its grasp, but the game is toppled from the heights by its unimaginative level design and mechanics, and its use of inappropriate gameplay tropes. In its best moments, however, Cursed Mountain truly inhabits the persona of a man whose entire existence relies on his understanding of space and distance, whose whole world is the howling wind and the biting cold and the lonely rock of a mountain that must be ascended, even if it means brushing up against the realm of the dead. Rating: 7.0 out of 10.

Disclosures: The game was obtained by retail purchase and reviewed on the Wii. Approximately 13 hours were devoted to single-player mode, completing the game once.

Parents: According to the ESRB, this game contains blood, sexual themes and violence. This game is not for children. Dead, desiccated bodies are everywhere and the cutscenes feature violence and mature sexual content.

Deaf & Hard of Hearing: You won't be missing anything. All dialogue is subtitled and all auditory cues are simply used to reinforce visual data.