Bust a Crate for Frisia! 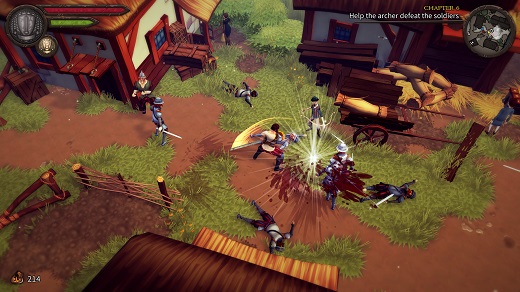 HIGH Unleashing the sword spin move in the middle of a mob and sending them flying.

WTF Oh, this was all just the prologue, huh?

Cross of the Dutchman sets up the story of Pier Gerlofs Donia, a 16th century hero of Frisia, which was a country that has mostly become part of the Netherlands.

Donia rebelled against Saxon occupation, fighting as a guerilla and pirate, though the game covers very little of those activities. Players who want to see the events that made Grutte Pier famous will have to look elsewhere for a representation. What Cross does manage to convey is some of the nature of the man.

By legend, Pier was seven feet tall and able to do things like bend coins with his fingers. In keeping with this, the Pier of the game looks and feels large. For about half the runtime he doesn't even need a sword, he simply punches Saxons to death when they get in his way.  When he does finally receive a weapon, he frequently kills enemies with a single blow.

This efficacy is just as well, because fighting for any length of time in Cross of the Dutchman gets dull. The game is as basic as brawlers come, with nothing but a regular attack combo and a special attack that can be charged up. Pier can switch between fists and sword, but this really just shifts between attacking in a line and an arc. Hit detection is iffy with the blade, though, and I often watched it pass harmlessly through enemies.

The sense of simplicity extends to the game's progression system. The isometric view and piles of cash enemies leave behind may make the game look a bit like Torchlight, but Cross of the Dutchman is no RPG. There's no gear to collect, the shops in the game only allow Pier to buy three new special attacks for each weapon, and four for his physical attributes. Since breaking crates and barrels yields money more frequently than killing enemies, it feels like Pier levels up by smashing the scenery.

It's not bad scenery, though. Cross of the Dutchman has a fairly small world, but it's brightly colored and charmingly detailed. Unfortunately, since the game consists of basic quests that force Pier to walk back and forth, over and over again, it gets old.

In between going here to talk to a guy and going there to kill some Saxons, Cross makes Piers partake in a few awful stealth missions. As is typical for bad stealth in an RPG, being spotted is instant failure. This issue becomes particularly annoying in a timed stealth mission that stretches over almost half of the game's regions. Failure here returns the player to the moment the timer starts, which may mean replaying two whole regions.

The stealth feels especially wrong-headed because Pier consistently kills vast numbers of Saxons. In many fights he slaughters several dozen, so the danger posed to him by being discovered seems minimal. True, in one instance a hostage is at risk, but most of the time the demand for stealth is inexplicable. The timed mission is a great example of this nonsense because between the stealth segments, Pier has to crack some heads. If that’s so, why does he need to sneak through the rest of it?

Considering the body count, it comes as a surprise that this game covers almost none of Pier's career. Instead, the end reveals that Cross of the Dutchman is essentially a prequel, showing the events that led him to take up arms, rather than the ones that made him a national hero.

Cross of the Dutchman feel lightweight and disposable.  The action is basic, the world is tiny, and the story doesn't cover the most interesting bits of the hero’s history. Unlike its giant titular character, Cross of the Dutchman is a thin slip of a game that passes by too quickly to make much of an impression. Rating: 5 out of 10

Disclosures: This game was obtained via publisher and reviewed on a home-built Windows 7 PC equipped with an Intel i7 processor, 8 GB RAM, and a single Radeon R9 270X graphics card. Approximately 3 hours of play was devoted to completing the game once.

Parents: As of press time this game has not been rated by the ESRB. Cross of the Dutchman contains alcohol references, blood, violence, and violent references. I expect it would be rated T, but it's probably fine for anyone over 12 or so.

Deaf & Hard of Hearing: The game has no voice acting or significant audio cues. You should be fine.