I Don't See How That's a Party 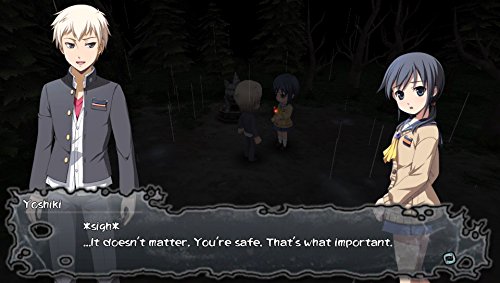 HIGH When the school transforms in the late chapters.

WTF What is the weird obsession with peeing?

The Corpse Party series of games are a blend of survival horror and visual novel that emerged from Japan's dōjin games scene (analogous to Western indie development) in 2008, and build on an RPGMaker original from a decade earlier.

After the surprising quality of teen slasher game Until Dawn, I was hoping to strike horror gold again. Unfortunately, with Blood Drive I merely struck out.

The Corpse Party games pit doe-eyed anime youth against dark forces inhabiting abandoned schools. As I was coming in cold on the third US entry in this series, I expected to be terribly confused for a bit while I worked out who everyone was, but this is one of the few things Blood Drive handles well. The character ensemble and their situation were laid out efficiently so I never felt like I needed to stop and play a previous game.

Unfortunately, the cast is too large to get characterized beyond the broadest strokes, and most of them feel less like distinct entities and more like manifestations of anime archetypes. If anything, I would have preferred less backstory than I got, because I felt that it didn't add anything to the narrative.

Blood Drive constantly elaborates lore only to immediately disregard it or work around it in order to move on to the next plot point. The story therefore feels completely ad hoc no matter how much time the writing spends explaining the intricacies of its world. The plot is a bit of a jumble as a result, with characters' stated motivations and actions never quite aligning. This is frequently true even within particular scenes: nearly everything bad that happens in Blood Drive occurs because characters stand still when they should obviously move.

It also doesn't help that the game wastes time, space, and atmosphere on terrible digressions and bad character design. A scythe-wielding character wearing a top that seems to have been made from two handkerchiefs is the wrong kind of fantasy for this game. That's no worse, however, than a side plot featuring an adult woman with a crush on a high-school boy, or a pointless episode showing a topless middle-school girl.

Because the story spends most of its running time in a wobbly state, it falls to the more active portions to sustain suspense and build horror. They're not up to the task. For the vast majority of Blood Drive, the gameplay takes place in a dark, decrepit school of repetitive classrooms and barely-distinguishable hallways. These hallways turn more freakish and interesting later on, but the game constantly suffers from not being able to show how frightening the school looks to the characters.

The weight that should be carried by the visuals is instead left to text descriptions of objects. The problem is that each object the characters examine is potentially dangerous. Only by walking up to, say, an ordinary-looking cabinet and interacting with it can the player learn that it contains dozens of eyeballs. Performing that inspection, however, may cause the character to get attacked by a tentacle in short order. Because this system encourages the player to avoid content as a means of managing risk, it actively makes Blood Drive more boring.

That said, risk can't always be managed in Blood Drive, and death is bound to happen more than once. The game is filled with gotcha moments that will result in a messy end, as one would expect from the genre. Blood Drive makes dying more irritating than necessary, though, by not including any way to skip or even fast-forward through dialogue the player has already seen.

However, even that is nowhere near as irritating as the pace-killing loading screens. Opening any door triggers one, and so does opening the menu. Worse, once the menu is open, going to a submenu also invokes a loading screen. That means there are two loading screens between normal gameplay and the inventory, for instance.

Also frustrating is that the signposting for progression is terrible—Blood Drive is exceptionally bad at indicating where the player should go or what she should do to advance the story. There are also some puzzles near the end that are basically inscrutable, though the localization may be partly to blame. I managed to muddle through these by trial and error, but not without a few deaths.

Corpse Party: Blood Drive has very little going for it. The amusing contrast of seeing cutesy anime kids in a horror story can't sustain such a jumbled plot, muddy visual design, and irritating construction. It may be worth investigating as a cultural curiosity, but otherwise this is a party to avoid. Rating: 4 out of 10


Disclosures: This game was obtained via publisher and reviewed on the PS Vita. Approximately 17 hours of play was devoted to single-player modes and the game was completed.

Parents: According to the ESRB, this game contains blood, partial nudity, strong language, suggestive themes, and violence. The violence includes things like on-screen decapitations and disembowelment, which is good enough reason to keep this away from kids. The "partial nudity" encompasses a gratuitously topless middle-school girl, which is good enough reason not to let anyone you care about play this game under any circumstances.

Deaf & Hard of Hearing: All dialogue is subtitled (the audio track is in the original Japanese). There are no critical sound cues. Some of the game's atmosphere will be lost without sound.

Colorblind modes: There are no colorblind modes available. The game should be playable as color distinction is almost never critical. However, some of the aesthetic will be lost.

It may be hard to convince you of this, but if possible, I would recommend playing the original PSP Corpse Party. It is, frankly, a much better game, and much more successful at achieving true horror. Corpse Party: Blood Drive definitely eschewed horror in favor of supernatural adventure, whereas the original was pure atmosphere and dread, and had absolutely perfect pacing the whole way through. Its PSP sequel, Corpse Party: Book of Shadows, was also quite excellent, and similarly atmospheric. I feel that jumping straight to Blood Drive may have been a disservice to you, as Blood Drive is largely… Read more »