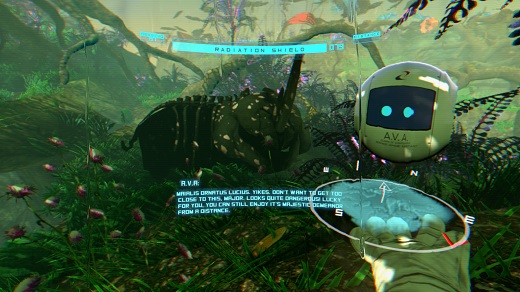 HIGH Coasting among floating islands with a jetpack.

LOW Heading towards an objective, only to repeatedly have a monster turn towards me after I couldn't turn back.

In its first half-hour or so, Corpse of Discovery has a lot of promise. It presents vast, beautiful alien worlds with snappy ways to cross them, and a sci-fi story with an intriguing hook. Alas, the developers make the least of its positives and squander its joy and mystery with poor narrative and thematic choices.

In each chapter of Corpse of Discovery, its main character (the Major) wakes up in a habitat on an exoplanet and receives a mission to do something on its surface. This invariably boils down to chasing down several waypoints while listening to his chatty robot assistant. Equipped with only a double-jump or a jetpack and occasionally managing his exposure to solar radiation, the Major must make his way across the planet to finish his mission in hopes of being rescued.

While this sounds (and generally is) pretty simplistic, Discovery works because of the beauty of its planets. Some of these are blasted worlds containing nothing but rocks and caves, but others are marvels covered in truly alien-seeming life and impossible geographies. Traversing these landscapes, and occasionally just looking at them, was a singular joy. Although each world was vast, Discovery did a great job of keeping each chapter short enough that exploring never got stale.

The only thing that dragged down these planetary explorations was the presence of ghostly, floating enemies that cause instant death if they detect the Major. These monsters move around seemingly at random, but often end up on top of objectives and spot the Major immediately before or after he nabs what he's looking for. Because there's no way to escape once spotted, nor any method of avoiding the creatures besides taking a long detour or waiting for them to randomly move, they add nothing but irritation. A late attempt to explain their presence and make them part of the narrative fails because it's at odds with the logic of how the creatures operate.

The invariable end of the Major's excursions is either failure to contact a rescue mission or escape followed by what appears to be his death. Then, almost immediately, he wakes up again in a somewhat more run-down version of his habitat.

The fact that the Major seems to repeatedly die and then wakes up again in the same building on a different planet creates a bit of mystery, but Discovery's poorly-judged narrative essentially gives away what's happening from the start. The press conference that begins the game allows for only a few possibilities, and the quick and heavy-handed turn towards contemplating the regrets of the working man made the answer so clear I got impatient for the story to catch up.

The emergence of this theme, one well-worn to the point of overuse, dampened the joy of the game for me, not least because it's so clumsily deployed. The Major seems to have no defining personal qualities besides his affection for his family, but Discovery fails to communicate this feeling in any compelling way —his wife and children only ever appear blurry and faceless in holograms. Nonetheless, the Major hallucinates cakes, strollers, and intended vacation spots with perfect detail. If it's the connection to these people that matters, then the people need to show up. Discovery misses this, and only depicts stuff.

Discovery also feels like it's cheating by omitting or ignoring the Major's own drive to explore. The game's worlds are marvelous, and I would have been content to spend hours in them, with or without objectives. Even knowing that a series of irrelevant tasks lay ahead of me, I was always excited to see what lay beyond each time the habitat's door opened. Discovery's failure to acknowledge the sense of awe that its planetscapes inspire feels like a narrative cop-out, and a way of ignoring the possibility that the Major finds his work fulfilling in and of itself.

Because its worlds are so expansive and fascinating, and because moving across them is such a pleasure, Corpse of Discovery might have been an all-time great had it been a straight exploration game. Instead, it grapples artlessly with a theme that has been done to death. The narrative imposition of regret sucks all the life out of a game that could have had joy. When I bounded through an alien jungle or soared through a fragmented, floating landscape, I could only conclude that Corpse of Discovery had gotten its story all wrong. Rating: 6.5 out of 10


Disclosures: A copy of the game was provided for review by the publisher. It was reviewed on a home-built Windows 7 PC equipped with an Intel i7 processor, 8 GB RAM, and a single Radeon R9 270X graphics card. On high settings framerate occasionally dropped inside the habitat but was generally adequate in exterior areas. Approximately 4 hours of play was devoted to single-player mode and the game was completed.

Parents: As of press time this game has not been rated by the ESRB. Corpse of Discovery contains a small amount of violence and a few violent references, but these are really minimal and not disturbing. While the game's themes may not appeal to kids I would nonetheless rate it E10. Corpse of Discovery has minor female characters and no apparent POC characters.

Deaf & Hard of Hearing: Accessibility for deaf and hard-of-hearing players is a problem. Some dialogue is transcribed on screen, and it should be possible to follow the main story with just that. However, some videos that play during the game and a few bits of other dialogue are, for some reason, not subtitled. Some of the richness of the world will therefore be lost. In addition, some dangers give off an audible warning that may precede actually seeing them.