One Step Forward and to the Side 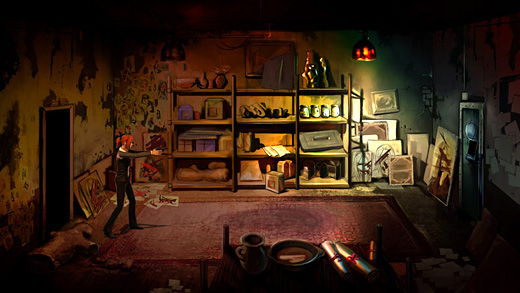 HIGH Taking down the sleazy dean.

LOW Going to a lot of effort to record someone's voice on a dictaphone when I am carrying a smart phone.

When last we left psychic FBI agent Erica Reed, she was trapped in Cognition: The Hangman, a game that suffocated an interesting conceit and solid gameplay beneath a tired premise, overused character archetypes, and ludicrous storytelling. This first episode of Cognition struggled mightily with its storytelling and structure, in particular because it hewed too closely to the conventions of both adventure games and the serial-killer subgenre of police procedurals. Fortunately, Cognition: The Wise Monkey turns out significantly better than its predecessor.

The second installment of Cognition does not initially seem any more promising than the first. The ill-fated local bureau chief from The Hangman has been replaced by an equally archetypal captain and the bog-standard cop dialogue still oozes ennui. Fortunately, following a shocking attack in the first moments, Erica has only limited interactions with Cognition's boring cast of stock procedural characters. Encounters with the poorly-voiced Rose are also mercifully few, with Erica learning only one new trick over the course of the episode.

Erica's new skill builds on her ability to learn an object's past by touching it. Now, using multiple items she can see a shared moment from their past. This allows her to involve her psychic powers in some more complex puzzles than in the previous game, and also lets the developers have a little more subtle control over the pacing of the adventure. Unfortunately, this also requires the game to lean very heavily on its rather clunky inventory management system.

In many adventure games, it's possible to open up the inventory and drag items onto the screen. Cognition, however, requires the player to "load" an inventory item into a single active slot, then click on the place on screen where he wants to use the item, and select the "use item" option. When the inventory is small and only a single item needs to be used, this system isn't too inconvenient. When the inventory gets large, it becomes unwieldy. When multiple items from the inventory need to be used in succession, it's outright obstructive. 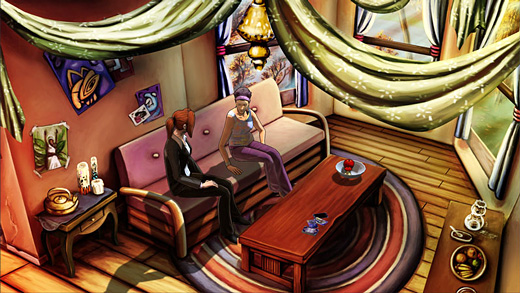 This becomes a particular problem in the game's final sequence. With her partner in danger, Erica must solve a puzzle to open a door and rescue him while the clock ticks. Unfortunately, this requires her to put three objects into four different jars, leading to a tension-killing loop of opening the inventory, searching it for the right item, putting the item into the active slot, clicking on the jar, choosing to put the item in the jar, then repeating the whole process two additional times (or more, if the wrong item got selected).

The gameplay in The Wise Monkey seems a bit rougher throughout than in Cognition's first installment. Several puzzles are illogical, frequently ignoring obviously relevant tools that Erica has in her inventory. Early in the game, for instance, it's necessary to open a car's trunk using a tire iron, even though Erica has a set of lockpicks in her pocket. Some of Erica's powers seem to have changed with little notice, and The Wise Monkey sometimes does a poor job of communicating just what the player should be doing to solve some of its puzzles.

This time, though, the story carries the game through its mechanical rough patches. Unlike the first installment, The Wise Monkey establishes clear stakes right off the bat, then sets up a series of confrontations and challenges that make sense during play, even if they rely a bit too thickly on coincidences. The story's supporting characters also help the game hold up, if only because they don't harken back so obviously to tired cop-show archetypes. It certainly doesn't hurt that the subplots associated with these characters give Erica a chance to be a badass as a detective, not just as a lady with a gun.

The high stakes created by The Wise Monkey's first scenes propel the player through the rest of the episode. Although the game stumbles mechanically in a few spots, it manages for the most part to maintain the tension that The Hangman lacked. Cognition still has plenty of rough edges, but The Wise Monkey seems to promise a better future for the series' remaining chapters. Rating: 6.5 out of 10.


Disclosures: This game was obtained via publisher and reviewed on a home-built PC equipped with Intel i7 processor, 8 GB RAM, and a single Radeon 6800 HD-series graphics card, running 64-bit Windows 7. Approximately four hours of play was devoted to completing the game.

Parents: As of press time, this game has not been rated by the ESRB. The game contains graphic violence, blood and gore and alcohol references. Severed human organs (ears, eyes, tongues) are shown on screen. There is a potentially triggering scene where a man violently attacks his girlfriend. I would rate this one "T" or "M."

Deaf & Hard of Hearing: You shouldn't have any problems. There are subtitles for everything and no essential sound (or color) cues.