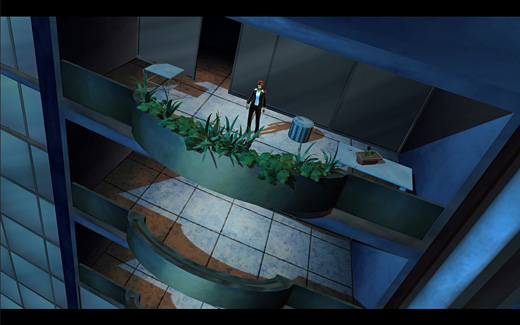 HIGH The clever way the episode lets the player understand the villain.

LOW Being told I couldn't see the rest of a flashback because Erica didn't know something I had figured out immediately.

WTF Where exactly are you keeping that road cone, Erica?

The previous two episodes of Cognition have made it clear that FBI agent Erica Reed is chasing a particularly dangerous individual. Her adversary is a serial killer of serial killers, who has also maimed or murdered at least two FBI agents. The villain is also aware of, and may even be manipulating, Erica's psychic powers. When the killer's newest victim turns up in spectacular fashion, Erica starts to get answers about her enemy and the connection between them. In showing us this, however, Cognition— The Oracle may have revealed too much.

With Erica drawing closer to the killer, the citywide character of Cognition's previous episodes is abandoned. Almost all of The Oracle takes place in a single residential tower, and most of that is spent on the same four or five screens. Although the episode feels very constrained, the tight quarters don't generate any real tension. The killer may be in the same building, but the sense of threat was no greater than if Erica had been in another city entirely.

It doesn't help that the episode's puzzles don't seem to be directly oriented towards the nebulous stakes it establishes. One of Erica's friends is somewhere in the building, possibly in danger. However, the puzzles she solves—none of which I found particularly interesting—don't seem to have any clear relation to rescuing her pal. Instead, most of the effort is focused on finding out more about the killer's past.

That's not necessarily a bad thing because it points towards the episode's key success. The serial-killer genre very often shows the action from the villain's point of view, as a way to define him as a character rather than leave him as an enigma. This poses a challenge in games, because it would seem to require either that the player engage in some seriously disturbing acts (as the killer), sit still for some extended cut-scenes, or be drawn into the sort of bait-and-switch that made Heavy Rain feel manipulative and cheap. The Oracle instead uses Erica's postcognitive abilities to give the player an experience of its villain's earlier, formative experiences. This allows the player to understand later choices without really agreeing with them.

The downside is that it feels a little pointless.

Erica's efforts to help the killer's younger self out of a predicament are obviously destined for an ultimate failure. This makes the effort feel moot, and all the more so because the relationship between these flashbacks and Erica's immediate goal of finding her colleague feels so ill-defined.

Worse, delving into the villain's life means that The Oracle answers nearly all of Cognition's interesting questions. With one episode left, this may seem like jumping the gun, but honestly, even some of these reveals came too late since the adherence to genre norms that has hindered Cognition from the start makes many of the answers clear well before they are stated. This problem extended to the puzzles, many of which frustrated me because I knew necessary answers and hotspots long before the game believed I did. Throughout the episode I had a constant feeling of being two steps ahead of all the characters.

Erica isn't immune to that judgment, and particularly at the end of the episode she makes some obviously dumb decisions. While I didn't think they were implausible, her choices did erode my sympathy for her. That's a shame, because the story systematically eliminated my admiration for the rest of the main cast, too. Everybody in the building at the end of The Oracle has done something unforgivably evil or negligent, and although I wasn't exactly hoping for these characters to die, I wouldn't have shed any tears if the chapter ended with the high-rise collapsing on top of them.

The Oracle continues Cognition's pattern of uneven episodes. It cleverly uses Erica's powers to get around a major storytelling problem, and in that respect it's a great success. On the other hand, the tight quarters and indifferent puzzles make the game less interesting to play than its predecessors,  while the dumb, unpleasant characters make it a less enjoyable story. With one episode to go, I'm not sure what Cognition has left to say, or if I really care to hear it. Rating: 6.0 out of 10.


Disclosures: This game was obtained via publisher and reviewed on a home-built PC equipped with Intel i7 processor, 8 GB RAM, and a single Radeon 6800 HD-series graphics card, running 64-bit Windows 7. Approximately five hours of play was devoted to completing the game.

Parents: As of press time this game has not been rated by the ESRB. Cognition: Episode Three contains blood and gore, intense violence and language. I do not recommend it for children under 15, and would probably rate it M.

Deaf & Hard of Hearing: There are no essential sound cues and all dialogue is subtitled. A few puzzles rely on color cues and may be too difficult for colorblind individuals to solve without assistance.