A Fistful of Clichés 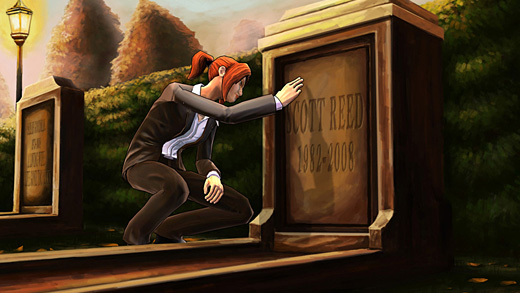 WTF I, an FBI agent, cannot examine evidence at a murder scene because there are too many people around?

As I mentioned in my review of Red Johnson: One Against All, the problem with putting puzzles into a mature mystery is that puzzle-solving often becomes rather silly and difficult to pair with a solemn story. Serial killer mysteries, however, often hinge on puzzles and cyphers, which puts Cognition a bit ahead of other adventure mysteries. The puzzles psychic FBI agent Erica Reed encounters while tracking down two murderers in the first installment of a planned four episodes, while perhaps a bit strange, don't seem out of place in the well-worn serial killer motif. As a result, it's not the puzzles that make Cognition: The Hangman seem contrived and silly; it's everything else.

The trouble starts with the cast, who seem to have been ordered from the catalog of the police procedural character stockroom. We have the no-nonsense boss, the partner who's too old for this shit, the cocksure young hotshot, the irritable coroner, and the tubby crime scene technician / all-purpose nerd. There's even a wise old black woman named Rose who owns an antique shop and explains Erica's powers in great detail with the game's worst voice-acting. Aside from her, the voice actors are competent, although their accents only rarely betrayed that many of them were supposed to be Boston natives.

These cardboard figures then get spun through a series of absurdities. For example, the FBI director invites herself to take over a crime scene, calls all the agents to help out, then leaves three of them standing outside the door. Nobody in the room wears gloves, and potentially significant evidence gets left behind.

Poorly designed scenarios like this rob the game of the air of authenticity that helps make procedurals compelling. Thus, Cognition feels more like Criminal Minds fanfic than a serious mystery. What isn't silly in the story is tired and contrived—the killer sends a message using an obscure toy just like one Rose coincidentally has sitting on her counter, cops never arrive on time even in the middle of downtown, and the killer ducks every bullet Erica (a crack shot) sends his way. 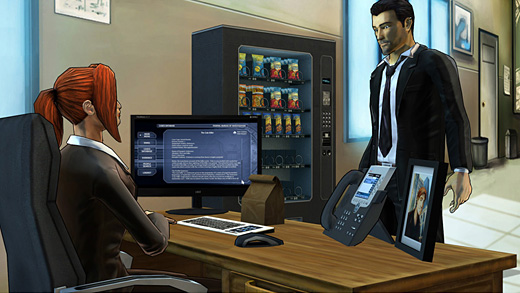 The tension procedural thrillers thrive on also dissipates because of the game's structure. An interrogation in the game's second act goes particularly awry as Erica must repeatedly leave the interview room to fetch things for the man she's questioning. At first she only needs to go downstairs for some food, but later she must go over to Rose's store to pick up some donuts (even though Boston has a Dunkin' every three blocks), then back there again for an extended psychic training session. The whole sequence is both absurd and fatal to the story's momentum, even though it involves two of the game's strongest emotional moments.

The animation also interferes with the game's attempts to build tension. Due to some limitation of either the engine or the programming, it seems like only one action can be animated at a time. This leads to jerky, discrete behaviors such as Erica walking up to the crime scene tape, stopping, lifting it, stopping, walking under it, stopping, releasing it, stopping, and walking forward again, only to stop once more while her partner goes through the same ordeal. In calm scenes this merely looks absurdly unnatural. At tense moments it's totally deflating.

It's unfortunate that Cognition suffers so badly from structural and storytelling issues, because when it stops being a story and starts being a game it actually works rather well. Interactions with objects in the world are generally smooth, and useful highlighting features make the occasionally busy screens relatively easy to parse. Inventory management is somewhat awkward, however, and a few sequences demand timing that's a bit too precise

Cognition's puzzles, though few, almost always feel like they belong in the world and make sense. In keeping with fictional traditions, the game's serial killers construct elaborate traps and trails of clues that Erica's ability to see an object's past helps her unravel. Her ability to see and repair a person's memory plays into the second act interrogation in an intellectually and emotionally satisfying way. Erica's powers fit the scenario very well, and solid implementation makes them easy to use appropriately.

Alas, the generally solid gameplay has been paired with a story that stumbles badly thanks to its tired premise, stock characters, and self-defeating structure. Cognition fails not from a lack of execution, but from a lack of imagination. Rating: 4.5 out of 10.


Disclosures: This game was obtained via publisher and reviewed on a home-built PC equipped with Intel i7 processor, 8 GB RAM, and a single Radeon 6800 HD-series graphics card, running 64-bit Windows 7. Approximately four hours of play was devoted to completing the game.

Parents: At press time, this game has not been rated by the ESRB. The game contains profanity, blood and gore, and violence. The game is about what you would expect given the "serial killer" plot. One villain gets burned alive. The heroine repeatedly hallucinates a graphic image of herself being shot in the head. I would rate this game "T."

Deaf, Hard of Hearing, or Colorblind: There are no essential sound cues in the game. One puzzle requires the player to correctly identify the color of a dress, but it can be solved by process of elimination. Blue and green color coding identifies spots what power will be used at a given spot, but as the correct ability will be used automatically no matter what this should not be a major impediment.