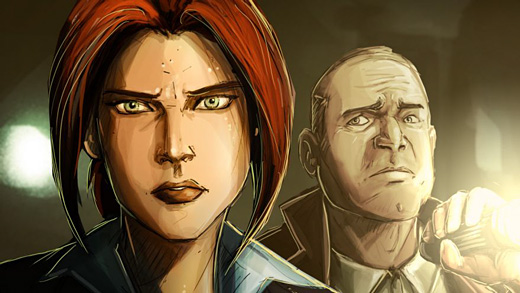 HIGH Solving the final phase of the round table puzzle.

LOW Every time Cain explains himself.

WTF I just happened to be carrying a caltrop in my pocket?

Every episode of Cognition, an adventure thriller starring psychic detective Erica Reed, has been a different experience. The first two chapters were citywide mysteries that put Erica on a murder case and then a high-stakes kidnapping. The claustrophobic third episode trapped her in a tower with a serial killer. Now in the finale, we finally get the showdown. Alas, this is one of the game's weaker chapters.

The Cain Killer starts off in trouble with flashbacks answering the least intriguing questions imaginable about the night Erica's brother was murdered, which was inevitable given that all the interesting issues were addressed in the previous episode. This is followed by an extended reconstruction of one of Erica's mentor's memories from the '70s. The puzzles here weren't bad and the implementation of Erica's memory-repairing power was solid. However, this prologue leans heavily on the characters Rose and the Cain Killer, both of whom are poorly acted, and the latter of whom was poorly written.

The Cain Killer is a critical weakness of the whole episode, especially notable because nearly all the other characters are written quite well. Even Erica's boss McAdams, who has been little more than a walking "uptight captain" trope for the whole game, gains a human dimension. However, the Cain Killer's mouth never opens without letting out something absurd, awkward or unbearably clichéd. The dialogue is sufficiently bad that it makes the serial killer whose actions have motivated the whole adventure seem silly, rather than threatening.

At least the game manages to bring some tension once it gets going. Unlike other episodes, The Cain Killer only rarely allows the player to move between screens. Instead, the plot hustles Erica along, dumping her into the right place to solve a few puzzles, then whisking her away to the next locale for more action. The structure felt perfect for the action-packed episode and produced some snappy pacing.

The puzzles themselves were quite good, particularly a suite of challenges in the serial killer's cabin. These incorporated nearly all of Erica's powers to see the past, and also used an ally's ability to see the future, in interesting and logical ways.

Even this late in the series, Erica gains one more power which allows her to see how much her conversation partners trust her. Although Cognition wasn't crying out for WRPG-style relationship mechanics, this wasn't a bad idea and fits with the idea of Erica's empathy. However, it feels superfluous in the context of this episode because in the few places where the power appears, it was trivially easy to get Erica's interlocutors where I wanted them. I would have valued this technique far more in her earlier investigations.

Cognition keeps on throwing new mechanics at the player until the last minute, concluding with a never-before-seen fistfighting minigame. Working through that by trial-and-error made the scene less tense than it could have been, and came across as a strange choice, especially considering that this chapter has an earlier confrontation that would have been ideal for introducing this gameplay.

Like the rest of the series, The Cain Killer is uneven. The main puzzle in the killer's cabin is one of Cognition's best, but the new mechanics introduced for the chapter are of indifferent quality at best. The writing manages to humanize all of the returning characters, but the killer's dialogue is a loss. On its own, I'm not sure I'd recommend this episode, but for those who have been keeping up with Erica Reed —a worthwhile pursuit given the qualities of Cognition's second and third episodes—The Cain Killer brings the series to a worthy and satisfying conclusion. Cognition's take on a psychic FBI agent is far from perfect, but worth investigating. Rating: 6.0 out of 10.


Disclosures: This game was obtained via publisher and reviewed on a home-built Windows 7 PC equipped with an i7 processor, 8 GB RAM, and a single Radeon 6800 HD-series graphics card. Approximately four hours of play was devoted to single-player modes and the game was completed.

Parents: As of press time this game has not been rated by the ESRB. The game contains intense violence and blood and gore. In one scene a character is depicted who has just suffered severe burns.

Deaf & Hard of Hearing: All significant dialogue is subtitled and there are no essential sound cues.