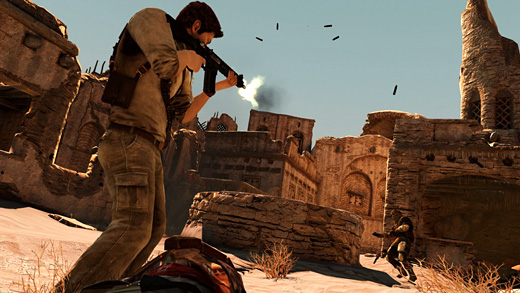 is with the difficulty set to "very easy". I say that even though I typically play games at "normal" difficulty, because I assume that the developers calibrated this to the experience they desired the average player to have. I only go up or down in difficulty for replay, and I rarely find that this change improves the experience. In the case of Uncharted 3 and some of its stylistic relatives, however, the situation is different. The goal of positioning the player as the hero of an action-style movie is at odds with making serious demands of him during play.

I don't mean to argue that movies generally make things easy for their protagonists. Dramas like Unforgiven, for instance, are more about how guns can miss or misfire than about actually how they can be shot well. In an action movie, however, the protagonist's challenge has far less to do with his aim than with the ratio between the number of bullets he has and the number of men he must shoot. An action hero generally misses only when he intends to miss, or on rare occasions where the bad shot can be used to comic effect, as when Britt was "aiming for the horse" in The Magnificent Seven. Of course these films handle the villains differently. The sure-handed hero can take many hits, while his enemies spray lead uselessly in all directions and go down if a bullet so much as grazes them.

In this respect, several often-criticized gameplay conventions actually serve the cinematic action aesthetic. Regenerating health and aim assist grant the player the resilience and skill of action heroes regardless of their own capabilities. The latter is an especially useful innovation in the context of consoles, where thumbsticks make aiming less intuitive and responsive. The objection that these methods amount to the game playing itself is entirely fair, but this doesn't amount to much of a criticism if the aesthetic intent is to maintain a consistent pace that supports narrative momentum.

In a cinematic action game, the player needs to keep moving forward because the intent of the game is to both tell a story and excite the player. Viewed as a question of design alone, difficulty that forces several replays of any section is undesirable because it gates progress and converts the game into a movie that is merely very inconvenient to watch. From an artistic standpoint, a player's failure in the sections he can control separates him from the protagonist. Gameplay that makes the player feel vulnerable and incompetent is at odds with the game's intention of positioning him as the hero of the action film. How can the player feel like he is the acrobatic, sure-shooting Nathan Drake if he can't hit the broad side of a barn and regularly plummets to his death?

In some respects, Uncharted 3 gets this right. The color accents that mark usable handholds cover most of the potential problems in the platforming. The player is rarely confused about what ledge to move to next, although the game occasionally fails to communicate the player's overall destination. Even then, aggressive checkpointing sometimes positions the player facing the correct direction to proceed. 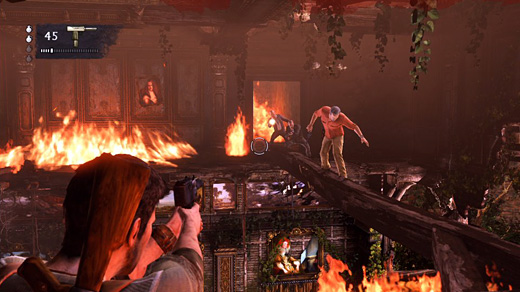 In the gunbattles, however, Uncharted 3 really falls apart. On the normal difficulty there is no aim assistance, and the targeting reticule moves extremely sluggishly. Even hitting immobile targets is something of a chore in this system, and foes often go on the run in order to try to flank or charge the player. Nearly all the enemies take multiple bullets to go down, and the resulting need to land a headshot amplifies the problems of the finicky aiming. A non-lethal shot won't even necessarily stagger an enemy, and this combined with their apparent fearlessness makes firing blindly from cover little more than a waste of bullets.

Needless to say, I found the gun battles to be a frustrating, unpleasant affair. Their difficulty was exacerbated by the large, open arenas where they took place, the aggressive flanking behavior of the huge number of enemies, and the general incompetence of the ally AI. The consistent experience of dying by point-blank shotgun blasts from armored foes I hadn't even seen as they maneuvered behind me, or being overwhelmed by waves of men who I couldn't track with the reticule or deter with blind fire, made me feel less like an action hero and more like a mildly overweight dude who's never even held a Kalashnikov. Even when I didn't die, the gunfights became long, tedious slogs, bogging down the pacing of the game. This problem became even more acute on the many occasions when I died repeatedly while trying to work out a way to survive its waves of enemies.

Turning the difficulty all the way down alleviates most of the problems. Aim assist returns, and most unarmored enemies will go down with a single hit, or at worst a three-round burst. As a result, the flanking behavior becomes more manageable despite the lack of choke points, and even the fights in bad conditions (on rolling ships or in sandstorms) become bearable. This makes the game feel more like playing an action hero, which after all would seem to be the goal.

The Uncharted games have always had a problem making their gunfights seem like part of the same universe as the cutscenes. Uncharted 3 has this problem even worse, as the sluggish, unpleasant shooting makes Drake into a relatively incompetent fighter rather than the excellent shot the movie portions imply him to be.

At a time when games like Demon's Souls and Super Meat Boy receive praise for their difficulty, it may seem perverse to insist that a game be easier, especially when its linearity has already earned it howls of derision from hardcore players. The critical question, however, is not how hard a game is, but whether the degree of difficulty serves its aesthetic. Because cinematic action games value story delivery and pacing, the gameplay ought to be primarily oriented towards helping the player take on the role of the character.

Easy shooting is therefore not always the right answer. In the case of the Uncharted games, though, high difficulty is the wrong choice. The inappropriately tuned gunplay of Uncharted 3: Drake's Deception

undercuts the game's characterization of Drake and interferes with its pacing. As such, it puts the gunfights in opposition to the cutscenes on both a design and narrative level, making Uncharted 3 worse as a movie/game than it would be as either one in isolation. Unless you play it on "very easy".

When playing the Bourne Identity game. On normal or hard it’s a fun, challenging action game. On easy, it’s a stellar cinematic action experience. If you’re playing as a character who’s exceptionally good at killing people, why should it feel like a chore?

It wasn’t until Batman that a developer truly figured out the fun that could be had from letting the player feel like they’re in charge even on the default difficulty level.

[quote=joe]Its an interesting topic. And one that many game makers deal with poor, and others dont even seem to think about. Many developers still put long cutscenes, in front of difficult parts of the game, that players have to repeat over and over. Is it good to make a player repeat something over and over, in a story driven game? Constantly repeating the same thing, is something that works in Geometry wars, but might not be right for a silent hill game. Instead of constantly killing the player, maybe they could make a new standard where your character is hurt… Read more »

Its an interesting topic. And one that many game makers deal with poor, and others dont even seem to think about. Many developers still put long cutscenes, in front of difficult parts of the game, that players have to repeat over and over. Is it good to make a player repeat something over and over, in a story driven game? Constantly repeating the same thing, is something that works in Geometry wars, but might not be right for a silent hill game. Instead of constantly killing the player, maybe they could make a new standard where your character is hurt… Read more »