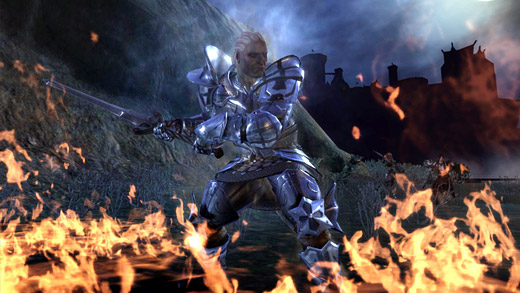 Last post, I mentioned that the tendency to choose segregation as a means to solve problems was a feature of many societies in the world of Dragon Age. Another, related motif appearing in many Thedan societies is the existence of a rigidly-defined social order in which a person's status and even his occupation are set at the moment of birth. To varying degrees this kind of social rigidity appears in almost every social group in the game (except the elves). Through its dialogue and plot, Dragon Age: Origins repudiates these systems, but in its mechanics it supports them.

The most obvious example of social rigidity in the game is the caste system of the dwarves of Orzammar, which assigns occupation and status to a person based on that of the same-gendered parent. Caste systems in general serve to stratify and divide society, but this one is notable for its lack of mobility. Even marriage and childbirth do not result in an individual's movement from one caste to another, although a low-caste woman may be adopted into a noble family if she gives birth to a noble's son. Otherwise, a dwarf's status and occupation is chosen for him by his birth.

In a somewhat ironic twist, the society of the qunari giants in many ways seems to resemble that of the dwarves. The game's main qunari character, Sten, is often reticent about his own past, but is happy to share his views on the appropriate role of women and other people who don't know their "place". To him, it is mystifying that farmers want to be merchants, merchants want to be warriors, and warriors want to be nobles. Moreover, he simply cannot process the idea of women who fight in battle, even though the game's most effective recruitable characters are all female. Qunari society is not explained in great detail, but Sten makes it evident that it is one of rigid divisions and roles.

The people of Ferelden also have a very stratified society, on the bottom of which reside the elves, who have been freed from slavery but not oppression. They are held in their position by ethnic violence—characters within the Denerim alienage point out that elves who move out often end up dead, their homes burned by humans. Above them is the bulk of humanity, and among the commoners it appears that upward mobility is at least possible, if not a regular occurrence. It is important to realize, though, that the human commoners also have a ceiling on their aspirations, for they will not become nobles. Teyrn Loghain is the exception that proves the rule—the breathless astonishment of the common soldiers for his elevation to nobility borders on disbelief. The treatment of his rise to power as a freakish occurrence speaks eloquently to the existence of a vast gulf between the two tiers of human society.

The game actually seems quite ambivalent about the social rigidity repeated throughout Thedas. In its fundamental structure, the story argues against strict stratification—the social and economic positions of the various origins are quite diverse, but they all end up in the same honored place as a mighty gray warden. Sten's views on social and gender roles are easily punctured by a female protagonist, and mercilessly mocked by Morrigan whenever she gets a chance. On several occasions it is made clear that the dwarven caste system is slowly killing the culture that gave birth to it. From all this it would seem that this game, like the culture from which it emerged, explicitly rejects the validity of rigid social divisions.

The mechanics of the game, however, buy into the qunari ideals because Dragon Age features firm class boundaries and rigid character builds. A character cannot mix the skills of a mage and a warrior or rogue, and a warrior-archer cannot adopt the Ranger specialization reserved for rogues. A character chooses an occupation and is then locked into it and can never become anything different. He cannot even become a different type of his own character class. A player who fully develops a rogue archer and finds he does not like the build has no option for addressing his mistake other than replaying the game entirely because there is no way to re-spec.

The character's real "birth" into the game world occurs when the player designs him, choosing an origin and a class. From this moment forward, his occupation is set. If the player later finds himself unhappy with his character's lot, there is no remedy but to start over with a new "life". In this respect, the mechanics of the game resemble the defined and restrictive social systems that appear so frequently in its world. Although many of the characters praise the idea of breaking the mold, and the game itself appears to argue against institutions like the dwarven caste system, any such message is undercut by the practical reality that the game actually employs such a system itself.

I wouldn’t say that the class system is poor; it’s a perfectly normal design for a Western RPG. It just interacts oddly with the kind of message the game seems to be trying to send through more traditional storytelling techniques. The Wardens routinely puncture class and racial barriers in the stories of Origins, but then the game stuffs the player into this hierarchical system that offers little recourse if he’s unhappy with his lot. By giving you two of each class in your party, BioWare is allowing you some space to experiment with builds so that you don’t have to… Read more »

A thoroughly enjoyable read. I suppose you’re born into the world as a player, and while you may come across much resistance to the world’s rigidity, you’re not immune to it yourself. Other than that, it sounds like a poor class system that doesn’t players the freedom they need to play to their personal tastes.