Marching Back and Forth 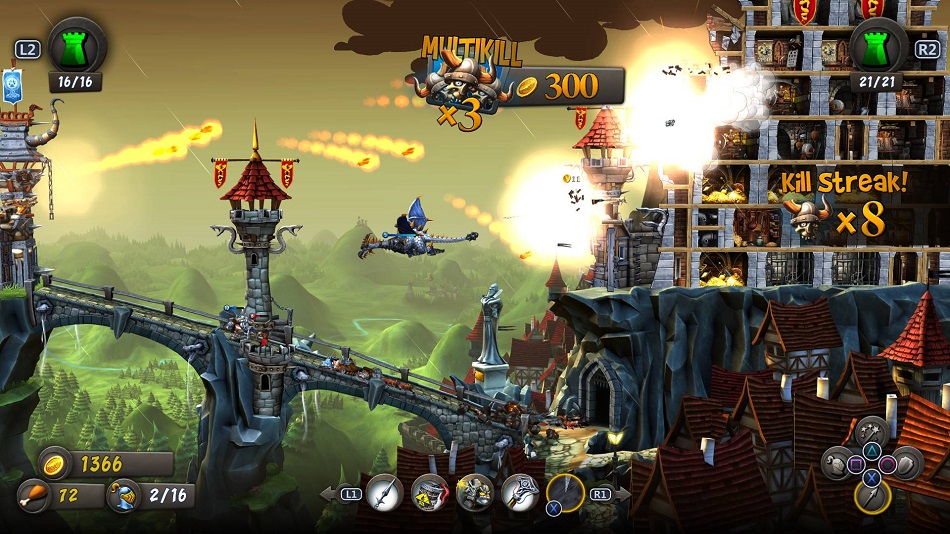 HIGH Nailing a dragon with an explosive shot and then destroying its lair with a rock shot.

LOW Defeating a huge wave of high-level enemies, then watching a dozen max-level trolls emerge from the enemy gate.

One of the great disappointments in 2014’s roster of games has been the spate of remasters and reissues of last-gen material. In the case of AAA games this has felt like a streak of cash-ins; a way to scrape some money from release-starved PS4 and XBO owners without putting up a big investment. On the other hand, it’s also given some opportunities to rediscover gems that were passed over at the time of their initial release. CastleStorm: Definitive Edition, incorporating the original game and its DLC campaigns, is almost such a game.

The title remains essentially as Brad described it in his initial review. In most combat sequences, there are two castles on either side of an essentially linear battlefield. The typical goal is to destroy the other castle or break down its gate, steal its flag, and bring it back to base.

The player can generate troops out of her castle to fight the stream of enemies emerging from the opposing one, or launch various projectiles from a ballista, Angry Birds-style, at the enemy castle or troops. These range from the sensible (javelins, explosives) to the absurd (flatulent boars). While simply flinging objects willy-nilly across the field can be helpful, precision aiming is more useful because destroying particular rooms in a castle can eliminate the opposing player’s ability to summon certain troops or use room-based advantages. The player can also cast spells that injure enemy troops or protect her own.

Players can also summon a hero, which turns the game into something of a 2D brawler. Heroes have melee, ranged, and charged attacks, but all of these seem to execute a little sluggishly and movement feels a bit floaty. With the hero on the screen, the player has a lot of additional offensive power, but no way to summon troops or fire projectiles, and the hero cannot interact with either flag.

All these disparate elements end up being a little simplistic. CastleStorm isn’t compelling as a brawler, and the elementary resource management of building units and choosing upgrades has few interesting dynamics. The ballista doesn’t quite feel like a polished and refined design. When all the balls are in the air at once, though, the process of selecting and applying all these different tools produces some satisfying dynamics.

CastleStorm very rarely settles down and just lets a battle play out, however; instead, it constantly streams gimmicks. In some battles the player can only control the hero, in some the ballista doesn’t work, in others no troops are available or there’s no enemy castle that can be attacked. Stripping away components like this tends to expose the limitations of the mechanics that remain. Worse, the game doesn’t clearly communicate what kind of handicaps will be present in a particular fight until after it starts, by which point the player must have already committed to upgrades and selected what units, projectiles, and spells she will use.

This inconvenience is exacerbated by CastleStorm‘s uneven difficulty. The original two campaigns have several difficulty spikes, usually associated with the gimmicks. Losing a battle doesn’t get the player anything, so if she made the wrong choices in terms of what to upgrade beforehand, the only way to earn enough money to correct that mistake is to go back and replay previous fights or grind skirmish scenarios. Fortunately it’s also possible for the player to lower the difficulty of any battle in the campaign, which can sometimes compensate for those mistakes.

That’s a real godsend in the second pair of campaigns, originally released as DLC. These two campaigns are seriously unbalanced and out of synch with the difficulty of previous chapters. Even on the “casual” setting, these battles will happily stream dozens of max-level enemies onto the field, a form of challenge so tedious and uninteresting that I almost bailed on them entirely.

A contributor to that choice was how dull the game had become. Despite its constant flow of gimmicks, CastleStorm gets stuck in a rut, since every one of its four campaigns follows the same pattern and the levels all have essentially identical terrain. That gets a little tedious in the second campaign, where the new rooms earned have equivalent functions and the spells, units, and projectiles are just barely different enough to keep things interesting. By the third and fourth campaigns (where the units are simply gussied-up versions of ones already seen) the game really starts to drag.

Still, when it lays off the screwballs and offers a straight-up fight, CastleStorm: Definitive Edition is solidly entertaining. The combination of stripped-down strategy game and physics puzzler (with a dash of a brawler thrown in for spice) works well when all the elements are in play. When CastleStorm leans exclusively on any one of them, however, their individual limitations show through all too clearly. Rating: 7.0 out of 10

Disclosures: This game was obtained via publisher and reviewed on the PS4. Approximately x hours of play was devoted to single-player modes (the game was not completed) and 0 hours of play in multiplayer modes.

Parents: According to the ESRB, this game contains blood and violence. That’s true enough, but the presentation overall is so goofy and non-threatening that I don’t see its being a problem. The game has some slightly raunchy humor in the form of fart jokes that will delight 10-year-olds, for whom this game is, in my opinion, appropriate.

Deaf & Hard of Hearing: Dialogue in story scenes is accompanied by or solely is text. In combat an announcer makes some useful reports that do not always come with clear visual alerts, although the relevant information can eventually be found somewhere on the screen. The result is a mild uptick in difficulty, if anything.