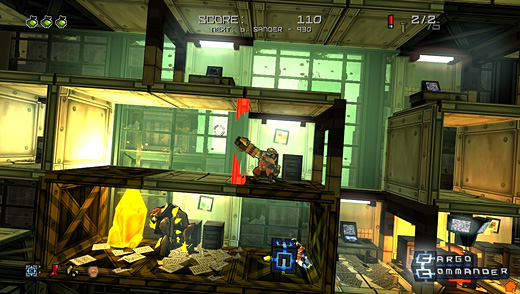 HIGH Snagging a sector pass from a complicated container just as the wormhole starts to pull it apart.

LOW A sector pass container full of explosive enemies and no path around.

WTF Occasionally a crystal in a one-block room will spawn a bunch of large enemies, leading to a clown-car-like effect. Trust me, you do not want to drill that room open.

Once upon a time the Earth had only one satellite. Now it has millions, most of them smaller than a coin. Our planet has gathered a relatively thick shell of debris after only a few decades of space travel, so it stands to reason that further into the future we'll have made an even bigger mess out in the stars. This is the reality of Cargo Commander, examined through the everyday drudgery of an interstellar garbageman.

Cargo Commander's main mode follows a day in the life of its protagonist, a burly fellow hired to retrieve bits of cargo from abandoned containers in space. Activating the magnet on his ship draws the containers in so that he can board and explore them for a while before they get swallowed up by a wormhole. To make this task simpler, the protagonist can travel through space for brief periods and drill through most bulkheads, allowing him to bypass enemies or even whole containers.

Containers seem to have 0-4 pieces of cargo and varying numbers of monsters spawning from crystals. Although there is a bit of variety in shape and size, virtually all enemies use the same swarming tactics. Their size serves mainly as a signpost to indicate how far these bullet-sponges outclass the player's firepower; in a tactical sense, evading enemies is almost always the correct thing to do.

Most enemies are mutated former employees of the protagonist's company, and by collecting their hats the protagonist can upgrade his spacesuit and weapons. As the player attracts wave after wave of cargo containers, the enemies become more numerous and difficult, and the array of containers more extensive and complex. Each level also has a single container, usually especially (sometimes excessively) challenging, containing a "sector pass" allowing the player to move on to a new level. 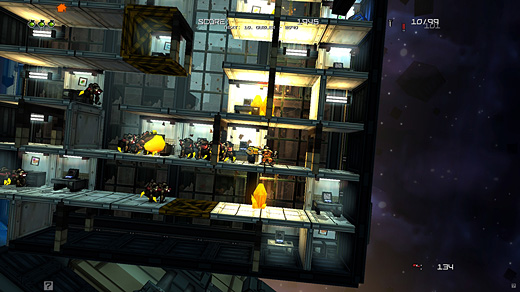 Death simply means respawning back at the home base and having to start the sector's sequence all over again, which means repeating the exact same sequence of containers. The structure of each level is generated from its name, but is completely determined rather than random. This means that if the player has trouble getting the sector pass, things can get irritatingly repetitive.

Dying or ending a day normally resets the protagonist—he loses all his upgrades and weapons. This gives Cargo Commander some of the feel of a roguelike, an impression that only grows stronger in the "Journey" mode. Here, the home base is immediately smashed at the start of the level, and the player must make his way through an accreting mass of containers as they slam together in space. Only 5-6 containers are ever stuck together at a time, and the player can only score if he finds the right kind of console tucked away in the mass of debris.

The absence of a safe home base in Journey mode creates a strategic tension that's lacking in the main game. Cargo Commander needs that, because in its absence the game feels rather like a chore. Each sector presents the exact same challenge over and over, without even a real soundtrack to spice things up. The player can only carry two weapons, and the repertoire of armaments and upgrades is limited. Each level only has six kinds of cargo, and since the game's persistent progression depends on how many different kinds of cargo the player finds, not the amount, it's easy to get stuck in a rut while trying to work out how to get a challenging sector pass and escape to a more interesting place.

's main mode. The more classical roguelike construction of Journey adds much-needed tension while eliminating certain petty annoyances like the sector pass. However, the game's limitations mean that even this mode can become repetitive and dull. With its limited customization, uniform enemy AI, and ineffectual weapons, Cargo Commander tightly constrains the player's tactical and strategic options, no matter the mode. The game may be set in deep space, but Cargo Commander's gameplay feels like it's trapped in a box. Rating: 5.5 out of 10.


Disclosures: This game was obtained via publisher and reviewed on a home-built PC equipped with an untweaked Intel i7 processor, 8 GB RAM, and a single Radeon 6800-series graphics card. Approximately eight hours of play was devoted to single-player modes.

Parents: At press time, this game has not been rated by the ESRB. The game contains cartoon violence and foul language. Some foul language is voluntary (using the F key), but objectionable words can also show up in the list of sectors available. Based on some experiments, I believe the list of available sectors is at least occasionally curated, but offensive sector names can still be found.

Deaf & Hard of Hearing: The opening of a wormhole sets off an alarm siren, but this is complemented by flashing red lights in containers that are about to be pulled away. Insensitive hearing should not cause any serious problem.