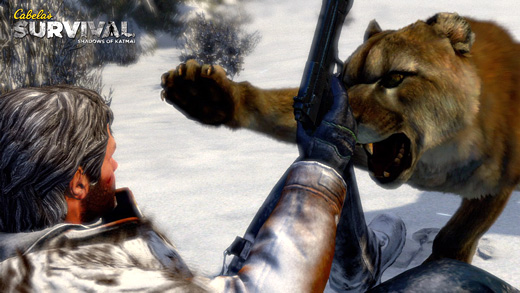 LOW The heat-vision bonus in the shooting galleries is awful.

WTF Colbert was right: the number one threat to America is bears.

In one of the most telling incidents of a previous election year, John Kerry went into an Ohio cornfield in an effort to garner favor with the electorate by killing some geese. He hoped to appeal to the sort of person who shops at Cabela's, a retailer of guns and other sporting goods for the American hunter. To gamers, Cabela's is better known for a line of fairly successful hunting titles, often sold along side lightgun controllers. Cabela's Survival: Shadows of Katmai

is their attempt to step into the cinematic action genre, fusing open-air gunplay with environmental traversals after the fashion of the Uncharted games. Perhaps unintentionally, the game portrays a hero and adventure precisely appropriate for the people Kerry failed to reach.

Of course, Katmai's exemplar of red-state masculine virtue can't be some metrosexual Indiana Jones clone, so Fun Labs supplies Logan James, a rugged, bearded fellow who comes across as a fusion of Jeremiah Johnson and James Braddock. Able to shoot birds out of the air with a handgun while dangling from a cliff and clear vast chasms in a single, Tick-like leap, Logan is just one arthritic roundhouse kick away from a full-on Chuck Norris homage.

Critically, Logan neither possesses nor needs any knowledge that would help him in his predicament. He spent one summer in scout camp, but can still start a fire with flint and steel. He is ignorant of how to command a dog team, but can still pilot a sled around unfamiliar terrain perfectly. Despite not having hunted since he was a kid, he successfully bags moose and elk in the middle of a blizzard. Logan's success at hunting and mountaineering in the face of his own towering ignorance marks him as the avatar of a society that does not value specialized knowledge or experience except when it's ideologically convenient.

Attentive players may wonder why a man who hasn't hunted since childhood carries a scoped rifle in his airplane. Logan answers this objection himself, exulting "Thank God for the Second Amendment!" when he pulls the weapon from the snowy wreckage. Katmai is meant for an audience that perceives gun ownership as a worthy end in itself: Logan James owns a scoped rifle he has no practical use for because real men own guns. 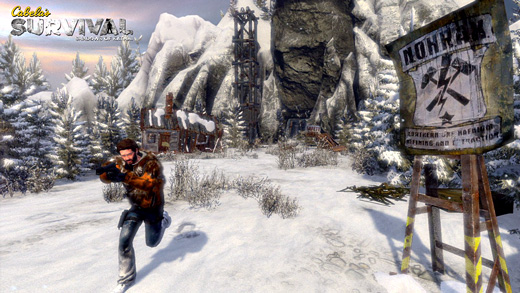 Fun Labs seem not to have any more acquaintance with actual hunting than Logan himself. A player seeking an arctic hunting simulation would be better off playing Skyrim, for Katmai has no concept of stalking prey beyond a leaping traversal of cliff faces covered in suspiciously neat horizontal ledges. This is not the sort of game that considers the challenges faced by a 200 pound man trying to transport and butcher an 800 pound moose on the side of a mountain. Nor, once the beast has been moved, does the game have any patience for the practical difficulties or potential dangers of stuffing a woman inside it to keep her warm.

This carelessness in the story's concepts actually fits quite well with Katmai's shooting gallery modes, where the player romps on rails through a forest, depopulating it of all its furred and feathered denizens. As the electric guitars thrum in the background and the obnoxious announcer criticizes the player for killing a wolf with a shotgun (use the rifle for big game!), an inner truth is revealed. Despite the outdoor-store branding and the game's insistence that the player has "hunted" animals, Katmai isn't about hunting at all. In every phase, this is a game about shooting, built to sell the player the joy of using a gun.

Given this, it should be no surprise that Katmai feels designed for a Cabela's lightgun (or possibly the Wii), rather than a gamepad. The inflexible controller scheme ignores many conventions for no apparent reason, and makes the game feel more difficult to handle than it should be. One might also take this as incompetence, especially given the minor technical issues crop up throughout. Most gallingly, the slow-motion zoom-in shots sometimes forget the slow-motion part, leading to a quick death at the paws of an angry bear. Considering these hiccups and the sometimes-rough graphics, Shadows of Katmai comes across as a firmly "B"-tier game, more Missing in Action than Rambo II.

Despite this, much of the game is a joy to play, providing more than its share of simple, disposable fun. Moreover, Cabela's Survival: Shadows of Katmai

nails the spirit of its protagonist and the atmosphere of the adventure. Although its scenario is silly and many of its incidents are ridiculous, the game succeeds because it never takes itself very seriously. If only the social forces that shaped it could be so readily disregarded. Rating: 7.0 out of 10.


Disclosures: This game was obtained via retail store and reviewed on the Xbox 360 using a normal controller (rather than Cabela's light gun). Approximately 5 hours of play was devoted to single-player modes (completed 1 times) and 0 hours of play in multiplayer modes.

Parents: According to the ESRB, this game contains blood and violence. Look, in this game you're going to be shooting a lot of animals, some of them potentially endangered. Also, you're going to be stuffing a woman into a moose, no two ways about it. There are the requisite splashes of blood, but it all comes off rather silly. Do not take anything that happens in this game as survival advice.

Deaf & Hard of Hearing: The game has no significant sound cues, but absolutely none of the dialogue is subtitled, not even the journal entries the player can find scattered all over the mountain. The voiceover in the shooting galleries is also not subtitled, though this is something of a mercy.

I agree with the commenter above. You need to play with the light gun, it really adds to the silliness factor and makes something really fun even more so. Some people are really missing out.

Glad to see someone else enjoy this game for what it is. It seems all of the Cabela games are like that, simple arcadey takes on shooting, hunting and all that. People who review it tend to approach it wrong and wind up disappointed.

One thing though, you need to play with the gun. It’s the authentic experience. 🙂