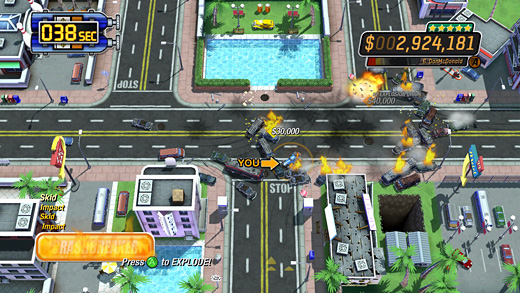 HIGH When the final explosion in Rush Hour mode causes a chain reaction that demolishes everything on the screen.

LOW Reaching the end of a Pile Up with a full 5x multiplier and dying immediately due to being out of position.

When my brother and I were kids, one of our favorite games was to smash our Hot Wheels and Matchbox cars into things. We'd run them into our action figures. We'd set up tournaments and smash them into each other. We'd make little buildings out of Jenga blocks and crash the cars into them to knock them over. Our parents even got us the special cars with panels that flipped over to mimic crash damage, which we used so frequently the springs wore out. Decades later, I still remember the simple joy of smashing toy cars into one another, and judging by Burnout Crash!

, Criterion Games does, too.

The goal of Crash! is to do as much damage to the vehicles on the road and their surroundings as possible. The player drives a car into an intersection to cause an initial wreck. After this there's not much driving to speak of, but the player can cause a number of small explosions that damage passing traffic. These "Crashbreaker" blasts, which charge up more quickly based on how much damage is occurring in the intersection, also launch the car into the air where it can be steered.

The limited mobility turns Crash! into more of a puzzle game than a driving game, particularly in the two modes that penalize the player for letting cars escape the intersection. While a good bit of traffic can be blocked simply by making a pileup in the middle of the road, cars that are turning can be difficult to catch. Moreover, the progressive damage of multiple collisions will cause wrecked vehicles to smoke and eventually explode. This will send parts of the roadblock flying, forcing the player to block the intersection himself again.

In principle this could be horrific, but the action is presented in a very tongue-in-cheek manner. The main mode, "Road Trip", lays this on thickly, with silly radio announcements and the appearance of destructive forces like a UFO and a lobster monster. These attacks vary in power based on how many cars escaped the intersection, and the mode ends if the player lets five cars escape. The other modes vary in their emphasis on hitting all the traffic, but the basic goal of causing maximum destruction doesn't change.

The player's success in each intersection is gauged by stars. Five stars are available in each mode for each intersection and three of them are always related to the damage done (in dollars). The remaining two stars are given out for various skilled kinds of play, ranging from destroying a couple of particular objects to reaching the end of a mode without letting any cars through. Because progress through the intersections is gated by how many stars the player has received, there's a strong incentive to replay modes in order to get as many stars as possible.

The challenge with an idea as simple as this is to keep it fresh, and here Crash! stumbles a bit. While some layouts are more challenging than others, the intersections aren't really all that different, and the kinds of traffic encountered feel rather samey throughout. While the player can alter the game by choosing vehicles that fly farther or have more powerful explosions, these options don't have a significant effect on gameplay. With action that never gets shaken up much, this game isn't likely to grow on a player who initially dislikes it.

That said, a player who enjoys the concept of wrecking toy cars will get a lot of mileage out of Burnout Crash!

The quest to gain more stars develops its own compulsion after a while, and competition with friends through Criterion's returning Autolog feature helps stimulate the quest to achieve more destruction despite the curious lack of global leaderboards. From its simple premise Crash! delivers plenty of fun to reproduce a simple childhood joy. Rating: 8.5 out of 10.


Disclosures: This game was obtained via retail purchase and reviewed on the Xbox 360. Approximately 7 hours of play was devoted to the single-player, and all modes were tried on all intersections.

Parents: According to the ESRB, this game contains cartoon violence. The car crashes aren't presented in a realistic way and the violence isn't graphic. However, the destruction is on a pretty big scale that might disturb some parents.

Deaf & Hard of Hearing: There's no dialogue to speak of, and the onscreen text explains pretty much everything. Certain sound cues, though not strictly necessary, are extremely helpful given how busy the screen can get.