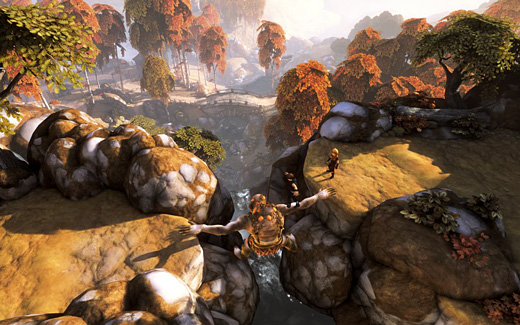 HIGH In the water, pulling the left trigger.

Several years ago Chris Bateman argued that game mechanics can't make a player cry. Narrative components can, of course—even the Gears of War series managed at least one weepy cut-scene—but excluding tears of frustrated rage, the argument went, mechanics simply lack the capacity to produce catharsis. Although I didn't agree, Bateman made a strong argument, now rebutted by Brothers: A Tale of Two Sons.

Part of the reason Brothers can communicate emotion through its mechanics is that it makes them the core of the experience. As Brad discussed in his review, Brothers does away with traditional methods of storytelling like dialogue and text. While characters speak, the language is unintelligible, and the meaning of their words must be inferred from intonation, body language, and camera motion. Because this is done so well (despite limited facial expressiveness) the content of a conversation is never in doubt, even if the speakers cannot be directly understood.

Something similar happens with the world itself. Although the games are extremely different, Skyrim serves as a reasonable reference point for the breadth of environments the boys encounter on their quest to find medicine for their sick father. The protagonists pass through mechanized mines, snowy mountains, battlefields full of dead giants, and a village surrounded by disturbing snowmen.

These places speak to a richly conceived fantasy world, but while Bethesda simply can't stop strewing scraps of writing and books of lore everywhere despite its reputation for environmental storytelling, Starbreeze is content to let the locales speak for themselves. This puts the focus on the present—what matters in Brothers is not how these places came to be, but what the player is doing there.

Another key to the design is the game's minimalist interface. The player controls both brothers simultaneously (a controller is required, and essential to the experience) using only the thumbsticks and triggers. The left commands the older boy, who is larger, stronger, and heavier, while the right side controls his younger brother. In general, the sticks guide motion while the triggers serve as an all-purpose "use" key.

This is important because it makes the import of the keystroke ambiguous and general. The right trigger doesn't stand for making the little brother grab things, or talk, or throw something. It just stands for the little brother doing. Positioning the triggers as representing abstract physical action makes them amorphous enough to expand their meaning in new directions later in the game.

I'm not going to claim that Brothers conveys all its emotional content solely through mechanics—I doubt any game can. Brothers has its tear-jerking cut-scenes, its haunting dream sequences, its wistful flashbacks. These are, however, matched by mechanical flourishes like the brothers' reluctance to get too far from one another, or the way the boys' motion changes in critical episodes. Moreover, the game's most powerful moment comes from the way one trigger's meaning expands near the end.

The triumph of Brothers is that it can convey a deep emotion solely through the player's interaction with the system. There is no visual explanation, no prompt to "press X for fraternal affection." There is only a button press that has come to mean something, and a situation in which that meaning is transformed into a rich and moving sentiment. This is what games can do. This is what games should be. Rating: 10 out of 10.


Disclosures: This game was obtained via retail purchase and reviewed on a home-built Windows 7 PC equipped with an i7 processor, 8 GB RAM, and a single Radeon 6800 HD-series video card. Approximately three hours of play was devoted to single-player modes and the game was completed.

Parents: According to the ESRB, this game contains blood, crude humor, and violence. There is also at least one alcohol reference. Although the game seems lighthearted and whimsical near the beginning, it becomes rather grim, with several wrenching deaths. Children under the recommended age should only play with parental supervision.

Deaf & Hard of Hearing: Although the characters speak, it's not in English so you won't miss much. There aren't really any sound cues or critical color distinctions.

I loved this game.

Probably not knowing too much what the game was about added more to the catharsis.

Many thanks to both Brad and Sparky for the glowing reviews 🙂

Sounds like it’s just as good as Ico when it comes to conveying emotions and narrative via mechanics. Wonderful, sounds like a must buy.

Two glowing reviews, but after trying the demo, I can’t shake my unease about the game. Precisely because I never know what the interaction is going to be : so my experience is often trying each boy on whatever appears to be interactive in the environment, which is quite damaging to the pacing. There are some puzzles which requires the use of these interactions to progress, beyond discovering what those interactions are, but so far there wasn’t any challenge to speak of.
I’m afraid the mechanics are never going to get much more elaborate.

Well IMO, Sparky and I are two of the harshest critics on the ‘net, and like you said… two glowing reviews.

For sure in the early parts of the game you have to do a little experimenting to figure out what’s going to happen. Once I got used to the boys’ different abilities, though, using them correctly became second nature. As for whether the mechanics become more elaborate – the game riffs on the use of the pair in interesting ways, but it’s not a hard-core puzzler or anything like that. I found it inventive and entertaining, but most of the challenge lies in wrapping your brain around controlling two characters simultaneously.

Hi, I finally bought and played the game based on your reviews and comments, and here’s my opinion nobody ever asked :p The interactions did indeed become self explanatory after the first few ones in the village, which serve to establish the sons’ characters. They were inventive and entertaining throughout, if a bit too obvious, and the world was beautiful. But everything felt too manufactured and too abstract at the same time. The journey through the mines for example was too gamey to make the world believable, even though the game tries to hint at a larger context with ogres… Read more »