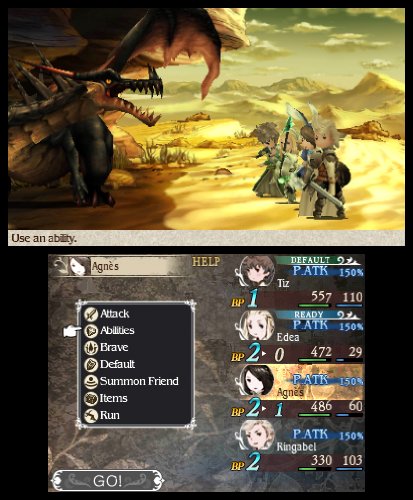 HIGH The way the game integrates its social aspects into the final boss fight.

LOW The four chapters leading up to that boss fight.

WTF Every time the smooth jazz started up after a special attack.

Although the genre has been declared dead as often and emphatically as the Adventure game, the early months of 2014 are re-establishing that Japanese Role-Playing Games (JRPGs) are still relevant, if not as well-loved as they used to be.

HD re-releases and new high-profile entries have shown that the genre's old ideas still have value, and that there are plenty of ways to deal with its weaknesses. Bravely Default

tries to prove both, taking classic hallmarks of the Final Fantasy series and adding tweaks to make itself more accessible and palatable, but it's not a complete success—Bravely Default gives its old JRPG mechanics a fresh coat of paint, but that's not enough to disguise the cracks in the walls.

The mechanical innovation that gives the game its name is a renovation of the "defend" command that has languished, all but ignored, in the command list of turn-based RPGs from time immemorial. A character that "defaults" takes less damage, but also gains an extra action to be used on a later turn. The player can also opt for a character to "brave" and perform up to three additional actions in a single turn. If she's saved some up by defaulting previously then those get used, but otherwise the character will be unable to attack or defend until enough turns have passed to give her another action.

In extended battles against bosses, the brave/default system adds an interesting layer of strategic turn manipulation, particularly in conjunction with buffs and debuffs. In the field, however, going brave was little more than a convenient way to end dull battles quickly without taking damage.

This is a shame, because boring, all-but-meaningless fights consume most of Bravely Default's running time. It hews closely to the well-worn structure of a classic JRPG: cross the overworld to reach the dungeon, penetrate the dungeon to confront the boss, destroy the boss to open up the next bit of story. The game sheds this structure in its second half, only to replace it with an even more stultifying tour of dungeons already delved and bosses already beaten.

Bravely Default makes efforts to compensate for its deficiencies. It allows the player to change the game's difficulty mid-stream, to let the characters autopilot their way through battle, and to alter the frequency of random encounters—all the way down to zero—using a slider.

Though they're very welcome, these affordances merely cover up the problems with the core design rather than correcting them. The encounter slider sidesteps the occurrence of grinding but does nothing to eliminate the need for it. Rather than taking steps to make grinding interesting, as Shin Megami Tensei IV did, Bravely Default's auto-battle masks the dullness of its random encounters by allowing the player to disengage from them. The ability to adjust the difficulty on the fly makes the absurd padding of the game's back half bearable, but it's no replacement for actually trimming the fat.

The player can provide some much-needed tactical variety by experimenting with the job system (one of the clear signs of its Final Fantasy roots) but this felt a little too constrained. Each character can only access commands from two jobs in battle, and Bravely Default tightly limits the use of passive skills. As a result, any effort to level more than three or four jobs on a given character ends up being a waste, especially given the massive jump in time investment needed to move past level 9, and that a few jobs on the overstuffed menu aren't worth leveling at all.

Another of the game's issues is that the story can't sustain its playtime. Bravely Default's four party members rarely show as many as two dimensions. While the dialogue occasionally wrings a few laughs out of their small number of defining characteristics, it's not strong enough to lend their stories pathos even when their souls are shaken to the core. It must also be said that the cutesy 3D characters are a poor aesthetic fit for both the emotional moments of the story, and the hand-painted look of the game's better environments.

This troupe of characters gets dragged around a game world on a (sigh) quest to awaken four mystic crystals. Bravely Default has the decency to add a twist to that idea, but it takes far too long to develop and execute, and relies far too heavily on the adventure's boring second half. The game is also a maddening exercise in the classic idiot plot, defined almost entirely by the repetition of a scenario in which one person knows something another person needs to know and chooses not to tell it for no other reason than that doing so would collapse the story in an instant.

That said, near its end Bravely Default manages to combine its storyline with some of its peripheral mechanics in a pleasing way. Through its save menu, Bravely Default allows the player to connect with others via friend codes, streetpass, or random invites. Linking to them allows the player to use some of their abilities (for instance, jobs the player hasn't yet leveled up) and attacks, and it helps with a light town-building simulation that grants access to advanced items and equipment. Those social mechanics linger at the periphery for most of the game's runtime but get incorporated into the story's ideas late, and lend the finale much of its emotional weight.

That play on the idea of connection helps cover up the fact that the characters bring too little to the final battle on their own, which is par for the course in Bravely Default

. It's a well-made, clever game that spruces up its standard genre mechanics and story with smartly-chosen twists and additions. However, these are cosmetic corrections to issues that require structural repair. It's got a lovely fresh coat of paint, but underneath that Bravely Default is the same old thing. Rating: 7 out of 10


Disclosures: This game was obtained via retail purchase and reviewed on a 3DS XL. Approximately 60 hours of play was devoted to single-player mode and the game was completed.

Parents: According to the ESRB, this game contains fantasy violence, mild blood, mild suggestive themes, and use of alcohol. Although the game includes several strong female characters its surprisingly sexist at several points, including one section that trades on the idea that women are so vain they will murder their gods to look prettier. Some (female) outfits used in the game are a bit scanty, and there is a potentially triggering segment where a provocatively-dressed female party member is drugged and kidnapped by a Lothario-like NPC.

Deaf & Hard of Hearing: All dialogue is subtitled and there are no important sound cues. The screen flashes occasionally.