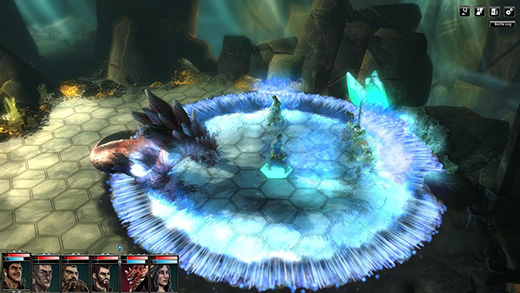 HIGH Realizing at the beginning of the fourth chapter what I'd actually been doing.

WTF My nimble hunter slips and falls every time she tries to cross a puddle, but nobody, not even the dwarf, stumbles while trying to run through a knee-deep swamp?

What if, instead of a Chosen One, the world could only be saved by a hero nobody would choose? That's the premise of Blackguards

, a game where the core characters are defined more by their vices than their heroism. It's an interesting idea, but neither the story nor the mechanics allow it to fulfill its promise.

Blackguards is based on The Dark Eye, a pen-and-paper role-playing system and setting popular in Germany. Characters have several base attributes (e.g. strength, charisma, agility), as well as talents (weapons and spells, etc.) and special abilities. Special abilities can be unlocked, and the other abilities upgraded, using "Adventure Points" (AP) that are doled out for completing quests or winning battles, though the AP yield and difficulty seem to be uncorrelated.

Combat takes place on a hex grid, strategy-RPG style, and is strictly turn-based. I generally enjoyed the system in a straight fight, although I felt the balance was off in some respects since knowing which talents and attributes to upgrade and when is vitally important to making Blackguards even remotely playable, but the game does a poor job of explaining it. For instance, failing to immediately dump AP into a character's primary weapon skill will result in enemies endlessly and effortlessly dodging his attacks.

The game also includes a huge number of traps, but this system was almost entirely useless because there were very few battles where enemies couldn't reach my party on the first turn. Because the world is a series of combat arenas strung out as nodes on a line, rather than a continuous field, it's also impossible to prep a killzone before a fight and lure enemies into it. Less glaringly, mages seemed to be at an intrinsic disadvantage to highly-skilled mundane assailants, and bashing weapons appeared to be overpowered relative to slashing or piercing types.

Unfortunately, straight fights were often in short supply, as Blackguards shakes things up so frequently that it never establishes a real baseline. It's always popping up skirmishes against endless streams of enemies, or several melees in a row without a break to heal, or battles where a crystal on the other side of the map heals all enemies every turn, or a fight where a gorilla must be caged. Yes, it also includes an ill-conceived stealth section. In moderation these encounters might have been a refreshing change of pace, but in such frequency they only added a kind of plodding, try-it-again difficulty that suggested the developers took the wrong lessons from Dark Souls.

The user interface in combat is also a bit of a problem; the camera defaults to a position that does more to show off the environment than the tactical situation. It's a minor annoyance that grows from having to correct it constantly. Hex grids can be difficult to read, and I found it particularly tough to get a good feel for line-of-sight (important for ranged attacks and spells), which could and should have been conveyed somehow in the UI. Blackguards was also inconsistent about showing the likelihood that a particular attack would land, which is a problem because it obscures how the system works. In Blackguards, upgrading a character is not about doing more damage per se, but about increasing the certainty that a player's choices will have the results she expects.

The character and equipment menus are also problematic. Equipment can’t be sorted in more than the roughest of ways, making inventory management a chore. The poor design of the shop page makes it needlessly difficult to compare potential purchases against current equipment, and the loot menu simply doesn't allow it at all. Similarly, the character sheet makes it tough to see the benefit of upgrading spells and talents.

All of these factors contribute to the progression systems feeling like a disappointment. The variety of gear available is depressingly thin, and high prices and a general lack of plunder (how many guys do I have to kill before one of them drops a belt?) discourage experimentation. My mages made it through more than half of the game without changing outfits, simply because nothing suitable was available, and one kept the same weapon for nearly as long.

This threadbare feeling extends to the world and story as well. As mentioned, the game is a series of nodes where combat happens (not a continuous world) so there's no real landscape to take in. What the player does get to see is mostly a set of generic medieval-ish towns that I would be hard-pressed to distinguish on second viewing. Blackguards never develops a sense of place or atmosphere, which is a problem since the core of its story concerns an obscure matter of the setting's cosmology. The characters also lack nuance and development, despite the game's fairly long run time.

As one might expect, the overall plot is also a disappointment. The early chapters lack drive, and an extended gladiatorial sequence is almost fatally silly. Regular flashbacks break up the game's flow without delivering any real insights, and feature the game's dullest fights. A reasonably good reveal near the middle of the game is undersold by poorly-written dialogue and an elaborate cutscene that’s divorced from both the immediately surrounding action and the main plot issues at hand. The ending, though fitting, is a downer.

Alone, none of these issues would really be enough to sink a game, but in aggregate they push Blackguards

down into the realm of mediocrity. The underlying combat system is decent enough, but is poorly served by the scenario design and interface. The story has a few good moments but is structurally unsound, and the art fails to create a vibrant world for it to happen in. Blackguards is tolerable, if plodding, but I don't have anything nicer to say about it. Rating: 5 out of 10


Disclosures: A copy of this game was provided by the publisher and reviewed on a home-built Windows 7 PC equipped with an Intel i7 processor, 8GB RAM, and a single Radeon 6800 HD-series graphics card. Approximately 40 hours of play was devoted to single-player modes and the game was completed.

Parents: As of press time this game has not been rated by the ESRB. Blackguards contains plenty of violence, including several grisly character deaths, and blood spurts from characters and enemies when they are struck. It contains alcohol references and drug use. Male and female characters are depicted in underwear when all their armor is removed. None of this is especially hardcore, however, and the drug use is depicted in a negative light. I would personally rate the game T.

Deaf & Hard of Hearing: You should be fine. Every bit of significant dialogue is subtitled and no sound cues are essential.