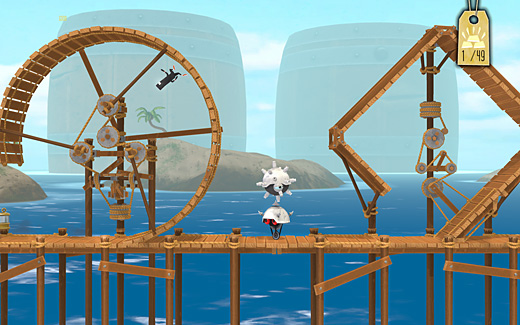 HIGH The perfect build and delicious release of "Only a Man."

LOW Hitting a retro cartridge by accident during a perfect run on high difficulty.

Sometimes it seems that games are so desperate to be taken seriously that they've forgotten about joy. The annual procession of grungy shooters, arch indies, and "mature" adventures never really brush up against the feeling of simple, unadulterated happiness, even though art should explore every aspect of emotion. Before sequels drained its magic, Katamari Damacy created joy using simple mechanics and graphics. Now Bit.Trip Presents Runner 2: Future Legend of Rhythm Alien

uses the interplay of music and motion to join the short list of joyful games.

Since the release of Bit.Trip Beat in 2009, the Bit.Trip series has been known for games with simple, retro-inspired graphics and demanding, almost brutal difficulty. Runner 2 shifts to a more contemporary graphical style and relaxes the challenge.

Although the polygon count has increased, Runner 2 remains essentially two-dimensional. In each of the 100 levels, series lead Commander Video or one of the game's unlockable characters careens down a narrow path at a fixed speed as monocled hills and cycloptic mountains leer from the background. Hitting any obstacle causes Commander Video to get jerked backwards to the start, or the mid-level checkpoint.

To dodge obstacles, the player can jump, slide, kick, and perform a few other actions. Successfully avoiding enemies and correctly performing certain tricks gives the player points, as does grabbing gold or "mode ups" that act as score multipliers. The player also earns points by making the character dance.

Runner 2 has a very broad difficulty curve that gradually builds these simple interactions into incredibly complex series of moves. On the lowest difficulty setting, the first level consists of just a few jumps, while the game's penultimate level demands a very precise choreography of buttonstrokes. In between, the player has 297 opportunities to build the expertise needed to meet that final challenge, and Runner 2 uses that breathing room to gradually introduce intricate elaborations on the game's seemingly simple inputs. 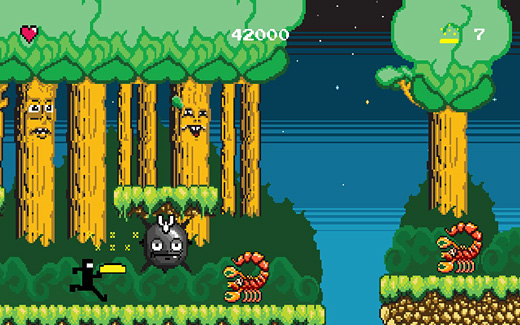 Runner 2 acknowledges even more granularity in the difficulty. Completing a level on any difficulty allows forward progress, and while the timing can get very tricky (especially in the late stages) Runner 2 never becomes excessively punishing. If a player who wants more challenge can grab all the gold bars and mode ups, a "Perfect" is awarded. Since these are individually recorded for each difficulty level, everyone has an incentive to explore both up and down on the scale.

More ambitious players can skip the mid-level checkpoint to earn more points and to do better on the game's leaderboards. Players at all skill levels can explore the levels to find alternate exits leading to new characters, and more challenging routes offer rewards like new costumes or access to the game's brutally tough "Retro" levels. This allows everyone to find the difficulty level that suits them without falling into a complacent rut.

That's important, because Runner 2's emotional hook works best when the player is succeeding. Whether dodging an obstacle or grabbing gold, the player's actions provide a rhythmic counterpoint to the level's music. At times, the interplay between audio, video, and action barely registers on a conscious level, but this synchrony makes the aesthetics of a perfect run as pleasing as the triumph itself. Most of the time it feels perfectly natural to make the characters dance in response.

When the elements don't work, however, Runner 2 becomes much less enjoyable. This was most obvious to me in the oppressively red "Mounting Sadds" zone, where a strong dependence on mechanical clicks and whirrs reduced the music's charm. The combination of an ugly palette and irritating audio made this area a drag to complete, and even more so to revisit for perfect runs.

concludes with its strongest zone, one that integrates the retro look of previous Bit.Trip games with the grand visuals of the new iteration. As the difficulty escalates through the area, culminating in a unique left-running boss battle, Runner 2 realizes the full potential of its synaesthetic design, and playing the game becomes an experience of joy. The characters dance on the screen, but the player dances with his fingers. Rating: 8.5 out of 10.


Disclosures: This game was obtained via retail download and reviewed on a home-built PC running Windows 7, equipped with an untweaked Intel i7 processor, 8 GB RAM, and a Radeon 6800 HD series graphics card. Approximately 20 hours of play was devoted to single-player mode and the game was completed.

Parents: As of press time, this game has not been rated by the ESRB. The game contains almost no violence or directly sexual content. One character has a costume that makes him look like a man wearing nothing but a pair of briefs and some shoes, and another character, though clothed, appears to have a giant scrotum. A third character has a vaguely scatological name. Despite these minor problems, I would personally rate the game "E for Everyone."

Deaf, Hard of Hearing, and Colorblind: The game should be playable without sound, but the interplay between the visuals and the soundtrack accounts for a significant part of Runner 2's aesthetic appeal, and also makes the game a bit easier. The "Mounting Sadds" region of the game has a predominantly red background, and even with good color vision I had difficulty seeing the yellow-tinted gold and fireballs at times. Colorblind individuals may find this area especially challenging.