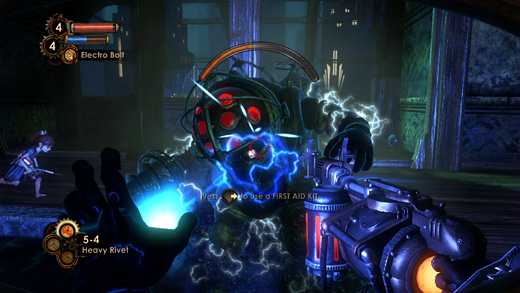 Andrew Ryan built the underwater city of Rapture on the ideal of the individual striving for achievement. In 2007, BioShock examined and repudiated that philosophy, depicting Rapture as a city doomed by its lack of a moral center. But Rapture did not die with the dream. BioShock 2 returns us to it, ten years after the events of the first game. The city is still inhabited by the crazed splicers, who modify themselves with fantastic powers using plasmids and the mysterious substance called ADAM. Now, though, they are united by an ideologue preaching solidarity. Instead of re-examining the original's ideas, BioShock 2 wisely shows us BioShock as seen through the looking glass, engaging ideals and systemic roles opposite to the original. It fails as a philosophical exploration of these opposites, but it succeeds as an emotional journey through them.

The only reliable source of ADAM in Rapture is the Little Sisters, children conditioned to harvest the precious substance from corpses. Due to the danger from splicers, mighty, armored Big Daddies have been assigned to protect these girls. As an advanced prototype Big Daddy named Subject Delta, the player has the strength to simultaneously wield weapons and plasmids, making for devastating combinations. Delta was pair-bonded to a specific Little Sister named Eleanor, and he must journey across Rapture in order to reunite with her or else die.

BioShock let the player choose to be a splicer, scrounging ADAM in exactly the same way as any other screaming, molten-faced nut in Rapture. BioShock 2 flips the perspective, because Delta can adopt other Little Sisters temporarily. On this side of the Rapture ecosystem, ADAM is gained by taking the girls to corpses where they can harvest the substance, which they will share with Delta so he can gain new abilities. These harvests, however, bring splicers crawling out of the woodwork (and occasionally spawning in obvious fashion). Although the player can cover an area in various kinds of traps, the waves of splicers quickly exhaust them. The ensuing firefight is always intense, even on the easiest difficulty level, thanks to artful staging and use of music. 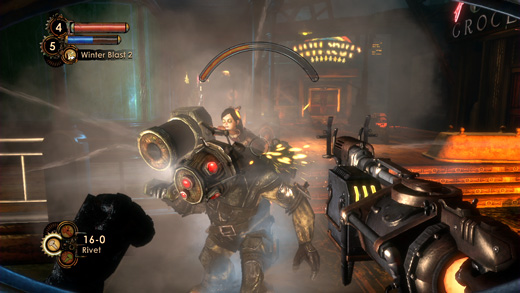 Once the Little Sisters have finished with the corpses, Delta can choose to rescue the girls from their conditioning or harvest their remaining ADAM (with fatal consequences). Here the developers clung too tightly to the source material, because this is the wrong moral choice for this game. Unlike the blank-slate star of BioShock, Delta has a known history and character, and especially in light of his conditioning I never felt like harvesting was something he would plausibly do. BioShock 2 should have turned its moral gaze towards the Big Daddies that the player must slaughter for access to a Little Sister. Massive and powerful as they are, the Daddies are also helpless and innocent; although the player is in a position to have a unique perspective on this, the game unattractively glosses over their deaths. Only the pretty little mind-controlled girls matter, it tells us, not the big, ugly mind-controlled men.

The pretty girl at the core of this story, Eleanor, is held captive by her "mother," Dr. Sofia Lamb, whose collectivist transhumanism stands in stark opposition to the individualist ideals of Andrew Ryan. As an overarching antagonist she is easily more loathsome than Ryan (or even Frank Fontaine), but the game never really manages to capture her philosophy as the original did for Ryan. Lamb claims to have the common good as her objective, but that's an incoherent statement unless we have some idea what the "common good" means. For all her talk, Lamb's perspective on that never becomes clear. Several times, Lamb takes actions that necessarily cause the deaths of dozens of her own followers, for no apparent gain. What common good does she envision coming from that?

Lamb's counsel, moreover, offers fulfillment of individual wishes. She offers Grace Holloway a family, encourages Simon Wales to take the orders, and dangles her approval before the smitten Gil Alexander. These people become her fanatical devotees and Delta's antagonists, their fate eventually left to the player's decision. Because Lamb's beliefs are so slippery in practice, it's never clear whether they're fanatically held or just cynically displayed; she seems to waver between these extremes over the course of the game. 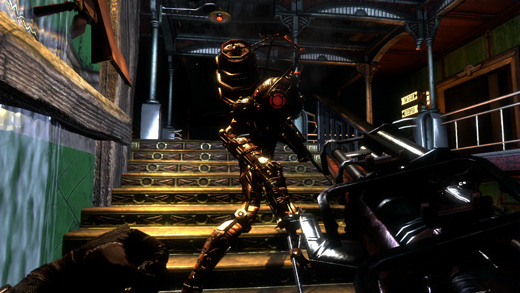 When Delta reaches Dionysus Park, once the site of Lamb's own artistic commune, it seems like we might finally get a handle on her utopian vision. This should have been a place that articulated Lamb's collectivist ideals with shared spaces for living and creative endeavor. Unfortunately, the game stumbles badly and we get a smaller, emptier version of Fort Frolic, covered in seaweed, and an order from the game's least interesting villain to kill three Big Daddies. Here alone this game seemed to be a lazy rehash of the first installment, a BioShock 1.5 rather than its own independent entity.

Failing to coherently articulate Lamb's philosophy doesn't hurt the game, because BioShock 2 isn't in a position to say much about her thinking—the first-person shooter represents a style of play based on the idea of individual exceptionalism. Attacking Ryan's philosophy from the position of play that assumes its truth was brilliant and subversive, but it's begging the question when it comes to collectivism. The individual's triumph over Lamb's "Rapture Family" doesn't mean anything because a superior individual overwhelming a massive group of enemies is what must happen in this kind of game. Unable to critique the philosophy, BioShock 2 instead succeeds by approaching family emotionally, from the position of parenthood.

The plasmids, weapons, and raw strength of Subject Delta make him feel big, but for BioShock 2 the operative term is "Daddy." Like any child, Eleanor looks up to her "father" and takes after his example. When the game nears its end and she takes a larger hand in the proceedings, her choices will be based on what she has learned from Delta. BioShock 2 upends traditional RPG tropes with the idea that in shaping ourselves we also shape others.

In the culmination of this story BioShock 2 outdoes the original and establishes its own worth, with a closing sequence that hits every note perfectly. As the city's last secrets are revealed, the effects of the player's choices unfold with marvelous impact. The choices Eleanor made filled me with pride and horror beyond anything I had felt in making those same choices myself. The final battle recaptures the incredible intensity of the harvest sequences while giving a nod to Dr. Lamb's ideas. It's no singular man that must be confronted in the end, no "boss." The whole city is the enemy, and the only victory is to escape from Rapture's sea of broken dreams. What will emerge from that undersea cocoon will depend on your example. Rating: 9.0 out of 10.

Disclosures: This game was obtained via retail store and reviewed on the Xbox 360. Approximately 32 hours of play was devoted to single-player modes (completed 2 times) and 0 hours of play in multiplayer modes.

Parents: According to the ESRB, this game contains blood, intense violence, sexual themes, and strong language. Drinking alcohol benefits the player's reserve of health and special powers, although drinking to excess causes a blurred screen effect. Part of one level is a red light district and involves an extended tour of a brothel. Some dialogue has a sexual subtext that may disturb players. Also, there are little girls drinking blood out of a syringe, which never stops being creepy.

Deaf & Hard of Hearing: All major dialogue is subtitled, but audio cues that have no on-screen counterpart provide important information about the approach of certain enemies (spiders, houdinis) and security apparatus. In addition, enemies respawn frequently in cleared areas; the only warning of this is hearing their dialogue in the distance (no subtitles). Hard of hearing players may therefore find the game more difficult. Also, Negative Gamer's Wardrox has reported that color-blind players may have difficulty with the hacking minigame.

@ little mommy: Thank you very much. @ Crofto: I’m glad you like the review; as for your opinion of BioShock, I have a feeling we’ll be stuck at de gustibus non est disputandum. I agree with you that BioShock couldn’t be made into a very interesting movie, but I don’t view this as any kind of comment on the quality of the narrative. Beethoven’s Pastorale symphony tells a magnificent story that wouldn’t even make a halfway-decent children’s book, let alone a novel. This is not viewed as a deficiency, because we accept that the modes of experience of different… Read more »

BioShock was one of the few games I’ve played that did a good job with political commentary. Nice to hear that the sequel keeps up the good work in that regard.

This is an extremely well written review, and a joy to read; it’s just a shame that I don’t agree with it. The original BioShock is one of the most overrated FPS games in recent times. Unfortunately, there is a nasty trend with gamers in that if you shoot something and there’s a story beyond shouting space marines then they seem to think that automatically makes a game “atmospheric” and sophisticated – it doesn’t. BioShock as an FPS was very poor when compared to, say, Half-Life 2, which has much tighter, fluid and enjoyable combat. On the other side, the… Read more »

What a fantastic review – Sparky crtically engages with the game’s themes and cleverly brings out its strengths and contradictions.

This is not only the best review of the game I’ve seen, its better than Chris Thompson’s recent Slate article on it.