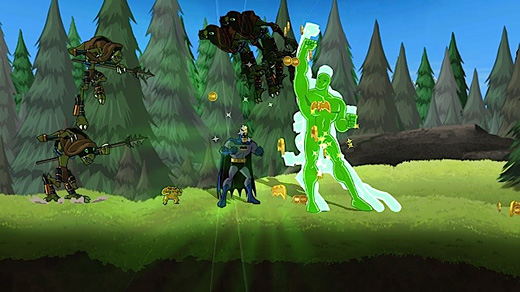 HIGH Watching what looks like a separately animated scene reveal itself as part of a level.

LOW Episodes that hang around long after they've stopped being interesting.

One could almost say that The Dark Knight Returns was too good. In the wake of Frank Miller's seminal work, popular portrayals of Batman have focused on the brooding badass interpretation almost to the exclusion of all others, but this ignores a fairly rich history depicting Batman as a lighter, funnier character. The campy but extremely memorable live-action TV series has perhaps given this take a bad reputation in recent times, but Batman's darker interpretation has its own excesses (notably Miller's own All-Star Batman & Robin). Airing on Cartoon Network in recent years, Batman: The Brave and the Bold leaves grim and gritty behind and imagines the character as an irritable, sharp-tongued, but fundamentally good-natured fellow. The game of the same name captures that spirit almost perfectly.

Batman: The Brave and the Bold is derived in name and concept from a long-running series of superhero team-up comics from DC.  Each episode of the TV series partners Batman with one of the DC Universe's lesser-known heroes, usually in combat against one of its more obscure villains. In keeping with this concept, The Brave and the Bold is a co-op 2D beat-'em-up offering players the opportunity to team up with Robin, Blue Beetle Jaime Reyes, Hawkman, and erstwhile Green Lantern Guy Gardner. Using a special attack, players can summon even more denizens of the DC B-list. The villains are also an unfamiliar crew, with principal antagonists that include Grodd, Starro, Gentleman Ghost, and Catman.

The game is divided into episodes that follow the general scheme of the show: a short battle against a minor villain to start followed by a more involved story. The Brave and the Bold even keeps the series's title sequence and jazz theme music. The animation connection is supported by WayForward's hand-drawn art style, which sparkles here even more than it did in A Boy and His Blob. Unfortunately, the game doesn't sustain the show's snappy pace.

Part of the problem is that The Brave and the Bold has a fairly limited palette of actions. Platforming is generally light and somewhat floaty, and the fighting is fairly simple. WayForward makes good use of the Wii's control capabilities to allow for some combat variety if so desired, and occasionally Batman must use one of his special tools to open a door. However, anyone can make it through most levels by mashing the A button and throwing an occasional Batarang. This is particularly true if another human jumps in to replace the rather passive partner AI. As a result, experienced players will find little challenge in navigating even the most densely coiled levels in the game, and inevitably may even start to feel somewhat bored. The fairly funny and well-delivered banter between Batman and his teammates helps a bit, but in most episodes the levels are too many and too long for what they offer in terms of entertainment.

Of course, The Brave and the Bold is really intended for younger players, an aim evident in the simplicity of its structure, gameplay, and extremely forgiving difficulty. If anyone's health runs out, there's no penalty beyond a few seconds of downtime and the loss of 100 collectible coins (if they have them.) While the younger focus probably contributes to the game's refreshing tone, it also means adults must roll their eyes through some well-worn discussions of what it means to be a hero.

Annoyances aside, Batman: The Brave and the Bold is a fun romp through corners of the DC Universe, in terms of both characters and characterization, that have been underutilized. The game will not reward those who want deep gameplay or devotees of the self-important, ostentatiously dark depiction of Batman. However, fans of the TV series and those who want to experience the lighter side of the character without a punishing challenge will find much to appreciate. Rating: 8.0 out of 10.

Disclosures: This game was obtained via retail store and reviewed on the Wii. Approximately 12 hours of play was devoted to mixed modes (completed once).

Parents: According to the ESRB, this game contains cartoon violence and comic mischief. The whole game is basically Batman and pals punching goons, gorillas, ninjas, and aliens in the face. There's nothing particularly scary or gruesome. The game's structure favors short play periods, which may be a welcome feature in households where play time is strictly monitored. Also, the game is probably simple enough for parents with little gaming experience to play alongside their kids.

Deaf & Hard of Hearing: Just about everything has subtitles and no sounds are crucial to gameplay.