Nose First into the Dirt 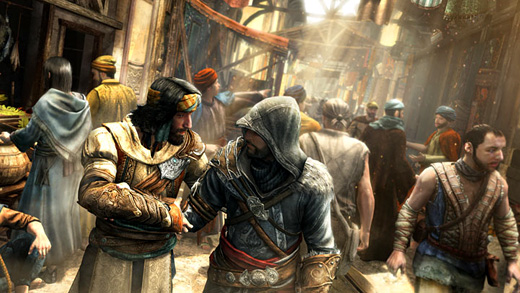 HIGH The moment I decided never to touch the Desmond missions again.

LOW Losing a race to someone who isn't actually going through the checkpoints.

WTF Spawning, losing my contract, and getting stabbed in the face within the span of about ten seconds. Doesn't this sound familiar?

proves that although Ubisoft hasn't yet perfected the art of running a franchise into the ground, they're trying to get better at it. The game is a shameless cash-in, a sequel made for no reason other than to snatch an extra $60 out of fans' pockets, with no material improvements or artistic justification to back it up. Instead, the old carcass has been reheated, garnished with a handful of irrelevant, slipshod features, and presented as a fresh dish worth the full purchase price. It is not. Assassin's Creed: Revelations is a bad game in its series, and a mediocre game, period.

To be sure, Revelations still has the core Assassin's Creed gameplay. Although principal character Ezio Auditore da Firenze has passed middle age, he clambers around the rooftops of Renaissance Constantinople killing conspiring Templars. The game has all of the same problems as its predecessors: imprecise platforming, dodgy aiming, and repetitive combat.

To make up for the lack of core improvements, a bomb-making feature has been added. Unfortunately the bombs are neither distracting nor damaging enough to justify their addition. Moreover, every time it would have been useful to have one of the special-purpose bombs, it wouldn't be in my inventory, and there would be no bomb-making table handy.

Shoddy implementation also mars the thoroughly dull tower-defense mode that sees Ezio stationing Assassin soldiers on the rooftops to ward off encroaching Templar forces. Unit selection and placement is awkward, and the mode's difficulty seems out of balance, given that the player might not have many chances to learn how to play it. More to the point, the enormous, bloody street battles that take place in this mode seem thoroughly out of place in a game about conspiracies and political murder. The tower-defense motif also seems dissociated from the series's core platforming and fighting gameplay. 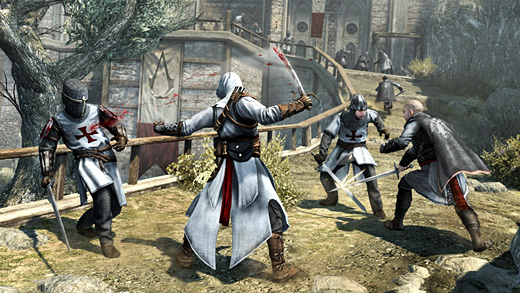 Much the same can be said of the Desmond sequences, where the game morphs into a clunky first-person platformer mixed with a rudimentary puzzle game. I found these levels to be positively excruciating play experiences, deficient in both mechanics and level design. Movement felt clunky, and the greatest challenge in most rooms was figuring out where I was supposed to be going.

Worse, the reward for completing these levels is insight into Desmond Miles. The central escapist fantasy of the Assassin's Creed series has always been the idea of living the life of someone more interesting than yourself. Desmond, who has relived the lives of his ancestors Ezio and Altair ibn La'ahad, is correspondingly the least interesting character in any of the games, possessing the personality of a potato and less soulful eyes. Here we learn that he actually seethes with absurdly self-absorbed angst, making him both dull and insufferable.

This description also serves for the game's plot, which limps along doing most of the same things Assassin's Creed: Brotherhood did, without the colorful villains or storylines to back it up. The story's actual antagonist isn't revealed until the game is nearly over, and is promptly dealt with via an absurd deus ex machina. The vignettes showing the continuing trials of Altair work well, and the game does manage to send both him and Ezio off in satisfying fashion. These are brief triumphs, however, in a game of boring missions and tiresome exposition. The dull gameplay and tedious dialogue often end up occurring simultaneously, as in the many missions that primarily consist of Ezio walking around and conversing with one of his acolytes.

Brotherhood was elevated by its unique multiplayer offering, but the same cannot be said of Revelations. The basic gameplay is the same, although only one of the new modes (Assassinate) actually rivals any of the originals. Even the returning game types, however, have been hurt by changes to the progression. 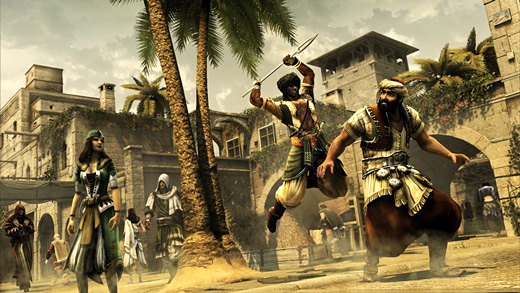 Brotherhood suffered from a benign redundancy, in that the experience and challenge trees were both perfectly good ways to measure player advancement. Revelations mucks things up with a third system: "Abstergo Credits" earned after every round. Now experience gains only unlock new features, that must then be paid for with these credits. Much effort seems to have gone into developing a dizzying array of utterly useless crap to spend this faux currency on, which makes me wonder how much Ubisoft will charge players to buy credit packs in the inevitable monetization scheme.

Revisions to the skill tree have made Revelations tilt towards high-level players, which the game tacitly acknowledges because players initially receive a default loadout containing skills they cannot buy for their own custom use until level 17. The tree also puts the abilities that are most punishing to roof-runners at fairly high levels, producing frenetic, acrobatic matches that lack the carefulness and paranoia that made Brotherhood's multiplayer unique and worth playing.

The fundamentals aren't just unimproved; in some cases the game works noticeably worse. Moving groups were a particular problem. I found that their dynamics consistently produced chaotic, milling masses even in the absence of obstacles, making blending with them almost pointless. I played some escort games where VIPs did not respawn, contract-based modes where I waited upwards of 30 seconds for a new target, and other contract modes where I was killed before being notified that I had any pursuers. The menus in the multiplayer are also a mess, in part because they have been larded up with so much useless crap to purchase. While the matchmaking has gotten better about avoiding the endless waits that plagued Brotherhood, it still happily dumped me into games against players 40 levels higher, or ones that ended less than 30 seconds after I joined.

Like the Templars the Assassins struggle against, Ubisoft has let the thirst for money and power overtake whatever nobler intentions they may once have had. Assassin's Creed Revelations

is not an outright bad game, but neither is it a good one. In a series that has seen this many interesting ideas, such mediocrity amounts to a disaster. Thanks to slipshod implementation, none of the new features in Revelations improve the Assassin's Creed experience, and some make it noticeably worse. As such, the only thing that Revelations really adds to the series is the feeling of being cheated. Rating: 5.0 out of 10.


Disclosures: This game was obtained via retail and reviewed on the Xbox 360. Approximately 20 hours of play was devoted to single-player modes (completed once) and 9 hours of play in multiplayer modes.

Parents: According to the ESRB, this game contains blood, language, mild sexual themes, and violence. This is a game about a man whose life is defined by the fact that he stabs people. The body count is tremendous, and while some of the killings are treated with respect, there is an awful lot of casual murder. The multiplayer is actually a bit more graphic than the campaign, and of course Xbox Live is still populated by the most foul-mouthed little runts you can imagine.

Deaf & Hard of Hearing: Subtitles are available for crucial cut-scenes, and the single player has no serious reliance on sound. The multiplayer has some helpful, but very subtle, sound cues (heartbeats, whispers) that have no visual equivalent and may put hard-of-hearing players at a competitive disadvantage.

The problem within ACR is this: THE STORY IS FULL OF PLOT HOLES. Read the codex people. It was never two Apples. If you see the first box of the apple that Ezio sees coming from Cyprus in AC2, it’s the same box of the Apple that Al Mualim in AC 1 puts it. A box with a cross and wings. It’s the same box. Altair in the codex said that he would take the apple to Cyprus. in ACR, suddenly, there is TWO Apples. No. All wrong. Alright you have Lucy saing that the Apple in AC1 the templars… Read more »

Although I appreciate this very critical and good review of a game that in other media circles usually gets a “7-9”, there are many inconsistencies with the arguments presented here. “Assassin’s Creed Revelations is not an outright bad game, but neither is it a good one. In a series that has seen this many interesting ideas, such mediocrity amounts to a disaster” I for one would like to know HOW the game can simultaneously be “not bad” as well as a “disaster”? There are many other examples of this, and it would be more interesting to read a carefully constructed… Read more »

While I do agree that Ubisoft is getting to the point where they are clearly detrimentally milking this series for all it is worth, I absolutely think that the above comment perfectly encapsulates what makes ALL the Assassin’s Creed games (with the possible exception of the first one) so brilliant. I absolutely play the AC games because I get major jollies from experiencing the newest masterfully realized historical location & era. I agree that the gameplay needs refinement, and that it really looks bad for the developers that after 4 games many of the same problems STILL remain, but man–the… Read more »

Assassin’s Creed would be an amazing franchise if Ubisoft would give the developers time to refine the gameplay.

As someone in the creative field, I know what it is like to have a suit breathing down my neck pressuring me to “just get it done” and having stuff released half-baked.

All they see is the dollar sign. As flawed as Assassin’s Creed is, it still sells millions of copies.

No artistic justification? Did you play with the tv turned off? The ancient city of Constantinople has *never* (to my knowledge) been created in video games before, let alone with such amazing attention to detail and dedication to authenticity. Well if that isn’t creative then it still warrants some praise for originality right? And were you deaf to the masterful soundtrack? While I respect your dedication to the gameplay, the graphical and musical elements of a *video* game are critical, else you are left with an adventure game book! These AC games however transcend brilliant visuals and music. If you… Read more »