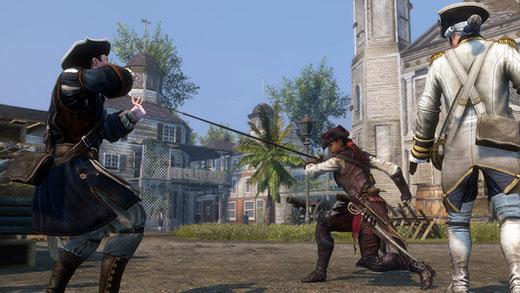 LOW Ugh, a mission with Connor.

WTF So I guess I just exit this warehouse and… OH GOD A BEAR!

Assassin's Creed, as a series, is not in a particularly good place right now. The third game in the series was a mess, worth playing only for the still-strong multiplayer. Black Flag has provided a kind of redemption, but really it's the pirate gameplay and not the assassinating that makes it worthwhile. Perhaps as a kind of apology, Ubisoft has decided to rescue the series' only Vita entry and rework it for home consoles as Assassin's Creed: Liberation HD

. Although in Aveline de Grandpré it has a stronger lead than the recent games and handles the core assassin gameplay better, Liberation still falls short.

The graphical upgrade is largely effective, but Liberation's roots as a handheld title show through in plenty of ways. It has only three major locations, and they all feel a little small. The game's flow also hemmed me in, especially in the early going, and doled out new side activities and collectibles rather slowly, probably to prevent me from exhausting the open world too quickly. Ambient dialogue is limited and tends to repeat, and the collectibles and database entries are also disappointing. The transition to home platforms also seems to have created a fair number of irritating bugs.

Although the world is significantly less expansive than other AC titles, it at least feels interesting. New Orleans departs from the ongoing trend towards sparse assemblies of disconnected buildings to offer more traditional roof-running than Assassin's Creed has seen in a while. The bayou is also full of pleasing variety, something which is also true of nearly all of this game's vantage points. Here perhaps the smaller world makes the game better, because unlike the templated viewpoints that drag down the main series, Liberation makes each a unique and interesting climb. Consequently, I enjoyed Liberation's bayou far more than ACIII's forest.

Liberation also adds variety by allowing Aveline to use three different 'personas' with differing abilities. In assassin gear, she has access to her full arsenal of weapons but will always be noticed quickly by the guards. Dressed as an upper-class lady, her physical capabilities are seriously limited, but guards almost never suspect her and she can lure men to move out of her way. When she dons slave garb, Aveline can only use small weapons, but gains the ability to blend into crowds and even hide in plain sight just by carrying something.

The three personas provide different ways to solve many of the game's missions, and each has its own specific side missions and (largely disappointing) collectibles. Liberation is also fleshed out by sidequests that allow Aveline to purchase stores, and a trading minigame that's thin and inconvenient to get to. This is necessary padding for a campaign that feels rather short and, in places, somewhat sketchy.

Several of the campaign's key missions are among the best in the series, but the workaday stuff leading up to those is still something of a bore – follow this guy, stab this intermediary, find this target with eagle vision, and so on. Although the individual chapters make an effort to pull the player along, their narrative and mission structure is weak, and links between the different chapters feel tenuous at times.

This narrative weakness is a shame because Liberation feels like it has potential in its story that the last several entries have been lacking. Aveline is a more interesting protagonist than any of the Kenways, and the challenges posed by her race, gender, and class in colonial New Orleans are worth exploring in greater detail than the game manages. Even so, I found the story affecting, the reveal of its central twist satisfying, and many missions along the way highly enjoyable. Even the narrative references to the modern day Abstergo (usually something I can barely stand) actually came across well.

That said, mission design falters towards the very end of the game. A mission with Connor features scripting and level design so bad it seemed to have been made by a different team, and the game's closing sequences lean far too heavily on combat that's still plodding and over-animated, relying too much on counter-kills rather than offense.

won't change anyone's mind about the Assassin's Creed series. It clings closely to the style of the series' earlier entries, but feels cramped even in comparison to those games. Aveline's ability to shift personas is less a game-changer than an interesting wrinkle, and the bulk of the adventure falls into familiar gameplay territory for the series. Although it handles the assassin aspect a bit more deftly than either of the last two main AC titles, Liberation's small world and threadbare structure hold it back. Aveline deserves better. Rating: 6.0 out of 10


Disclosures: This game was obtained via retail purchase and reviewed on the PS3. Approximately 12 hours of play was devoted to single-player modes (completed once). The game has no multiplayer modes.

Parents: According to the ESRB, this game contains intense violence, blood, suggestive themes, language, and crude humor. Like most games in the series, Liberation HD involves a lot of stabbing, choking, poisoning, and shooting. Teenagers and up only.

Deaf & Hard of Hearing: You should be fine. Important dialogue (but not ambient) is subtitled, and there are not really any essential sound cues. There is a mildly helpful audible warning in the swamp when an alligator is near, but the gators are actually quite easy to see so this is probably not a major issue.