We are a Crowd of Knives 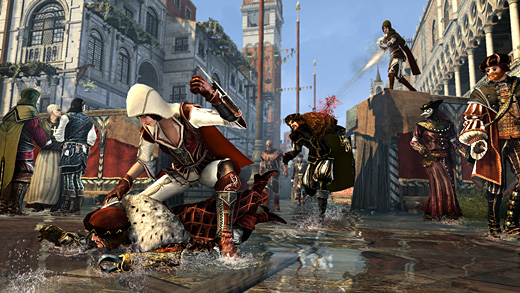 HIGH Finishing a round of Manhunt with no deaths.

LOW Pulling off the tank mission almost perfectly, only to be hit and fail the full synchronization objective at the last second.

WTF Spawning, losing my contract, and getting stabbed in the face within the span of about ten seconds.

Assassin's Creed II ended without resolving any of its plot threads. The game's lead character, Ezio Auditore, escaped from Rome without killing his nemesis Rodrigo Borgia (Pope Alexander VI). His descendant, series lead Desmond Miles, hit the road to escape a vast right-wing conspiracy and save the world from some vague problem with the sun.

sends Desmond on a search for a powerful artifact in both Ezio's memories and ancient Italian ruins, which amounts to an extension of the previous game rather than an improvement on it. Brotherhood's multiplayer component, however, delivers a fascinating and engaging experience unlike almost anything else.

Alexander VI and his family are remembered as examples of the Roman Catholic church at its most venal and corrupt. A game about the conspiracies surrounding this Papacy, set in Rome itself, would seem to be a golden opportunity to highlight parallels to the Church's present-day abuses of its power and moral authority. Of course, Assassin's Creed: Brotherhood has no interest in serious commentary, preferring to serve up more rewarmed sci-fi corporate conspiracy gobbledygook that is completely disingenuous coming from a committee-constructed product of a multinational corporation.

As for the Borgias, their in-game plans are hazily defined by the meandering plot, and their final fall from grace comes as an inexplicable surprise following the game's least interesting missions. Brotherhood eventually offers Ezio his revenge, but the moment fails to satisfy because one of the title's few narrative successes is in showing that the emptiness in his life has other causes. The befuddling coda in which Desmond climbs around several sites while a hologram screams vague complaints and prophecies at him ends the frame story on an even lower note than its predecessor. 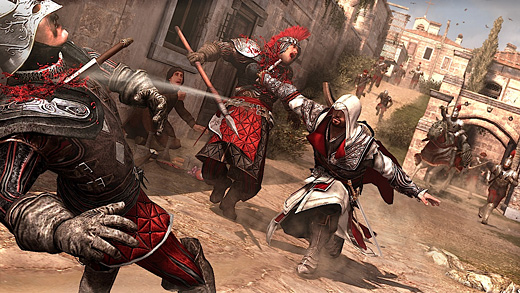 While the story ends in an unsatisfying fashion, it was also disappointing to find that the gameplay does little to address the few aspects of Assassin's Creed II I disliked: it's still occasionally impossible to tell whether a climbing route is valid just by looking at it, and Italian is still randomly interjected into the English dialogue. Worse, the game's tendency to value the developer's script over the player's creativity is even more evident in its chase segments and intermediate objectives. The combat has improved, or at least it takes less time to get through it, thanks to the introduction of a new sequential-killing technique. Besides that upgrade, the new additions to the core Assassin's Creed formula mostly disappoint, however.

The introduction of additional objectives to get full credit for each mission is a particular problem. These objectives vary wildly in difficulty, even near the end of the game, and many (most prominently those for the very difficult Leonardo missions) add more frustration than replay value. Although it doesn't affect the game's progress, completing a tough mission only to see a giant "Failed" on the result screen is quite irritating.

Additionally, the implementation of these objectives is not solid. In a few cases, I was told I had succeeded at the optional objective when I was sure I hadn't. Similarly, the game sometimes did not seem to recognize that I had met the conditions for full synchronization. This included one memorable instance in which I killed my target with the hidden blade and was immediately told I had failed the objective because I hadn't killed my target with the hidden blade.

The "Brotherhood" of the title refers to Ezio's ability to recruit and manage a team of apprentice assassins, but even this new twist doesn't satisfy.

While raising your fist as a signal to drop a deadly killer onto an unlucky guard never gets old, the assassins that Ezio can recruit are essentially indistinguishable from one another, and although they level up as they complete missions in other European cities, the player can't make any meaningful decisions about them aside from the order in which they receive their preset equipment. Preparing for missions is just a matter of using a text interface to send as many killers as it takes to get the success meter up to 100%, although the game occasionally spices things up by making them fail anyway. A greater ability to customize the recruits' gear and talents would have gone a long way towards making this segment of the game legitimately interesting. 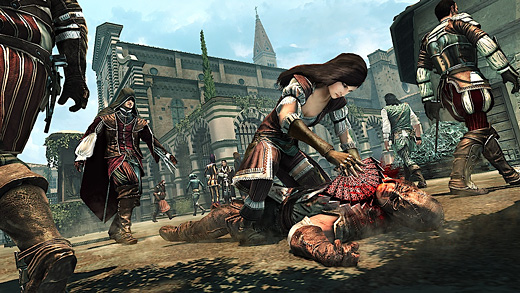 Thanks to Brotherhood's substantial amount of single-player content and the opportunities to improvise when the developers took their hands off my controller, I didn't find any of the above issues especially disappointing—although completionist players are more likely than me to hate the extra objectives. What I do not enjoy, generally, is multiplayer gaming, particular the dominant shooters. Here Brotherhood was a very pleasant surprise.

In most cases, a game's multiplayer component is related to the single-player campaign solely by mechanics, but here the mechanics of multiplayer are informed by the ideas of the game's plot. The paranoia and conspiracies of the story are reflected in the hide-and-hunt gameplay, in which players seek out targets while trying to remain disguised in the crowd. A player can get plenty of kills by approaching the multiplayer with the single-player game's parkour skillset, but the real score bonuses lie in taking out your targets without attracting undue attention.

The "Manhunt" mode, in which one team of players must hide while another team tries to kill them, is the greatest success, because it explicitly rewards players for behaving conspiratorially. Players who hide near one another earn extra points and gain tactical advantages against their pursuers, to such a degree that it is sometimes more advantageous to let yourself be killed (so that your ally can stun your exposed foe) than to run from an attacker who's already on the hoof.

This doesn't mean Brotherhood is an unqualified success. Running around on the rooftops like a maniac is still a bit too viable for my taste. The leveling system feels like it was thrown in simply because such approaches are de rigeur presently, and as is typical it rewards sheer bloody-mindedness almost as efficiently as it does skill. This was a particular surprise because the "Challenges" that encourage varied approaches to play would have served wonderfully as a means of progression, without any need for a separate experience system. The matchmaking is also incredibly inconsistent. It felt like the bulk of my playing time was spent waiting for games to get set up, and I often ended up being thrown into a game mere moments before it ended.

My frustration with the matchmaking, however, is a sign of my eagerness to keep playing. That's not because a few more rounds might net me enough experience to change the color of the barber's vest, but because each round of the multiplayer is an engaging challenge for the mind as well as the fingers. Viewed as a single-player experience, Assassin's Creed: Brotherhood

is a sizable addition that does relatively little to advance the Assassin's Creed story or gameplay. The multiplayer, however, is a unique and fascinating offering, a truly refreshing alternative to the plodding iterations of the market-leading shooters. For that alone, it deserves your attention. Rating: 8.5 out of 10.

Disclosures: This game was obtained via retail store and reviewed on the Xbox 360. Approximately 24 hours of play was devoted to single-player modes (completed 1 time) and 13 hours of play to multiplayer modes.

Parents: According to the ESRB, this game contains blood, sexual themes, strong language, and violence. Look, you can't have any illusions if you've taken a look at the title. The hero of this game is a professional murderer who commits casual murders to relax in his spare time, and his antagonists do their level best to make that behavior seem reasonable. There's lots of death, plenty of blood, and a guy who wants to hop in the sack with his sister. Leave this one for your older teens.

Deaf & Hard of Hearing: There are no essential audio cues and subtitles are available for most of the main dialogue. However, the majority of the ambient sound is not subtitled, so hard-of-hearing players will miss out on some of the game's character. Good hearing is of some benefit in multiplayer, particularly in Manhunt where the sound alerting you that you are within sight of your target is an important adjunct to the on-screen compass.

I feel like this is the question you’re really asking, Crofto, because as far as the actual gameplay goes, the text of my review addresses most of the points you’re making. The exception is the pop-in, but that problem can’t realistically be addressed in an expansion that keeps the same underlying engine. If it had only been a single player game, I would probably have given Brotherhood a score around 6 or 7, because it doesn’t really expand the gameplay in any interesting directions or correct its existing flaws. However, it also doesn’t lose any of the things that made… Read more »

The first game needed some polish the next 2 need alot of polish for all the disjointed filler they tried to hem in. Filler dose not need to distract from the main arch of the game.

[quote]Why does someone have to be wearing tinted glasses to like a game?[/quote] They don’t necessarily; I can fully accept that someone can like AC to any extent they like, be it 8/10 or 10/10, the difference is I expect that from a gamer, not a critic. Someone just playing the game normally will tend to just ignore the flaws and focus on the good stuff, which is great for them, but for me I want to read a review of the game like I would for a film; I’m wanting to know if the design is good, if the… Read more »

[quote=Crofto]Was hoping Brad would be the one to review this since I think his take on these games is one without the novelty-tinted glasses that most people seem to be donning. Same deal for Jim Sterling not doing the review over on Destructoid, and thus the game ended up with an absolute embarrassment of a review. Meh. Btw, not saying this is an embarrassment of a review.[/quote] Different strokes for different folks. Why does someone have to be wearing tinted glasses to like a game? Personally, I love the Assassin’s Creed games. Yes they do have their shortcomings, but to… Read more »

Was hoping Brad would be the one to review this since I think his take on these games is one without the novelty-tinted glasses that most people seem to be donning. Same deal for Jim Sterling not doing the review over on Destructoid, and thus the game ended up with an absolute embarrassment of a review. Meh.

Btw, not saying this is an embarrassment of a review.