The Space is a Lie 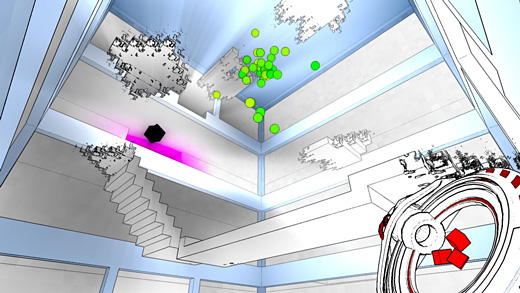 HIGH Figuring out "Breaking the Arc."

LOW Any time I needed to precisely control the pulling ability.

WTF What is going on with this purple block?

In a commentary track early in Portal 2, Eric Tams explains that during the development of the game, as levels and links between them were being tweaked, Valve improved their workflow by linking everything together with portals. This eliminated the need to perfect level geometry, as the portals "could make any sort of impossible space work out." As the final design coalesced, Valve edited out the portals in favor of more conventional construction. Had they left the game in that realm of impossible spaces however, they might have ended up with something like Antichamber.

Antichamber starts with a lie that teaches the truth. The player who obeys the big block letters in front of him won't be able to cross the gap. On a second visit, the letters change, and this time they suggest the correct course of action. In Antichamber, doing the obvious is just as likely to cause failure as success. There is no death here, however. Failing simply leads to a different experience, and challenges can always be retried until the player understands them.

To comprehend Antichamber's puzzles, however, the player will need to discard his pre-formed conceptions about space. While other games make the player's experience a contingent outcome of constructed spaces, Antichamber reshapes its spaces in response to the player's experience. How a room can be exited often depends on how it's entered, or where the player looks, or whether he jumps when ordered. The fundamental realization that breathes life into Antichamber's puzzles is that game spaces need not resemble real spaces in their organization or behavior.

That concept might have been too much to take if Antichamber had built itself around realistic vistas. Instead, the game's spare, almost sketch-like design points to a world of ideas rather than spaces. Antichamber's levels resemble a schematic drawing of themselves, and this architectural aesthetic shepherds the player into the proper frame of mind for dealing with the game's transformations of space and its traversal puzzles. 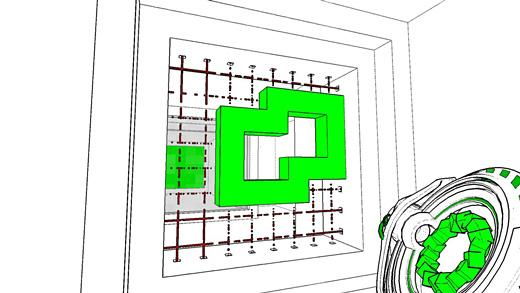 As helpful as that is, it also seems overly cautious. While it sheds expectations of continuous and sensible spaces, Antichamber often clings to safe ideas and approaches, usually to its detriment. As the game progresses, it becomes less about understanding the bizarre and shifting rules of its reality and more about solving puzzles with a gun that shoots and controls blocks. The moments of marvelous invention keep coming, but they are spaced with more standard challenges that feel almost plodding in comparison.

It's as if the game opened all the doors in a prison and then went back to sit in its cell. "We can make worlds behave any way we like!" Antichamber exults. "Now take this gun and shoot some colored blocks at a wall."

The spare graphic design also makes Antichamber feel antiseptic and cold, an impression barely alleviated by the occasional natural noises, or the cutely-drawn posters that occasionally show up on its walls. The images and text on these panels often obliquely hint at how to solve a challenge (as do the room titles that can be seen in the starting space). Just as often, however, the posters tell the player what he just did wrong, and as this is usually obvious, or contradicts another "lesson" offered elsewhere, the messages frequently come off as smug.

Antichamber's only human moments come when it displays its own history. Some of the most difficult challenges in Antichamber lead to rooms that show how it went from concept to game, offering a "peek behind the curtain" into how it got made. In light of these rooms, the glib posters seem to be less about the challenges faced by the player than about the obstacles overcome by Alexander Bruce himself.


Disclosures: This game was obtained via publisher and reviewed on a home-built PC equipped with an Intel i7 processor, 8 GB ram, and a single Radeon 6800 HD-series video card, running Windows 7. Approximately 13 hours of play was devoted completing the game twice. Initially the game failed to run; this was fixed by updating to the latest PhysX driver.

Parents: As of press time, this game has not been rated by the ESRB. The game contains literally nothing that I can think of that would be objectionable and therefore should be rated "E."

Deaf, Hard of Hearing (and Colorblind): Sounds are occasionally helpful in the game, but not essential. However, some puzzles may require the player to correctly identify the color of blocks that are blue, green, yellow, and red. Because these blocks have no other identifying characteristics, colorblind players may find the game unusually frustrating.