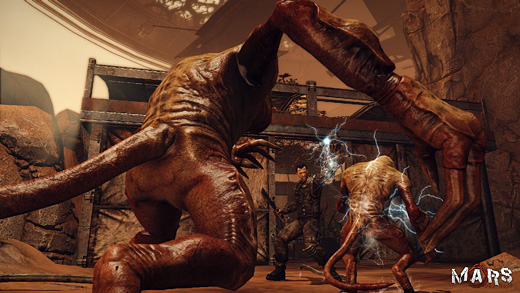 Mars: War Logs is a confusing game on many levels. It's set on another planet far in the future, but most of the fighting involves whacking dudes with a glorified stick. The player never sees the game's only real "war," and instead deals mainly with an internecine conflict concerning the main character Roy's guild. Yet, in the end, even the internal power struggles turn out not to have been the driving force for the game's violence. In a way, it's the anti-Mass Effect: a story of a minor player in a low-tech future where war is motivated by petty selfishness. The game's only major decision point, located at the end of the second act, is representative of its problems.

The first act of War Logs takes place in a POW camp, where Roy meets a young man named Innocence. They escape the camp together and flee to the town of Shadowlair, where both lived previously. In the second act, Innocence finds that his parents' home has been destroyed and they are apparently dead, due to an internal political conflict that followed the war. Innocence is determined to join the Resistance, and eventually does. Near the end of the act he gets captured during a botched Resistance operation. At this point, Roy has the option to either join the Resistance to hopefully spring Innocence from jail and remove the evil Technomancers from power, or join an internal military task force working towards the same end that promises to save Innocence with some timely politicking.

The problem with the second act is that it doesn't really do anything to lay out the stakes of this decision. Roy's interests at this point are 1) keeping Innocence safe, 2) fixing the injustice of the guild's current government, and 3) getting the Technomancers off his back. In order to generate a meaningful choice for the player, the game should at least lay out how each option speaks to these priorities. Ideally, the game will also set things up so that the two options are equally good (or equally bad) in different ways, forcing the player to choose, say, Innocence's safety over Roy's. But War Logs does almost none of this.

The game does at least a little bit of the legwork for the Resistance. Roy has to fight through their failed rescue operation near the end of the chapter, which at least demonstrates that the Resistance is hopelessly incompetent on its own. The player might conclude that their promised attempt to break Innocence out of prison will fail. Similarly, their ability to push the Technomancers out of power seems much in doubt. However, in the medium of video games, the player expects that as long as he is allowed to actually take part in the proceedings there is a possibility of success. So the futility of joining the Resistance is not entirely obvious. 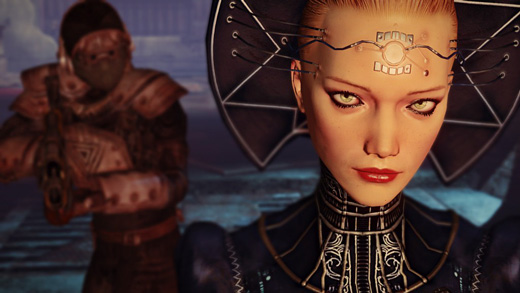 War Logs does very little to outline the actual ideals of the Resistance, however. What would they do if they were in power? What would it mean for the people of Shadowlair? A few lines of dialogue suggest that they believe in democracy, but that being the case it would be useful to know something about the people who are in charge of the movement. However, only a few terse words of dialogue are exchanged between Roy and the Resistance before the choice. As a result, neither the group's principles nor its principals receive any characterization before the player has to decide.

The other option, to work for General Honour, is even more sketchily defined. The game spends a few sentences here and there to explain that Honour was in part responsible for the guild's victory in the war, but it's not clear how that success will translate to the clandestine operation he's proposing. He seems well-positioned to sneak Innocence out of jail, but at the same time intimates that he may have been responsible for the death of the kid's parents. Where the Resistance seem incompetent, Honour seems untrustworthy.

Just as with the Resistance, the consequence of Honour reaching power is poorly defined. A dictatorship of some kind is likely in the offing, but whether it would be of the benevolent variety or not isn't entirely clear. Again, the game doesn't show what choosing Honour might mean in terms of the things Roy wants.

Part of the problem here is that both factions only get introduced at the very end of the second part of the game. The bulk of this chapter is instead taken up with sidequests handed out by Roy's friends and a few random strangers. That's unfortunate, because some of these quests could be used to establish the character of the different factions. For instance, at one point Roy gets tasked with clearing some druggies out of a metalworker's shop. As befits role-playing game convention, Roy receives this task by talking to some random guy standing on a streetcorner. Making the simple change of having him receive that mission from the Resistance would show their intention to protect the common man in a way the present authorities do not. What's better, it would let the player experience that intention. A similar approach, with similar effects, could have also been applied in the serial killer quest.

The serial killer quest could also have been a place to characterize Honour's approach. As the quest comes to a close, Roy must figure out whether a rich man or a poor drug dealer is responsible for the murders. One way to show Honour's nature would be for him to offer Roy an incentive to frame the poor one for the rich man's crimes, then blackmail the rich one to support Honour's faction. Similarly, a quest to gather evidence of a smuggling ring could be pitched as Honour's efforts to clear out criminals and protect the common man.

Just by slightly altering the quests that are already in the game, Mars: War Logs could have outlined what attitude the factions have towards the people of Shadowlair. If the game had also partnered Roy for these quests with the faction-specific allies that appear in part 3, it could have used in-quest conversations to help describe the factions further, while also laying some groundwork for the final part's romantic options. None of this ultimately happens. The second chapter of Mars: War Logs is instead squandered with irrelevant sidequests, and as a result its final decision feels empty and meaningless.